Making Up For Travel By Buying Political Activism Instead of ‘Offsets’ 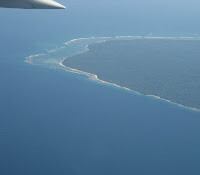 Air and Fire
After a few years with barely any flying, I greatly expanded my carbon ‘fly print’ this year with a big trip to Southeast Asia. And so I’ve been thinking about my impact.

When it comes to greening your travel, most lists (like this one at Gadling) suggest buying carbon offsets. I thought about doing this, but I’ve decided to do something else: I’m going to donate to a political action group.

The idea comes from climate activist, writer and deep thinker Bill McKibben. During the run-up to the nationwide Step It Up rallies in 2007, he was asked on a call-in show about the most effective personal action one can take to fight climate change. His answer was that even though personal actions are important, the most critical action is to “organize politically, organize politically, organize politically.” Without significant legislation that remakes the energy system, caps carbon emissions, and helps us work with other nations, the planet is in big trouble.

My first step is to use the on-line calculator at TerraPass to find my emissions and the offset price. The next step is to pick one or two organizations to receive the offset fee (and probably a lot more). The first one is easy: 350.org, a group co-founded by McKibben to work for legislation that aims to keep the concentration of CO2 below 350 parts per million (ppm). Other ideas include Repower America (the group with the upside-down ‘me’ logo) and Kyoto USA. Who else is doing great work?

Water and Earth
The trip also made me appreciate America’s excellent (but neglected and crumbling, as the ASCE reports) water infrastructure. Drinking from the faucet, washing fruit and vegetables with tap water, are things that are easy to take for granted. To be sure, the hardships we faced in Indonesia were nothing compared to what millions face around the world — it was simple and affordable for us to walk to a convenience store for bottle water, as opposed to the multi-mile walk or hours-long wait that many face (e.g., see this New Yorker article). So I think I should direct some of my charitable giving this year to groups with a water focus. Who are your favorite charities and NGOs that are working for clean water around the world?

Also on the subject of water, we found two locations in Ubud, Indonesia that were trying to fight the plague of plastic bottles (this photo by artist Chris Jordan gives a good idea). Roda’s restaurant (on Jalan Kajeng*) and Roda’s Internet shop (on Jalan Bisma) allowed you to refill your water bottles from reusable five-gallon containers for a small charge (2,000 IDR), less than half of the price of a new bottle (at least 4,500 IDR).

The photo above shows the southeastern tip of the island of Java (probably Alas Purwo National Park), taken during a flight from Yogyakarta to Denpasar.

* Next door to the remarkable Threads of Life gallery