Making Sense of the Swarm: Notes from Yogyakarta, Indonesia 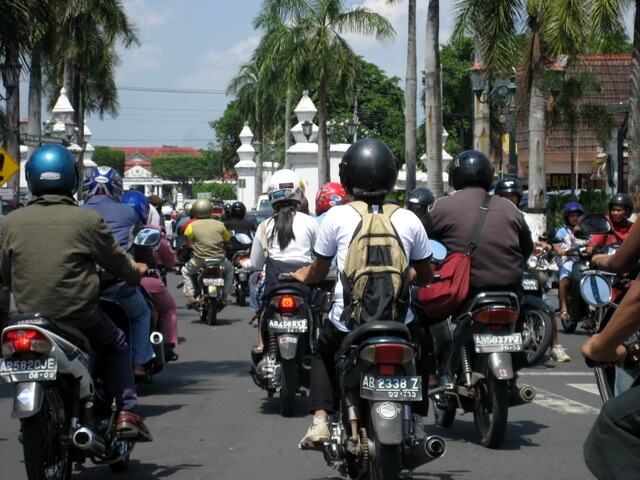 Almost as soon as you walk out of the airport, Yogyakarta, Indonesia immerses you in its chaos and liveliness. After a block or two of an airport road, you are cast into a sea of motorcycles (which carry all sorts of things, and all combinations of people), cars, bicycle taxis (becaks) and trucks, all somehow flowing without major incident. On the edges of the street, people do their shopping, fix motorcycles, grab a bowl of meatball soup with noodles and fried wonton (bakso), catch up with neighbors, smoke a clove cigarette. 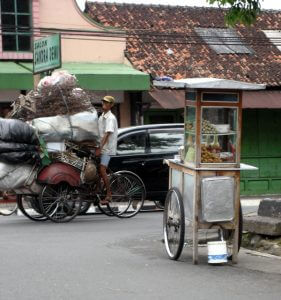 We went to this city of 500,000 in the middle of Java because it is close to two ancient religious monuments from the 8th and 9th century:  Borobudur (a Buddhist monument) and Prambanan (a collection of Hindu and Buddhist temples). It is also a cultural center of Java, especially in terms of batik painting, music, dance, and shadow puppetry (wayang kulit). (The city’s name might sound familiar because it was devastated by a major earthquake in 2006, as the New York Times reported at the time.)

The city also has its calm places, away from the hawkers and persistent becak drivers (“Hello mister, transport?”). While we were looking for the Water Palace one day, we somehow picked up a self-appointed guide to the area, and over the next hour he took us around the palace ruins and through the narrow alley of the neighborhood, giving us a brief look at another side of the city, where regular people do regular things (and also some extraordinary things, like painstakingly cutting and painting sheets of water buffalo hide into elaborate wayang kulit puppets). 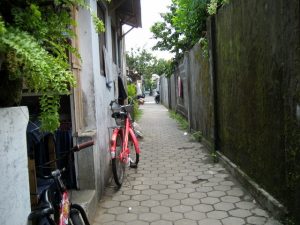 I’m slowly digesting what I saw, heard and smelled during the trip (which included time in Seoul, Singapore and Bali). Eventually, I’ll have some posts about the trip as I collect my thoughts and process my pictures (the best will be posted in my Flickr collection).