(Disclosure: I received a discounted International Food Blogger Conference (IFBC) registration fee in exchange for writing three posts about my experiences at the conference. All opinions are my own.)

This is part 2 of a 2-part series on a visit to an olive grove and olive oil processing facility in Yolo County, California. The first part was Tracking Olive Oil from Grove to Glass.

When you think of extra virgin olive oil, do images of the Old World come to mind?  Do you imagine of rolling hills with ancient gnarled trees, massive stone presses driven by donkeys walking in circles, and a workshop of vintage machines? For one reason or another, those were sometimes the pictures in my mind until I visited an olive oil processing plant and saw the real situation:  lots of stainless steel, clean concrete, and very large machines built specifically to process oil.

On the second part of the olive oil excursion organized by the International Food Blogger Conference (IFBC), the group of food bloggers got an quick tour of Boundary Bend’s1 relatively new, $15+ million processing plant in Woodland, California. Although the 2017 olive harvest was a few weeks away, our timing was good because the plant was in the middle of “practice runs,” where they use low-grade olives from various sources to test the equipment — the team needs to make sure that each machine is working right, that every employee knows his or her job, and so forth. These rehearsals are important because when the 2017 harvest hits their loading dock, it’s show time.

Making extra virgin olive oil isn’t complicated, but like many simple processes, it requires careful attention to detail, high-quality inputs, and the right equipment. The process can be summarized in six steps, which I’ll expand on later in the post:

And then, if you are a California producer, there is one additional step before you can label the olive oil “extra virgin”:  certification via your oversight agency, which includes laboratory testing and sensory panel testing (i.e., people tasting the product).

The processing team has invested in high technology (“laser scanning” is a term I remember) to pull out unacceptable olives (over-ripe, dried up, blemished). Olive oil experts sometimes liken extra virgin olive oil to “fruit juice,” and like a glass of fresh-pressed juice, you want to use only the best fruit — you wouldn’t put moldy or disintegrating oranges into your orange juice press. Similarly, the olive oil producer tries hard to reject defective olives. We got a close look at their bin of rejects, and some of the rejects had a lovely green hue, but a scratch or gouge was enough to exclude them from production, a testament to their high standards.

Grinding or Crushing the Olives

In the old days, a stone disk might have been used to crush the olives (and probably perform the next step, the mixing). These days, the tool of choice is a hammermill, in which hammers (more like dull blades) are mounted to a rotating shaft. A perforated disk is on the outside of the drum. As the material is crushed by the spinning hammers it is pressed through the grid.

The size of the grid is one of the important choices the plant operators need to make:  olives in each grove are slightly different, so some groves might require smaller or larger holes. The intern I mentioned in Part 1 plays a key role in this process:  the measurements of olive size, oil content, ripeness level, and other factors determine which grid to use in the hammermill.

Malaxing (or Kneading) the Olive Paste

Inside the olive, the oil is flavorless — it’s just a source of energy for the seed. The oil also has low levels of antioxidants and the other ‘good stuff’ that you see in health claims. The flavor and ‘good stuff,’ it turns out, are in the other parts of the olive, so by grinding and kneading the olive paste — mixing the oil with the flesh — olive oil gains its characteristic flavor (and the ‘good stuff’).

The malaxing step is “where art meets science,” as the kneading time and machine settings must be chosen for that day’s olives, the flavor profile of the brand, the machine’s characteristics, and many other factors. I imagine there is a “sweet spot” for each brand and harvest — too little mixing makes for a weak oil, too much brings out undesirable traits.

Separating the Liquids and Solids

The first separation machine (sometimes called a decanter) divides the liquids (oil and water) from the solids (pulp and pits). At Boundary Bend, they use a centrifuge with horizontal axis (in the foreground above). The liquids move onto the next stage of processing while the solids (commonly called “pomace”) are shunted to the waste area of the plant for other uses.

In some factories, pomace is processed with heat, solvents, and/or high pressure equipment to extract low-grade oil (“pomace oil”) which often must be heavily refined to remove their many undesirable characteristics. At Boundary Bend, they find that the pulp makes pretty good compost and that the pits can be sold for energy or steam production (“biomass-fueled cogeneration plants”).

(A side note:  I once spent a few days reading  articles and books about olive wastes and discovered a significant number of works, including the monumental Olive Processing Waste Management, a 500+ page technical review with over 1,000 citations. With millions of tons of “olive cake” and olive mill waste water produced each year, the problem of olive wastes attracts attention from governments, NGOs, and scientists. Most uses are pretty dull — burn, compost, gasify then burn — but now and then I ran across a more interesting application like the use of beneficial compounds from olive pulp to make rejuvenating skin creams.)

Separating the Olive Oil and Water

The final separation step splits the oil and the water. It’s another centrifuge that takes advantage of the different densities of oil and water:  rotation forces the denser water to the outside of the device, while lighter oil migrates toward the inside.   (I don’t know what happens to the waste water, but since this is a relatively new plant built in California, it’s a good assumption that it is treated in-house or by the municipal water system, or both.)

After the second separation, the oil is pumped to the storage area, where it is “racked.”  Unfortunately, we didn’t get to see this, but we saw some pictures in the introductory video. The racking occurs in tall stainless steel containers that have been purged with nitrogen to prevent the oil from oxidizing. Over time, sediment and water settle to the bottom, and product is drawn from points higher in the tank. This process may be repeated several times before bottling. Eventually, the oil is bottled for retail or wholesale sale.  Finally, if you are a California producer, there is one additional step before you can use “extra virgin” on the label:  certification via your oversight agency, which includes laboratory testing and sensory panel testing (i.e., people tasting the product).  The two key groups are the California Olive Oil Council (a trade association) and the Olive Oil Commission of California (a check-off program administered by the California Department of Food and Agriculture).

My visit to the olive oil processing facility was quite educational. It erased the Old World images, gave me a clear picture of the process, and revealed previously unknown steps (I had no idea that the olive paste needed to be mixed before final separation). I hope you also have a better understanding of how one of the world’s great products is produced.

As an Appendix, the simplified flowchart below shows the process and where the outputs (product or waste) appear.2 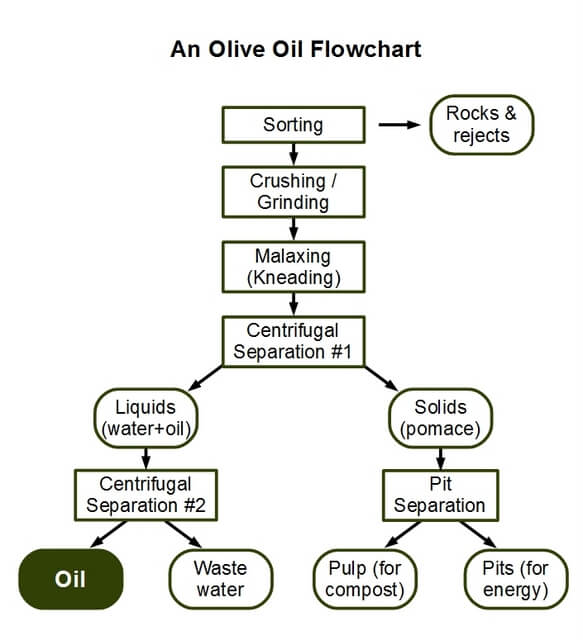 Other olive-related posts from IFBC attendees