Keeping an Open Mind about Insects and Other Sustainable Foods 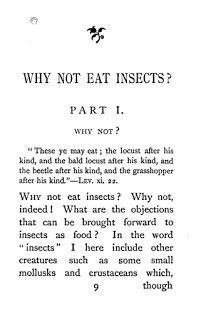 (Disclosure: I received a discount on the registration fee in exchange for writing three posts about my experiences at the conference.)

One night, the beef tongues in Chef Cesar Cienfuegos’ kitchen started speaking to him. They told him “There must be a better way, you need to start thinking differently.”

It was a special night in the University of California, Davis (UCD) dining halls — one of the nights when the kitchens prepare an unusual entree that is featured in every dining hall. That night it was beef tongue ramen, with Dining Services preparing enough so that 3,500 bowls could be ladled out across campus. It required over 200 tongues (about 650 pounds in total), a quantity that led Cienfuegos to think, that just “one night, one meal, one recipe” uses so much animal flesh, there must be alternatives.

This story launched a presentation by Cienfuegos and co-presenter Ben Thomas (from the Community Alliance with Family Farming, who also has worked with UCD Dining Services) at the International Food Blogger Conference (IFBC) entitled “Why Insects are the Next Super Food that will Save the Planet – A Chef’s Perspective”.

Although the headline topic was insects, Cienfuegos and Thomas wanted to explore a range of food sustainability ideas that included these four concepts:

Cienfuegos recalled a dish that put three of the above ideas into practice: an arepa made in part with grape flour (by product/waste), a nopales salad (an underutilized ingredient), and fried meal/wax worms (low impact).

Thinking that insects could be an interesting alternative food is one thing, but getting enough to serve in the dining halls is quite another. Cienfuegos started his search on campus with the entomology department. His contact had a few suggestions, and Cienfuegos followed some of the leads.  He called nearby bait shops in search of wax and meal worms, but they didn’t carry them (they are too finicky to stock), so they referred him to Rainbow Mealworms, California’s major grower. Surprisingly, their facility isn’t in the agricultural heartland or in a rural area, but in Compton, a city in the middle of the Los Angeles megaloplis (cue the Straight Outta Compton jokes…). On their website, Rainbow Mealworms sells a “Bug Burger” from Rephasy Superfoods, which I initially guessed was going to be an insect-fortified patty for human consumption. My guess was incorrect — the Bug Burger is “a complete diet for crickets, roaches, and other insects…Watch your insects run to it to eat.”

Near the end of the presentation, Cienfuegos and Thomas made two important points about the role of institutions like schools, hospitals, and corporate cafeterias: 1) their purchasing power can change the supply chain, 2) they can influence eaters.

Institutions have major purchasing power — UCD buys food by the truckload — and so when they ask for unconventional items from their distributors — like a pallet of cricket flour — the requests are noticed. There’s a better chance that the distributor will go searching for that special item when UCD is calling than when a single-location restaurant makes the same request. Or, when a big institution tells a manufacturer that they are switching to a different supplier for one reason or another, you can be sure that the switch will come up in sales team meetings with management and changes might be considered.

A recent example of institutional power is described in a piece at Civil Eats, which looks at a recently adopted food policy at the Los Angeles Unified School District (LAUSD), the Good Food Purchasing Policy, which is built on five pillars: local economies, environmental sustainability, fair labor practices, animal welfare, and healthy food. Because of the fair labor practices pillar, a major national chicken company with a poor record of employee treatment lost the bid to supply chicken. The local economies pillar has boosted purchases from small and medium-sized farms, including Shepard’s Grain, a wheat farm in Merced that will supply some of the LAUSD’s annual demand of 160,000 bushels of wheat for rolls and other baked goods for student lunches.

Considering the role of institutions influencing eaters, Cienfuegos recognizes that he has a chance to influence a
new generation of diners: with the special dishes like the above mentioned arepa, he can plant the idea that insects or other cutting-edge alternatives are part of the solution, and those who hear (or eat) his message might be more receptive when they hear about it again.

The presenters’ closing message was about the importance of keeping an open mind, or as Cienfuegos put it, “be the flexible one, be the artist.”

Right away, the audience had a chance to open their minds, as we each got an appropriate snack: a grasshopper tostada.  On top of a crisp tortilla, there was black bean puree flavored with leek and lemon ash (for color and flavor), an “almost” Mayan-style pickled onions (“almost” because they left out the habenero chile), a garlic flower, and dry roasted grasshoppers that had been tossed in flavored brown butter. There was a combination of nervousness and excitement in the room as the tostadas were brought to each table. After the talk, some of the attendees took a photo of themselves eating the tostada in front of a insect-themed background that the presenters set up and promptly posted their photos on Instagram, Facebook or another site.

I thought the tostada was delicious and not very buggy — the flavor and texture of the grasshopper was hidden by the other ingredients. Fortunately for the adventurous (like me that day), there was a bowl of extra buttered grasshoppers for people to sample. I tried a few and they had a nutty flavor, somewhat reminiscent of roasted soy nuts.

Image Credits
Page from Why Not Eat Insects?, by Vincent M. Holt, published by Field & Tuer, 1885. Downloaded from Google Books (public domain). Photo of grasshopper tostada by the author.