(Disclosure: this farm tour was a pre-conference excursion arranged by the International Food Bloggers Conference. Although I paid to go on the excursion, it is possible that California Endive or the California Pear Board provided some subsidies to reduce participants’ costs. In addition, I received a discount on the registration fee in exchange for writing three posts about my experiences at the conference.)

You might have spotted Belgian endive in your local supermarket and thought “yet another salad green, nothing special.” But you’d be wrong. Belgian endive is an amazing vegetable that requires significant agricultural ingenuity to grow.

I learned about Belgian endive on an excursion to California Endive Farms in Rio Vista, California, organized by the International Food Blogger Conference (IFBC). The bus ride from Sacramento to Rio Vista was enlivened by an engaging explanation of endive by Rich Collins, the founder of California Endive Farms (who provided the memorable quotes that make up the title and subheadings in this post).

Collins started with a pronunciation lesson: the plant we were going to see must be pronounced “ahn-deev.” The other pronunciation, “n-dive,” is used for field greens like curly endive and frisee, and it is important to keep them separate. A mnemonic that came to me today is to think “diva” when speaking of Belgian endive (“ahn-diva”):  it requires a lot of pampering, but in the end you get something great. The tour group took the pronunciation guide to heart, and for the rest of the conference anyone who referred to Belgian endive as “n-dive” was quickly corrected — including one of the speakers, who was demonstrating a recipe that involved placing a dollop of chicken salad onto an endive leaf and said “n-dive.”

In the mid-19th century, a Belgian farmer was drying some chicory roots in his cellar over the winter so he could roast them and use them as a coffee substitute. When spring brought warmer temperatures, he discovered that some of the roots had sprouted an ellipsoidal head of leaves. He tasted them, liked them, and realized that this process could be controlled. And so a new food product was created.  These days, there are numerous producers in Europe, but California Endive Farms is the only producer in the United States.

Growing endive is a little like growing mushrooms, but instead of starting with spores, you start with a root (to learn about mushroom farming, check out my post about a tour of Far West Fungi). Growing the root is the most ‘normal’ part of the process: farmers sow chicory seeds in the field (about 50 varieties are commercially available, California Endive grows 5-8 each year). Fortunately for endive farmers, chicory is a vigorous grower (Collins called it a weed, and noted that it grows all over the region), so it is not too difficult to produce the root.

After around 5 months, fields are filled with sturdy plants held in place by a mature root that is about the size of 12 ounce bottle of beer. The harvest crew digs up each root, cuts off the leaves (about 16-20″ in length), removes thin tendrils, and puts them into boxes. Around 40 million roots are produced per year in several fields.  The greens are left in the field to compost in place, or might be disked into the soil to speed the process.

At the California Endive facility, the root is trimmed again with more care (it is important to have just the right amount of green top on the root and have it be even) and then placed into cold storage, where the root hibernates at a temperature around freezing (our visit to the cold storage room was quite bracing after the 100 F heat of Rio Vista). The entire season’s harvest of roots are placed in cold storage and held until they are needed, thus allowing year-round production of the product so when the market needs endive, roots are ready to go.

The next step is mushroom-like. Roots are pulled from cold storage, placed in growing medium trays, and moved to a dark, cool, humid room where a flow of water and nutrients revives the root — darkness is necessary to create a “blanched” endive that is as pale as possible since green leaves are more bitter. One bud forms on each root and within about 3 weeks the endive is market-ready. It seems simple, but our tour guide was emphatic that the forcing room is “more of an art than a science” — getting the right temperature, water flow, nutritional composition, and so forth can be challenging.

When the buds have grown to market size, the forklifts roll in and carry the trays to the neighboring packing house, where the endives are removed from the roots and packed and shipped (two of the biggest customers are Trader Joe’s and Whole Foods).

On a normal packing day, the crew handles 25-30 tons of roots, creating a major waste stream. Looking at those chicory roots, one might think: “Why not sell them to New Orleans coffee companies like Cafe du Monde for their famous chicory-infused coffee?” A good idea, but it wouldn’t last long: with the current use of chicory in U.S. coffee, it would take less than one day for California Endive to meet the annual demand. So, like many other agricultural wastes (okara from tofu making, almond husks, etc.), they are sold as cattle feed (and someday might be part of a feed-blend for mini-livestock, i.e., insects?).

I made a flowchart that shows the process: 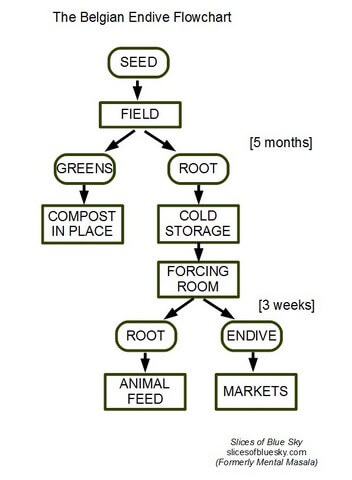 One of the quirks of Belgian endive is that it is not a “true endive” but is actually a chicory.  The true endives are escarole, frisee and curly endive (which is sometimes marketed as “chicory” or “curly chicory”).  In other words, vegetable names can be confusing.

Collins didn’t tell us why the word endive is used in the U.S. instead of chicory. I would guess that that the early importers borrowed the French name since French cooking had such massive influence in the late 1800s and early 1900s. The vegetable goes by many names around Europe, as Elizabeth Schneider details in her invaluable Vegetables from Amaranth to Zucchini: the British call it Belgian or Brussels chicory, French-speaking Belgians call it chicon, Flemish-speaking Belgians call it witloof (“white leaf”).  Wikipedia says that the Dutch also call it witloof and a German food glossary suggests that Germans call it Chicorée.

At lunch under a tree at the Stillwater Orchards pear farm near Courtland, we enjoyed two endive salads, allowing me to eat more than the American per capita average of 4 leaves per year1 via a “red, white, and blue salad” of red endive, white endive, blue cheese and pears (a similar recipe is on the California Endive blog), and a grilled endive salad (which reminded me a little of seared radicchio).

Schneider’s book has some clever quips about endive: “Happily, Belgian endive is far easier to cook, eat, and enjoy than to cultivate or refer to correctly in print,” and “whatever method [of cooking] you choose, Belgian endive is likely to respond kindly.” She follows these quips with tips on preparation, several pages of recipes, and a “Pros Propose” section with suggestions from professionals like Joyce Goldstein, Barbara Kafka, and Yamuna Devi.  You’ll also find plenty of recipes at megasites like Epicurious and NYT Cooking.

Other Posts about the Endive Tour From IFBC Attendees (and Press)