In Past Centuries, Ketchup Wasn’t All About Tomatoes 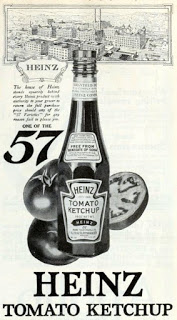 Would you believe that someone has written a serious academic book about the history of ketchup? Andrew F. Smith’s “Pure Ketchup” tells the story of ketchup’s evolution from a wide variety of sauces to the sweet, tangy tomato condiment that we know today. Smith, a professor of culinary history at the New School in New York, covers such topics as the early days, the evolution of ketchup from a home-made item to a mass-produced commodity, the consolidation of the industry, and product marketing.

It turns out that ketchup hasn’t always referred to a tomato-based sauce. Over the centuries, there have been thousands of published recipes for ketchup, with ingredient lists that include anchovies, apple, cockles, cucumber, grape or lemon. Smith provides quite a few of them in a 50 page appendix. The first known English language recipe is from 1727, in an edition of E. Smith’s Compleat Housewife; or the Accomplished Gentlewoman’s Companion. The main ingredients in the recipe are anchovies, white wine vinegar, two types of white wine, and a collection of flavorings (mace, ginger, cloves, peppers, nutmeg, lemon peel, horseradish).

The Origin of the Words Ketchup, Catsup, and Catchup

Before we get into tomatoes, let’s take a look at the word ketchup (or is it catsup? Or catchup?). The origin of the word is surrounded in mystery.

There is the European/Arabic theory, wherein it might be related to caveach, a French word that refers to a spiced vinegar pickling liquid used to preserve cooked fish. Or it might be a a cognate of escaveche, French for “food in sauce.” Or perhaps related to the Spanish or Portuguese words escabeche or escaveach, meaning “a marinade or sauce for pickling.” Fittingly, the words escabeche and caveach derive from the Arabic word iskebêy, referring to the process of pickling in vinegar.

And we have the Asian theory, which provides three possibilities. Two are found in Southeast Asia: the Javanese word kitjap and the Indonesian word kecap (also used in the closely-related Malay language, spelled kicap). I’ve seen references saying that kecap means “taste,” but these days seems to have morphed to mean soy sauce. The word appears today on soy sauce bottles in Indonesia and Malaysia, often with modifiers like asin (a salty soy sauce), manis (sweet and thick), lemak (slightly sweet) and cair (salty). Smith points out that the word ketchup was in use in Britain before they had colonized the Malay peninsula (1786), but since trade had been going on between Europe and the East for a long time, the word could have come via commerce instead of colonization. Smith follows the ketchup etymology trail to China, but finds little support for a Chinese origin of the word.

As for the ketchup / catsup divide, in another post, I created a Google Ngram that compares ketchup and catsup, and found that from 1890 to about 1960, catsup is more frequent used in books. In the 1970s, the two terms had nearly identical frequency. In about 1980, however, ketchup really took off and writers soured on the use of catsup.

The earliest published American recipe for tomato ketchup was published in 1812 by James Mease in a book called the “Archives of Useful Knowledge.” Smith includes the recipe in the book’s appendix. Here’s the recipe, with a few explanations added by me in square brackets:

Slice the apples [as in “love apples,” a name for tomatoes at the time] thin, and over every layer sprinkle a little salt; cover them, and let them lie twenty-four hours; then beat them well, and simmer them half an hour in a bell-metal kettle [bell-metal is a form of bronze]; then add mace & allspice. When cold, add two cloves of raw shallots cut small, and half a gill of brandy [1 gill = 4 fluid ounces = 118 mL] to each bottle, which must be corked tight, and kept in a cool place.

There are a number of omissions in this recipe that would make it a challenge to prepare, especially if you wanted to make the sauce shelf stable: how many tomatoes are used? how much salt? what size bottle? These questions are especially important because the salt and brandy act as preservatives.

The earliest known unpublished recipe is from a manuscript from about 1795 found in New York, but possibly containing pages that were added a decade or two later. Smith thinks that this recipe from “Mrs. Mitchell” was one of the later pages from the early 19th century.

I’ll end this post with my own story about ketchup. Many years ago I took some out of town visitors to Chez Panisse Cafe for dinner. I don’t remember much about the food (odds are that it was great), but I remember an unexpected request.

One of my companions ordered a steak. This being Chez Panisse Cafe, it wasn’t just any steak, but a steak with a backstory and provenance. After it was delivered, she asked the server, “Can I get some ketchup?” The server nearly fell over, took a second to recover, then politely responded, “I’m sorry Miss, we don’t have any ketchup in the restaurant. But if you’d like, I could check if we have any roasted tomato puree or tomato confit.” My guest said, no, don’t bother, and had her steak with the “official” Chez Panisse Cafe accompaniments (I don’t remember what these were).