Ketchup has Crushed Catsup Since 1980 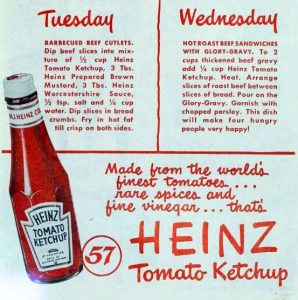 Preface: For various reasons, the images in this post (which are ’embeds’ from Google’s Ngram Viewer) might not going to look quite right — there will be spillover across the right boundary and spacing will be quirky. To see higher quality versions of the charts, click on the chart and it will appear all by itself.

Close readers of my last post on the word “tomato” on ketchup bottles might have noticed the use of both catsup and ketchup in official and commercial contexts: for example, a key federal regulation is called “catsup”, and early Heinz labels used both ketchup and catsup. Perhaps someday I’ll look for linguistic studies that explain the evolution and prominence of the two spellings, but for now I thought it would be fun to run the terms through the Ngram Viewer tool at Google Books to see how the frequency of occurrence in books has changed over time.

Let’s start with a simple comparison: catsup vs. ketchup in the complete Google Books library.  Between 1800 and 1890, the most popular spelling flips between the two. From 1890 to about 1960, catsup is more frequent. In the 1970s, the two terms have nearly identical frequency. In about 1980, however, ketchup really took off and writers soured on the use of catsup. Of course, a big caveat is needed: these charts are generated from books in the Google library, and I’m not exactly sure what that library contains. (Is it every book that can be purchased or downloaded from the Google Play store? Or only what can be seen in free books, snippet view books or books with preview? I haven’t found a clear description in the docs.) (Link to chart on the Google Ngram page)

Ngrams’ math tools provide a less noisy chart: the next figure shows the fraction of ketchup and catsup incidences that are ketchup (i.e., ketchup / (ketchup + catsup) ). Except for a few decades in the early 1800s, catsup is used more frequently than ketchup until the early 1970s, and there is a good bit of variation. From 1940 to the present the ketchup fraction has been rising, with the sharpest increases after 1980. (Link to chart on the Google Ngram page)

Finally, let’s take a side trip to the broader history of ketchup, decline of non-tomato varieties and the dominance of tomatoes as the primary ingredient. Before 1900, there were a sizable fraction of mushroom and walnut ketchup/catsup references, but eventually they dropped to a low level.  in the 20th century, tomato ketchup/catsup spike and become dominant.  Of course, in the 20th century and beyond, when an author writes ketchup or catsup without modification, it is probably assumed that the word refers to the tomato-based condiment.   (Link to chart on the Google Ngram page)

Detail of advertisement for Heinz tomato ketchup from the Ladies’ Home Journal, June 1948, in the Internet Archive Collection, via the Internet Book Archives’ collection on Flickr Commons.  No known copyright restrictions.