In my previous post about my first local meal of May, I promised to post the recipes to the three dishes I cooked. Here they are: 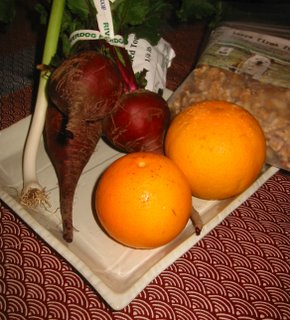 Method
Wash and peel the beets, then dice into 1 cm cubes. Place in a steamer basket over water in a small saucepan, cover, and steam until tender. An alternative method is to wash the beets, pierce the skin with a knife in a few places, place in a roasting pan, cover with foil, and bake at 400 F for 30 or 40 minutes, until the beets are tender.

Using a sharp serrated knife, cut the peel off of two oranges, slicing just past the outer skin of the segments. If the orange has tender inner membranes, chop it into cubes about the same size as the beet pieces. If the membrane is tough, slice the fruit from between the membranes and cut into pieces.

Toast the walnuts, and chop into rough pieces.

Make the dressing. Remove some pieces of zest from the third orange, and then juice it. Chop the zest into tiny pieces. Mix some of the orange juice (a few tablespoons), diced orange zest (a teaspoon), balsamic vinegar (a tablespoon), olive oil (4 or 5 tablespoons), chopped green garlic (a teaspoon), and salt (1/2 teaspoon or more).

Just before serving (and after the beets have cooled), combine the beets, walnuts, orange pieces and dressing. 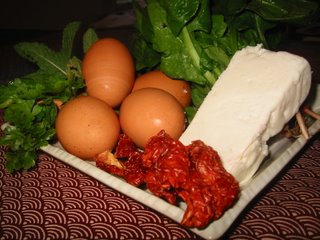 Method
Bring about two cups of water to a boil, turn off the heat, and add the sun-dried tomatoes. Let them rehydrate for about 10 minutes then remove. When cool enough to handle, cut the tomato into small pieces.

Carefully wash the spinach to remove any sand clinging to the leaves or stems. Remove the tough stems. Heat some oil in a medium-sized skillet at medium heat, add the garlic, cook for 30 seconds, then add the spinach leaves. Cook for a few minutes until wilted. Turn off the heat, then set the pan on a slope and move the cooked spinach and garlic to the upper side, allowing the liquid to drain to the lower side. When cool, chop the spinach to your liking.

Turn on the broiler in your oven (you will be cooking the top of the frittata under the broiler).

Heat some oil or butter in a large oven-safe skillet that will fill under your broiler over a burner at medium heat. Pour in the egg-cheese-vegetable mixture and gently spread it into an even layer. Cook for a few minutes until the bottom is golden brown and the top of the frittata has started to set. Then set the skillet under the broiler and broil until the top is golden brown. Carefully remove (don’t forget that the handle of the skillet might be quite hot!) and serve. 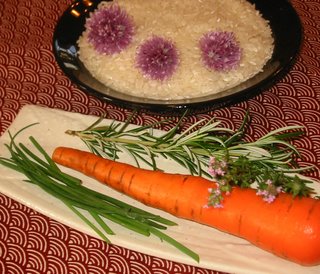 Method
Combine the rice, diced carrot, salt and water in a pot. Cook the rice as directed, placing the rosemary and thyme in the pot after about 10 minutes to infuse the rice with their essence. After the rice is done, remove the herbs, and gently mix in the chopped chives.