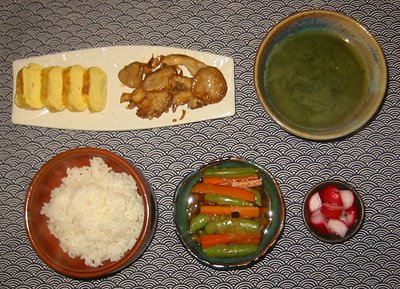 Inspiration from Afar
For my second meal of the May 2006 Eat Local Challenge, I took a culinary trip to Japan. It might at first seem strange to go so far during a local challenge, but Japan has a compatible food philosophy, with the foundations including seasonality and simplicity. The non-locality of soybeans–and consequently tofu–creates a large protein gap which can be filled by eggs (an aside about the locality of soy: most soy is produced in the midwestern United States, but how much tofu is made there? I would guess that a tiny fraction of U.S. tofu is made near the farms where the soybeans are grown, for cultural and economic reasons.)

The meal was inspired by Elizabeth Andoh’s cookbook Washoku, which presents a comprehensive kitchen philosophy along with many recipes. In an interview in the SF Chronicle, Elizabeth Andoh explained washoku:

Washoku is based on five principles: five colors, five tastes, five ways of cooking, five senses, and five outlooks (e.g., respect the efforts of those who grow, deliver and cook our food). By striving to include the five groups of five in your meals, harmony, balance and healthfulness can be achieved. For a complete description of the five principles, visit Jennifer Maiser’s 2006 post about a dinner in San Francisco honoring Elizabeth Andoh’s Washoku book at KQED Food.

The Meal
My meal consisted of the following dishes (ingredient sources are mapped and listed at the bottom of the post):

I thoroughly enjoyed everything, especially the oyster mushrooms and simmered vegetables. And how did I do on the five washoku principles?

All in all, it was a good start to learning a new cooking philosophy. 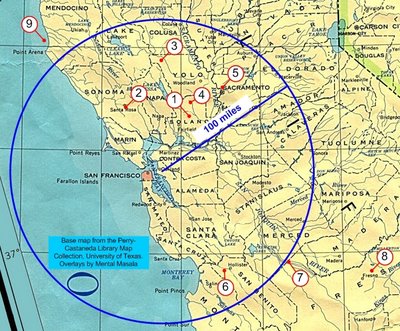 For this meal I had to go significantly outside of my circle for two flavoring ingredients: kombu seaweed and ginger. They probably comprised less than 1% of the total weight of the meal.

Final Notes
The non-locality of tofu and miso — two of the soybean-based foundations of Japanese cooking — create a large gap in the Northern California local pantry. The protein gap can be filled by eggs, but the flavors and textures provided by miso and tofu are irreplaceable. Miso, in particular, is a very distinctive product with uses in soups, sauces, and stews. Most soybeans are grown in the midwestern United States, but how much tofu is made there? I would guess not much. It is possible that not much tofu is made near soybean farms for cultural (Midwesterners aren’t big fans of tofu) and economic reasons (shipping perishable blocks that are 50% water is expensive). The tofu I usually buy in the grocery store is made in Sacramento, San Jose or San Francisco using dried Midwestern soybeans.