Caffeine in Your Cup of Tea: Loose Versus Bagged

Let’s face it: a cup of tea can taste great and be a relaxing ritual, but the caffeine might be the biggest attraction. And if you want to get the most (or least) in your cup, scientific articles can be a valuable resource. In particular, some of the papers by a group from the University of Natal in South Africa have results that are useful to the everyday tea drinker, not just to fellow scientists (I reviewed one about the effect of water temperature on caffeine levels in brewed tea). 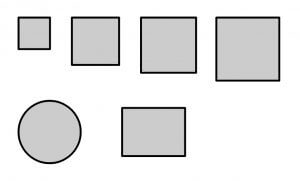 In part three of the series (full reference below), the focus is on size and shape, with seven configurations considered:

To the right, you’ll find scale drawings of the tea bags.

The tea was a black tea (Ceylon Orange Pekoe) that had been sieved so that pieces were between 1.4 and 2 mm in size. They don’t specify the quantity of tea (how did the reviewers let this happen?), a reference to a previous paper indicates that they use 4 grams of tea. They brewed the tea in a specially constructed brewing rig that maintained a constant temperature (80 C +/- 0.1 C).  Periodically, samples were extracted and analyzed for caffeine concentration.

The researchers’ goal was measurement of things like “rate constants,” but what I’m interested in is the caffeine evolution, i.e., caffeine level versus time. Fortunately, they included an equation* that converts from their interest to my interest.

For the Most Caffeine in Your Tea, Stay Loose

The Tableau Public story below shows the most useful results (you can also view the tea and caffeine story on my account at Tableau Public).

The first chart in the story compares loose tea with four square bags.  One result is dramatically clear: bagging your tea blocks caffeine release. While loose leaves can move around in the hot water to release their flavor and caffeine, leaves enclosed in a bag are limited in contact with water. While this may seem obvious, the research shows how much more:  at 2 minutes, loose tea has 70% more caffeine; at 3 minutes, 60% more; and at 4 minutes, 50% more.  The difference in caffeine for the 36, 49 and 64 cm2 bags is relatively small.

One way you could use the charts is to convert between loose and bagged tea. Let’s say you want to get the 3 minute loose leaf caffeine level (2.2 mmol/dm3), but you only have square tea bags. With a 16 sq. cm bag, you would need to brew for 7 minutes; with the 36, 49, and 64 sq. cm bags, a bit more than 5 minutes.  (Actually, you would need more time because the water is cooling and the caffeine infusion rate decreases as temperature decreases.)

The second chart in the story shows the three 49 cm2 bags, round, rectangular and square. For these three shapes, there is no difference.

One variable I haven’t seen in the authors’ extensive collection of papers is the effect of tea leaf size inside of a tea bag. The papers were written in the early 2000s, which I think was a few years before companies like Mighty Leaf introduced their full leaf tea pouches, so perhaps they weren’t thinking about it.  And so I wonder:  how does the size of the tea particles inside of a tea pouch affect caffeine and flavor?  I expect that it would make a difference, but how much?

Note
The concentration of caffeine at any time can be expressed as ln [ c∞ / (c∞ – c) ] = k t + a, where c is the current caffeine concentration, c∞ is the caffeine concentration at equilibrium, t is time, k is the rate constant, and a is the intercept. In the paper described above, k and a were determined using linear regression of the experimental data. I rewrote the equation into the form of c = f(t), thus allowing me to generate the curves in the charts.