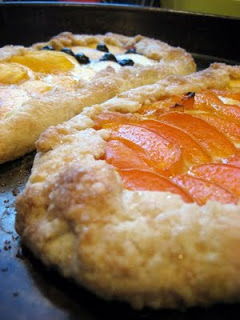 After a few posts on creepy-crawlies, it’s time to give my readers something more universally appreciated: pie. This situation reminds me of something in Paul Bertolli’s Chez Panisse Cooking. The restaurant (a.k.a. “downstairs”) at Berkeley’s Chez Panisse has a prix fixe menu, so your dining fate is out of your control. Bertolli writes that whenever the menu would contain a main course with offal (organ meats), he made it a point to always have the dessert be something comforting and familiar like chocolate cake.

Over the course of the summer, I baked quite a few fruit galettes. The amazing fruit at the market was certainly an inspiration — brilliant orange apricots, gone as fast as a shooting star; the weeks of sunny peaches, a new variety each week. But as important was that I finally found all of the pieces I needed to consistently bake a great galette (my two-crust pies, however, still need a lot of work).

The original inspiration for fruit galettes came many years ago, in a New York Times review of Rose Levy Beranbaum’s epic Pie and Pastry Bible.  Like many cookbook reviews, this one included a recipe:  an apple galette with a crust that contained a bit of apple cider vinegar and a combination of cream cheese and butter for the fat. The vinegar helps makes the crust more tender (by relaxing the gluten), while cream cheese provides a pleasant tang.

The recipe also contained an important technique for getting a crispy crust: bake the galette in a steel pan set on a pizza stone. The intense and continuous heat from the pre-heated stone will cause the bottom crust to cook before the fruit above can soften it. I use a heavy deep-dish pizza pan from Chicago Metallic and bought unglazed quarry tiles from Home Depot as an inexpensive substitute for a commercial pizza stone (the six tiles were $1.49 each, I think). 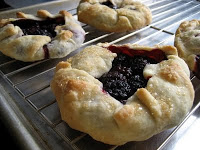 Although Beranbaum’s crust could certainly be used for an apricot galette, a “foolproof” pie crust posted at Serious Eats from the Cook’s Illustrated team caught my attention because it had a quirky variation that appealed to my scientific side: vodka replaces some of the water in the dough. The has two benefits. First, alcohol does not encourage gluten formation, thus avoiding one of the causes of tough dough. Second, alcohol has a lower boiling point than water, and so it evaporates more quickly during baking, leading to a flakier crust. Although the recipe calls for shortening, I replace it with an equivalent volume of leaf lard (Leaf lard is the classic pie fat, and is probably even healthier than trans-fat laden shortening.).

The final piece in my pie puzzle was the pastry cream. This item — a thick custard made from milk, egg yolks, sugar, a vanilla bean and flour — provides a layer of richness between the fruit and the crust. And it seems to also act as a ‘sogginess barrier’ between the crust and the fruit, improving the quality of the crust. I’ve been using the pastry cream recipe in Chez Panisse Desserts by Lindsey R Shere, but you can find a recipe in most dessert cookbooks and many other cookbooks with tart recipes.

With all of these elements gathered throughout the years — Beranbaum’s baking technique, Cook’s Illustrated’s pie crust, Lindsey Shere’s pastry cream, and fabulous seasonal fruit, of course — the fruit galette has become one of my ‘go to’ desserts. Now, with summer’s fruit at an end, I look forward to trying new flavors during the winter. Lemon curd, apple-quince, and who knows what else…