These line drawings aren’t some kind of code or ancient writing, they represent spider webs that have been  in my backyard in recent days. The circle represents the web and the radiating lines represent the support structures.  At the center of the circle is a dot that represents the 1-cm diameter spider (probably a cross spider, Araneus Diadematus), but because the web and its supports are so large, the dot is vanishingly small.

The right-hand figure shows a 25-cm diameter web supported by a 300 cm (~10 ft) line on the side, a 250 cm (~8.2 ft) line to the ground, and multiple short pieces on the left. In other words, the spider is about 250 body lengths above the ground. To put it in human terms, it would be like a 1.82 m (6 ft) person perched on a very fine net that was 455 m (1,500 ft) above the ground. It’s somewhat like Philippe Petit’s wire-walk between the two towers of the unfinished World Trade Center towers in 1974, which was just over 400 m (1,300 ft) tall. His walk — and the complicated preparations that it required — were vertiginously and beautifully documented in Man on Wire (and also in a book of the same name). 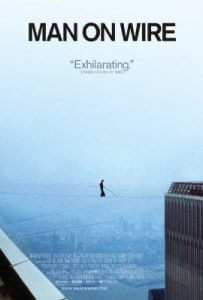 To return to spider terms, they probably don’t get vertigo and don’t realize how far they are from the ground or nearby objects. From what I’ve seen and read, web-building spiders are creatures of vibration and the near-field:  they respond to things hitting their web and what’s very close-by. So hanging out a few hundred body-lengths from a solid object is no big deal… 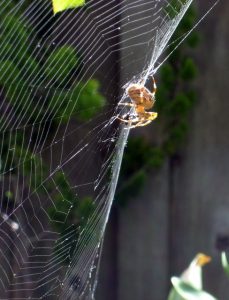 How can something so small create a web that spans such a huge distance? It works something like this: while perched on an object above ground, the spider lets a long piece of silk be carried by the wind until it catches on something (like a nearby tree). Next, the spider pulls the line tight (and might even traverse the line while laying another line to increase the strength of the upper support). It then outside support by walking back across the line while time dropping a line of silk below the main line to make a rotated D-shape (with the straight side on top). Next, it crawls down the loose piece until it reaches the middle, then it drops down to the nearest object and pulls the line tight to turn that D into a Y. Thus, the basic frame of the web is made. From that point, it is a matter of placing radial lines, then laying the spiral. Howstuffworks has a series of illustrations that demonstration how a spider weaves an orb web.

For more about spiders, check out David Attenborough’s “Life in the Undergrowth.” It’s filled with amazing footage and stories from the world of insects, arachnids, slugs and other invertebrates.

The Man on Wire image is from Wikipedia, which claims that this particular image is covered under the Fair Use provision of copyright law. The photo and line drawing are by the author.