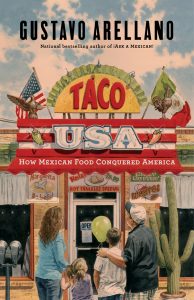 Mexican food is hugely popular in the United States — salsa has been outselling ketchup for years, some of the fastest growing restaurant chains sell Mexican food, the taco truck craze is at its peak — but it took a many years and many innovators for this to happen. Gustavo Arellano’s Taco USA: How Mexican Food Conquered America (2012, Scribner) is an ambitious and entertaining book that reviews the history of America’s love of Mexican food using profiles of business people, restaurateurs, cooks, and more.

My introduction to Gustavo Arellano was on KCRW’s Good Food program, where he is a semi-regular commentator on dining in Orange County (he is currently the editor of the Orange County Weekly).  In addition to his OC recommendations, he occasionally visits to muse on topics like the famous Taco Bowl that #45 ate in his tower or cultural appropriation.

When I heard that he had a book about the history of Mexican food in the U.S. (I heard on KCRW’s Good Food, of course), I immediately added it to my “to read” list. And I’m glad I did, because Taco USA is fascinating look how cultures can come together over food. (Taco USA also led to two blog posts about some Mexican food history: early patents for taco shell frying machines and possibly the first English-language recipe for tacos.)

Arellano begins his history with deep background:  an appreciation of the culinary gifts that Mexico (i.e., the cultures of Meso-America) gave the world, most famously vanilla, chocolate, and corn. As I read this introductory chapter, I was a little bit nervous about my decision to pick up the book: the writer was trying too hard to be clever with snappy phrases. Fortunately, my fears were misplaced, and Arellano dialed back his writing for the remaining chapters, while maintaining a good dose of wit to keep it light (he has a great sense of humor).

Taco USA has 12 topical chapters in the book that focus on single topics like tacos, Tex Mex cuisine, tequila, burritos, or Mexican grocery stores. They are ordered somewhat chronologically — i.e., tacos come before burritos because they made their big commercial splash first. To whet you appetite for knowledge, Arellano uses questions to title the chapter, like “Is Tex-Mex Food Doomed?,” or “Whatever Happened to Southwestern Cuisine?”

Gustavo Arellano’s focuses less on the food than on the people who have tried to meet the USA’s demand for Mexican food: innovators and business titans like Glen Bell, Larry Cano, William Gebhardt, Pedro W. Guerrero, Bertha Haffner-Ginger, Mariano Martinez, Roberto Robledo, and Jose Luis Saavedra.* His short biographies are simultaneously the book’s biggest strength and weakness: their stories can be fascinating — for example, how Larry Cano’s El Torito chain helped bring sit-down Mexican dinners to a much wider audience, or how Mariano Martinez worked tirelessly to invent the frozen margarita machine — but at the same time, corporate histories can be confusing (so many names!).

Another prominent theme in Taco USA is evolution. Arellano gives the term “Mexican food” a lot of room:

But those who dismiss Taco Bell, the taco pizza, even a church enchilada booth as somehow not Mexican because Mexicans aren’t the main consumers or creators miss an imperative point. We must consider the infinite varieties of Mexican food in the United States as part of the Mexican family — not a fraud, not a lesser sibling, but an equal…Wherever there is something even minutely Mexican, whether it’s people, food, language, or rituals, even centuries removed from the original mestizo source, it remains Mexican.

Anglos are a key part of the story, as they have been the ones with the capital to build businesses, or who could be ambassadors to the Anglo community (e.g., Glen Bell with his taco selling innovations):

[Chili con carne] was a Mexican dish, made by Mexicans for Mexicans, but it was whites who made the dish a national sensation, who pushed it far beyond its ancestral lands, who adapted it to their tastes, who created companies for large-scale production, and who ultimately became its largest consumer to the point that the only thing Mexican about it was the mongrelized Spanish in its name. The Mexicans, meanwhile, shrugged their shoulders and continued cooking and eating their own foods, all the while ostracized by Anglos who nevertheless tore through whatever Mexicans put in front of them.

In an interesting but ultimately disappointing chapter, Gustavo Arellano takes aim at one of the places where Anglos have had near exclusive dominance: cookbooks and television. The most famous authors and presenters — like Diana Kennedy, Rick Bayless, Susan Feniger and Mary-Sue Millikin — aren’t of Hispanic origin, and until recently it was hard to find top selling / top viewed projects (recently there have been some changes, like Pati’s Mexican Table on PBS, Daisy Martinez on the Food Network). In my view, Gustavo Arellano doesn’t explain the Anglos’ success, but my guess is that the “system is wired for them,” i.e., the media and publishing worlds are run by native English speakers and Anglos are the key demographics for food TV.

Gustavo Arellano’s fascinating book ends with a list of his 5 favorite Mexican dishes in the U.S.A.** His appreciation of Mexican food’s evolutionary potential is apparent in his choices — several would be considered “unauthentic” by food purists — and that’s one of the things I appreciate about Gustavo Arellano: he realizes that Mexican food is not a static thing. It changes because of cultural factors, supply of ingredients, immigration patterns, and economic forces. We can be sure that Mexican food in the USA will continue to evolve through new culinary mashups (perhaps the Nordic taco?) or modern modifications of classics, all of which will reflect our complicated, ever-changing society.

5. The Night Hawk Special, El Rancho Grande, Tulsa, Oklahoma: “ostensibly two cheese enchiladas topped with processed cheese, then smothered in chili con carne on one half, and a soft cheese taco slathered in chili con queso on the other.”
4. Sonora Dog, El Guero Canelo, Tuscon, Arizona:  A bacon-wrapped hot dog served in a bolillo roll, topped with beans, tomatoes, mayo, green salsa, and mustard. A condiment bar offers additional customization that “make[s] the Mission burrito seem as Byzantine as a glass of water.”
3. Taco Acorazado, Alebrije’s Grill, Santa Ana, California: A tortilla topped with rice, a milanesa cutlet, avocado, pickled carrots, queso cotija, plus your customization with salsa and etc.
2. Rolled Tacos, Chico’s Tacos, El Paso, Texas: tightly rolled taquitos filled with ground beef, served with a thin salsa that is more like a soup
1. Mexican Hamburger, Grandma’s the Original Chubby’s, Denver, Colorado: A burrito filled with beans, chicharonnes, a hamburger patty, and topped with a chile sauce (he isn’t specific about this sauce, calling it a “gravy.” Is it red or green?).