…and I’ll Take the Instant Noodles for My Entree 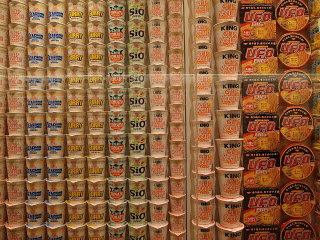 A few weeks ago, the informative and nicely-varied radio show Good Food (produced by KCRW, Santa Monica; available for streaming and podcasting), had an interview with Toni Patrick, the author of 101 Things to Do with Ramen Noodles. For example, how to use Ramen as a foundation for more interesting dishes like Summer Picnic Salad, Ramen Fajitas, Beef Sukiyaki Ramen, Trail Mix, and 97 other recipes.

The variety of instant noodles available is astounding. You will find both wheat-flour and rice-flour varieties at most supermarkets, with flavours created to appeal to local palates. But the wackiest hawker dish around must be Maggi mee goreng — instant noodles (Maggi is the preferred brand) softened in boiling water before being fried just like Indian mee goreng* and topped with an egg fried sunny-side-up. You’ll find this dish at Indian stalls at suppertime. It has become so popular that there are even instant noodles packaged with mee goreng flavour sachets.

When I visited Malaysia I did not have a chance to try Maggi mee (my “must try” list was very long, and Maggi mee was pretty far down the list). But I remember seeing some of the prep work in the open kitchen of Devi’s Corner in the Bangsar section of Kuala Lumpur. While eating a hectic dinner of idli and other South Indian food, I watched a restaurant worker dumping package after package of instant noodles into a large plastic tub for later use. I’m surprised that Maggi doesn’t sell a two kilo “restaurant pack”. Perhaps the noodles age most ideally and reach their peak when stored in the single-serving container?

But I might get a chance to invent my own version. Without knowing exactly what they were, I impulsively bought some Air Dried Broad Noodles (mi kering kasar) from the local Thai market. It turns out that they are the healthy version of instant noodles. I guess that explains the low, low price…

Or, I could adapt my recipe for Wok-fried Rice Noodles to use instant noodles.