Readers of Mental Masala know that I am an advocate of eating locally. The story I’m about to share with you, however, shows that it is possible to go a bit too far.

Almost all refined sugar in the United States is made from sugar beets or sugarcane (about 60% from beets, 40% from sugarcane), with California contributing a small amount. Sugar beets are grown primarily in northern states (about 50% of the U.S. beet sugar production is from Minnesota and North Dakota. California contributes just 6%.). Sugarcane is grown in southern states and Hawaii (50% of the U.S. cane sugar is from Florida, 37% from Louisiana). (source: USDA Sugar and Sweeteners Briefing Room).

The main sweeteners produced in Northern California are fruit juice and honey. Fruit is everywhere this time of year, and local beekeepers sell their honey at the farmers’ markets and various retail outlets (Berkeley Bowl has at least 5 honey types from local suppliers). 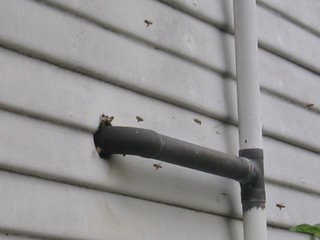 A Very Local Source of Sweetener
About 2 weeks ago, while preparing dinner after work, I noticed a few honeybees in the bay window above my kitchen sink. That’s odd, I thought, I’ve never seen a honeybee in my apartment. I looked around, starting under the sink. There were a few bees down there too, and I spotted a ring of light around the sink’s drainpipe. It was a gap between the drain pipe and walls that led all the way outside. A hive had started forming in the space between the outside wall and the back wall of my kitchen cupboards! How did they get there?

Swarming
When the bee colony grows too large for its hive, the hive’s current queen and a few thousand worker bees fly away in a swarm (the next queen has not emerged yet). They seek temporary shelter (in a tree, for example), while scout bees fly around looking for a suitable home (a protected space with a volume of 20-40 liters). When the scouts find one, they tell the queen, and the swarm moves to its new place. The workers prepare the walls, and start to build honeycomb.

Convincing the Bees to Move
I like honeybees, but the kitchen wallspace is not a suitable place for a beehive, so they need to be moved out. Somehow the queen needs to be ‘convinced’ that a new home is needed. One way is to build a device that allows bees to leave, but not return. In theory, the worker bees will all depart, leaving the queen alone and hungry. When she gets tired of waiting for her food, she too would leave the hive, join the rest of the bees, and start looking for a new home.

We arranged for a bee expert to cover the hive entrance with a piece of wire screen that had been bent into a Frank Gehry-esque shape (shown below). As each bee left the hive in my wall, went through the screen maze, and later discovered that there was no way back in, she would gather together with her hive-mates in a swarm near the hive entrance. The photo below shows the bees about 1 hour after the screen was installed. Note the space between the bees and the wall—they are clinging to each other, not to the wall. 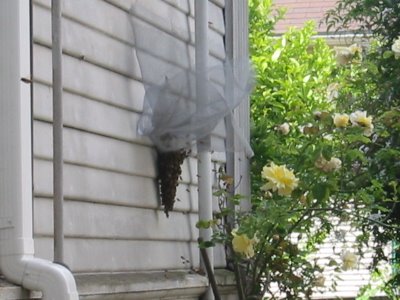 The swarm kept growing, and after a few more days it was about the size of large loaf of bread. At night and in the early morning, the bees are nearly motionless, waiting for the air to warm up. By late morning, they are very active, flying off to local nectar sources (One web page says that a bee can travel as much as three and one-half miles in a single flight, the equivalent of a five-foot tall human going 375 miles.) . Fortunately, they are quite calm, and I can stand within a few feet without worry of being attacked. 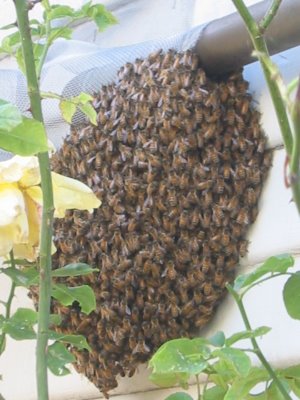 Although the formation of a swarm was a promising start to the hive’s relocation, there has been a major change in the last few days: new honeycomb on the outside of the house. The photo below shows the new comb through a gap in the bee swarm. I’m no expert in bee behavior, but would guess that the bees are planning on staying. We’ll see… 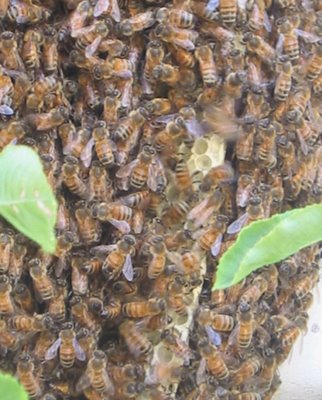 There are many websites about bees. Here are a few good ones I found: