My recent post on the superfood called moringa got me wondering: has the term “superfood” been used for a long time? Or is it a recent thing? I went to the Google Ngram Viewer to get an answer. Ngram Viewer displays the frequency of use for a word or phrase in Google’s massive collection of digitized materials, and therefore gives a rough sense of the term’s popularity over time. You can look at one term, compare multiple terms, combine terms, and more — it is quite amazing. I had some fun comparing ketchup and catsup a while back, finding that ketchup has crushed catsup since 1980.

I went to the Ngram Viewer, typed a broad search term  (“superfood + superfoods + Superfood + Superfoods”) and set the boundaries to 1900 and 2010. Here is the result:

Interestingly, three out of the four items use the term superfood to refer to something highly processed, like a powdered drink mix or a loaf of bread. This is contrary to today’s usage, where superfood is used to refer to the ingredient, not the final processed food.  In other words, that snack bar is extra healthy because it contains foods that have the superfood label.

Here are the four examples from my Hathi Trust search: 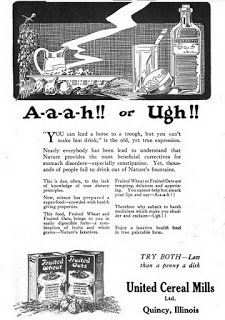 An advertisement for “Fruited Wheat and Fruited Oats” from United Cereal Mills, Ltd. in Sunset: The Pacific Monthly (April 1920) headlined “A-a-a-h!! or Ugh!!” said “Now, science has prepared a super-food — crowded with health giving properties.” (note: this Sunset Monthly is the forerunner of today’s Sunset: Your Guide to Living in the West).

American Poultry Advocate (June 1922), has an editorial called “Egg a Superfood” which notes that “[w]hen the food value of the egg is fully understood the demand will exceed the supply. Teach, preach, and advertise a larger use of eggs.” Eggs have probably been called superfoods for centuries (how do you say superfood in Latin or ancient Greek?).

A journal called Maternity and Child Welfare (volume 4, 1920) has an advertisement for Ovaltine Tonic Food Beverage, which claims that Ovaltine is a “super food beverage, a strength giver, and a stimulant.” (See image below.)

Finally, a long piece in McClure’s Magazine (volume 1, May-October 1925) titled “The Public Responsibility of the Baker of Bread,” has a lot to say about bread making and at one point describes a project “to make the loaf of bread into a superfood for maintenance, growth and health equal to a complete normal diet.” There’s little chance of any loaf of bread being called a superfood today. 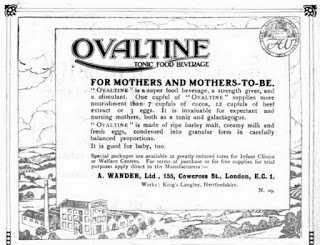 How many different foods have been called superfoods? One hundred?  Two hundred?  Has anyone ever put together a comprehensive list? Or how about an infographic that shows the addition and deletion of foods from the pantheon of superfoods? I expect that such a project would take a lot of library and internet work.

David Sax’s Tastemakers: Why We’re Crazy for Cupcakes But Fed Up with Fondue, has an interesting chapter on the recent history of superfoods, with special focus on chia seeds, pomegranate and Dr. Oz. (Sax also wrote a book called Save the Deli that opened up a rich discussion about the evolution of Jewish delis, including a segment on KCRW’s Good Food and a discussion in Berkeley that I covered for the Ethicurean: Saul’s got SOLE: The Jewish deli in Berkeley evolves)

If I could read German, I would love to read this dissertation by Mara Hiller prepared for Albstadt-Sigmaringen University called On the Trend of “Superfoods”: the Example of Chia Seeds and Ginger (via Google Translate, original title: Zum Trend der “Superfoods”: am Beispiel von Chia Samen und Ingwer).

Another dissertation I found in Worldcat also looks interesting:  Magic foods: Rituals, Medicine, and the Modern Diet, by Sarah M. Jung, an M.S. thesis written at CSU Los Angeles in 2013. According to the abstract, Ms. Jung looks at more than a dozen edible plants with “recorded ceremonial use” to find connections between ancient cultural practices and modern functional foods (her list includes several of my Unusual Greens: moringa, purslane, and lamb’s quarters).

Random link from the archive:  A Pickle’s Comeback