Faster than a Speeding Broccoli — “Superfood” in Book Titles

The Superfood Google Ngram was interesting, but I still had a superfood itch that I needed to scratch: what about superfood in book titles? The University of California’s Melvyl tool (part of Worldcat) was my tool of choice and I searched for superfood* in book titles (the * to cover superfood and superfoods). The catalog contained more than 600 records 1 — too many to easily analyze, but fortunately the left column of the results page listed the number of books from each year, so a chart was a natural next step. 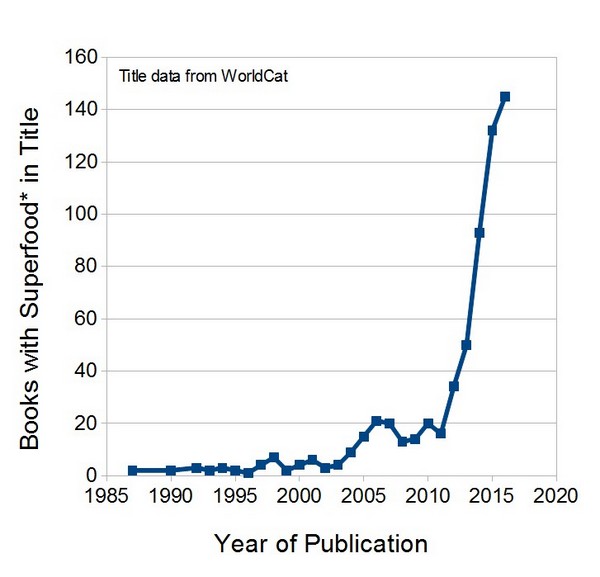 The basic shape is similar to the Ngram — most of the activity is in the last few years. The number of book titles, however, is zero in the 1970s (the oldest books were from 1987 2, whereas Ngrams had many hits from the 1970s. The Ngram search looks in the contents of the books, and so those 1970s hits could have been a one or two time mention. To put the word superfood in the title is a much larger commitment, and my guess is that the idea of superfoods was incubating in the 1970s, but not until the 2000s did it become an big enough idea to include on a book title.

Superfoods as a Marketing Device

David Sax’s Tastemakers: Why We’re Crazy for Cupcakes But Fed Up with Fondue, has a chapter about superfoods that includes this pointed statement from NYU professor and author Marion Nestle:

“It’s a marketing device,” Marion Nestle told me in an e-mail when I asked her about superfoods. “Nutritionists like me don’t recognize any one food as especially super. All unprocessed foods contain a huge range of nutrients but in varying proportions. That’s why healthful diets are supposed to contain a range of foods with complementary nutrient contents. The ‘super’ designation usually depends on one nutrient or a category of nutrients (antioxidants are a good example). All fruits and vegetables contain antioxidants, so by that standard all are superfoods. This is about marketing, not health.”

At her blog Food Politics, Professor Nestle has been tracking industry-funded nutritional research to see how often the results agree with the sponsor’s goals (spoiler: almost always). I searched her site for “superfood” and found a post about pear-industry-sponsored research on the health effects of pears. Nestle writes:

The makers of processed foods and drinks spend fortunes marketing their foods in this environment.  Now producers of fruits and vegetables feel that they too need to compete.  They form trade associations to do this for them and to pay for research they can use to market their products as “superfoods.”

Meet, for example, the Pear Bureau Northwest, which pays for research and sends press releases about its only-to-be-expected positive results, in this case “New Research Indicates Regular Fresh Pear Consumption May Improve Blood Pressure in Middle-Aged Men and Women with Metabolic Syndrome” (my emphasis).

I like pears.  They are delicious when ripe.  But superfoods?  Really?