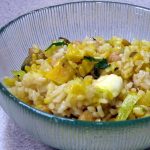 Several times in the last few weeks, brown rice from Massa Organics has been the base for main dishes. I mix rice, cooked vegetables, cheese, herbs, and other flavorings, and serve it hot with a salad or other side dishes.

The first one was inspired by Heidi Swanson’s 101 Cookbooks website and Super Natural Cooking (a great cookbook, by the way). The dish has a somewhat Middle Eastern sensibility, with mint, thyme and feta providing strong notes on top of a subtle background of beets, rice and chickpeas (and it also had some subtle beauty, as the pigment from the golden beets bled into the rice, giving it a yellow hue).

Here’s how I made it:

Except for the chickpeas, everything came from the Berkeley farmers market, so this was a nearly completely local main dish.

My next rice dish was basic and hearty: sauteed onion, sauteed mushrooms, cheese curds (from Spring Hill Dairy), wilted spinach and cooked bacon. Simple and tasty, but missing something (perhaps I should try again during tomato season).

My most recent attempt was a riff on the picadillo I made for chiles en nogada eighteen months ago.  It has  complex flavors, with spices, sweet fruit, and rich cheese curd.  I used these ingredients:

It was definitely a winner.  Alongside a bowl of beans and some braised greens, an excellent and relatively simple-to-prepare meal.

More on Brown Rice
The San Francisco Chronicle had a few articles about brown rice in last Sunday’s food section (it still feels weird to type ‘Sunday food section’ after so many years of Wednesday food sections).