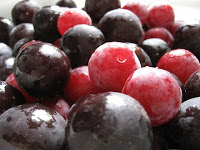 A family of ravenous house finches nesting on a nearby building and quirky weather in Berkeley were two big blows against my plans to make jam in 2011, and the plum trees in my backyard didn’t produce enough fruit to make even a small batch of jam.  But in 2012, the trees were quite productive, providing me with about 20 pounds of tiny plums (thanks in part to the depluminator, which helped me reach fruit on the upper branches).

Separation Anxiety
With plums that are seemingly all pit and skin, extracting the juice and pulp with a peeler and knife would take forever. It’s a lot faster to “cook and colander” them. My original 2006 post on plum jam showed me using a hand-held strainer that I attached to my sauce pan using some wire.  It was an OK solution, but too easy to tip over and contaminate the strained juice and pulp with pits or skin. 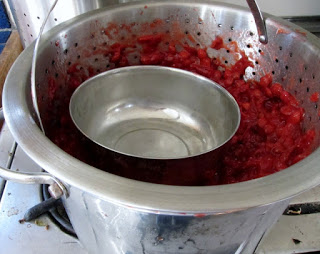 This year, while preparing my tools, I had a brainstorm:  removable steamer basket.

This basket was part of a three-piece kit that I got a while ago: a large pot, a steamer basket, and an insert for cooking and draining pasta (this insert isn’t so great for pasta, but makes a decent water bath for processing six half-pint jars at a time).  Now this is a great solution:  it fits tightly on my favorite jam making pot, is quite stable, and keeps the sticky pulp from going anywhere but into the pot. Furthermore, I can use a flat bottomed bowl to force the pulp and juice away from the pits and skin, as the picture to the right illustrates.  (When the fruit was hot I needed to wear a glove while agitating the fruit since the metal bowl was thin and conductive. With a Pyrex bowl, a glove might not have been necessary. A pot lid might have also worked.)

Extractions
I was more careful with record keeping this year (one of my kitchen themes in 2012 is “weigh everything” — except for avocados, something I tackled in 2010). I started with 9 pounds and 5 ounces of unpitted plums, then added 9 ounces of water, giving a total of 9.875 pounds (unit conversion page, or just type “9.875 pounds in kilograms” into Google to get to metric).  After cooking and straining, I had 8.68 pounds.  Subtracting the 9 ounces of water from the before and after sides of the equation (assume no evaporation in this first cooking stage), I ended up with a beginning weight of 9.31 pounds and ending weight of 8.12 pounds, for a yield of 87% by weight.  For such tiny plums with plenty of skin and relatively large pits, that’s a lot higher than I expected.

This brings me to a minor point about jam and jelly recipes.  Articles about jam and jelly making often stress the need to carefully follow the recipe, especially when it comes to the sugar content.  But since the overall sugar content in the batch depends on the amount of fruit in the cooking pot, a recipe that specifies the quantity of unpitted/unpeeled fruit could be problematic.  Hence, it seems that the best practice for jam recipes would be specifying the amount of fruit needed after pitting/peeling. An addition source of sugar content uncertainty would seem to be the amount of water evaporated during cooking.

Endings
I ended up making four varieties of jam in several batches:  1) the basic plum + sugar jam, 2) the basic plum + sugar jam with some vanilla beans thrown in (after scraping the insides into the fruit), 3) the locavore favorite plum-honey preserves (this year was 100% from Berkeley, as I used honey from Berkeley beehives), and 4) the plum+sugar jam infused with lavender. Unless you have a strong aversion to lavender in food (“this tastes like hand cream!”), it’s a nice combination, with the light floral essence of the lavender providing a high note that contrasts with the deep, acidic flavor of the plums. 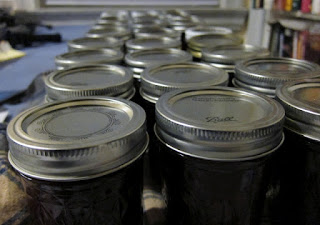