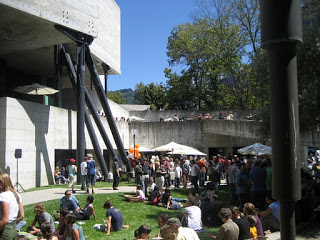 Some birthday parties are enlivened by a clown, a magician, or a karaoke machine. But when an legendary restaurant like Chez Panisse hits 40 in a creative city like Berkeley, California, you can expect something out of the ordinary.

A group called OPENrestaurant provided plenty of surprise and wonder at a party called OPENeducation, where attendees could experience the unexpected, like eating an edible shoe, eating chapati made with flour from a bicycle-powered flour mill, learning about “pre-hippie” bread baking (“Digger Bread,” loaves that were baked and distributed for free by the San Francisco Diggers in the late 1960s) [more info on the Diggers in an update below], and listening to activists delivering their words from the roof of a decomissioned police car. Small radios were scattered around the venue, often playing music, but now and then broadcasting an interview conducted by children (interview subjects included Alice Waters). The education sessions were often led by students from local schools, and so the students became the teachers, ideally giving them a confidence boost. Edible education is one of Chez Panisse founder Alice Waters’ passions, and the Chez Panisse Foundation was instrumental in establishment and operation of the first Edible Schoolyard in at a middle school in Berkeley, and also a key supporter of the healthy lunch initiative in the Berkeley Public Schools (how they cook in Berkeley schools was comprehensively covered by The Slow Cook in 2010). 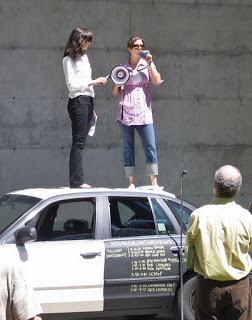 One of the more traditional educational approaches was at the “police car stage,” where interviewers and subjects stood or sat on the car — an homage to the October 1, 1964 protests that kicked off Free Speech Movement of 1964-65 (photos from the day are at calisphere: Mario Savio, Jack Weinberg and more), a movement that had an influence on Alice Waters and others who were part of the early days of Chez Panisse and Berkeley’s “Gourmet Ghetto” in the late 60s and early 70s.

Twilight Greenaway (Grist’s food editor at the time, now managing editor of Civil Eats), kicked off the program with interviews of three activists:

Next, Jen Maiser from Eat Local Challenge interviewed Kyle Cornforth, director of the Edible Schoolyard in Berkeley. Kyle has been at the Edible Schoolyard for 11 years, and has seen how the program has evolved. For example, it took many years for the garden soil to recover from being covered with asphalt for many years. Additionally, the kids get to remake the garden each year, so the beds and planting areas have gone through many transformations. Kyle announced that the Chez Panisse Foundation will soon be changing its name to the Edible Schoolyard Project (it appears that the change has been made). They are also building a new website that will have lots of resources and “potential for sharing” for those who want to establish a school garden or improve one that is already running. 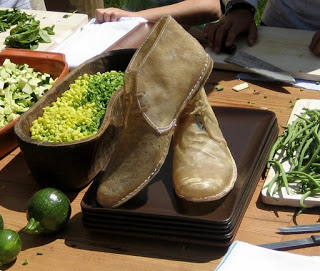 Although only marginally related to the theme of education, a pair of edible shoes was the highlight for me. The shoes — handmade from untanned pig skin from a Chez Panisse pork supplier (Magruder Ranch, on Facebook) by San Francisco’s Al’s Attire— were at the event to pay homage to the 1980 film Werner Herzog Eats His Shoe. Filmmaker Werner Herzog ‘ordered’ this unenviable entree by losing a bet with filmmaker Errol Morris: if Morris would quit procrastinating and complete his feature film, Herzog would eat his shoe in public. After Morris completed the film (Gates of Heaven), it was time for dinner. Fortunately for us, local filmmaker Les Blank captured the cooking, eating, and subsequent interview with Herzog on film, including footage of the shoe stewing at Chez Panisse, with Alice Waters helping Herzog give his shoe the proper treatment.  (Werner Herzog Eats His Shoe is one of the extras on the DVD of Blank’s Burden of Dreams, a documentary about the making of Herzog’s Fitzcarraldo in the jungles of South America.)

At OPENeducation at least one shoe was used as flavoring in a Provencal soup of zucchini, green beans, tomatoes and other vegetables topped with pounded basil, garlic and Parmesan cheese. 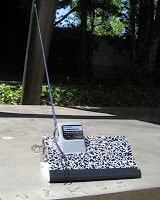 All in all, OPENeducation was a superbly organized celebration with plenty of variety — both culinary and intellectual — in a conveniently compartmentalized venue that allowed multiple classes to be in session at the same time without conflict. The breadth of educational approaches at the event and their focus on youth-led demonstrations should be an inspiration to anyone planning a food festival.

In the weeks leading up to the 40th birthday, the food media in the Bay Area was all Chez Panisse, all the time. You couldn’t swing a bunch of heirloom cardoons on the internet or at the newspaper stand without hitting something related to the birthday. There were remembrances, commentaries about the restaurant’s impacts, radio call-in shows and much more. The Berkeleyside blog has a roundup of some of the coverage and an extensive list of links.

I am a big fan of Mike Duncan’s monumental The History of Rome and Revolutions podcasts (he has produced probably 250 episodes so far, I’ve listened to about 40). While listening to the complete series about the English Civil Wars of the 17th century, my ears perked up when I got to a special supplement about The Diggers. I remembered that term from this blog post and decided to check if the Diggers of the 60s were connected with the Diggers of the 17th century.  They are — if you follow the link in the post above to Wikipedia, you’ll see that the group took its name from the 17th century group. (And also that actor and narrator of documentaries Peter Coyote was one of the founding members.)

The 17th century Diggers are aptly described by Duncan in the supplement as one of the “little revolutionary eddies [of the English Civil Wars], …fascinating little pools filled with political and economic philosophies that don’t gain traction again for centuries.” They were a small group that never had much influence (perhaps a few hundred), but are fun to hear about. Duncan’s 12-minute supplement can stand on its own, so if you are interested, there is no need to listen to the entire series beforehand to understand what he is talking about.

The very short story on the group is that they had a distinctive take on biblical teachings, interpreting part of the book of Acts to forbid buying and selling, and promoted a radical form of Communism more than a century before Marx and Engels wrote their books. They were enthusiastic about growing their own food, even taking over some unused land and turning it into a communal farm, thus attaining the “Diggers” label. This label, it turns out, like many other labels for Civil War factions, was somewhat of an insult, and they might have preferred to be called “the true levellers, ” because their aim was a level economy where all had the same economic status. (The original “levellers” were another faction from the era and they considered the term leveller to be an insult, implying that their policies were more redistributive than they were intended to be.)

On Google Books I found an old book called The Digger Movement in the Days of the Commonwealth: As Revealed in the Writings of Gerrard Winstanley, the Digger, Mystic, and Rationalist, Communist and Social Reformer, by Lewis Henry Berens (1906).  An appendix contains some proposals from Gerrard Winstanley for a new social contract. Here are a few that illustrate their nature:

15. Every household shall keep all instruments and tools fit for the tillage of the Earth, either for planting, reaping or threshing…

16. Every Family shall come into the field with sufficient assistance at seed time, to plough, dig and plant, and at harvest time to reap the fruits of the Earth, and to carry them into the Storehouses…

Laws against buying and selling
27. If any man entice another to buy and sell, and he who is enticed does not yield, but makes it known to the Overseer, the enticer shall lose his freedom for twelve months, and the Overseer shall give words of commendation to him that refused the enticement…

The Unpardonable Sin!
28. If any do buy and sell the Earth, or the fruits thereof, unless it be to or with strangers of another Nation, according to the Law of Navigation, they shall be both put to death as Traitors to the Peace of the Commonwealth. Because it brings in Kingly Bondage again, and is the occasion of all quarrels and oppressions.

29. He, or she, who calls the Earth his, and not his brother’s, shall be set upon a stool, with those words written in his forehead [Ed. note:  what words? “the unpardonable sin”?] …

31. No man shall either give hire or take hire for his work; for this brings in Kingly Bondage.

Image credit for the update:  Page from “Levellers declaration and standard” from Wikimedia Commons, public domain
<end of update>