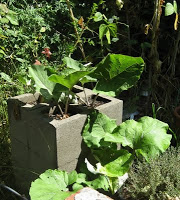 Back in June, I wrote about setting up garden infrastructure to grow burdock root (a.k.a. gobo, Arctium lappa) so that I could have a local source for recipes in Elizabeth Andoh’s Kansha: Celebrating Japan’s Vegan and Vegetarian Traditions (my review of the book is here.).  My plants seem to be doing well, with each one sprouting out several large leaves (whether the roots are growing is, however, unknown). On the off chance that I’m not in a Japanese food mood when the burdock are ready to harvest — and if I’m feeling very ambitious — I could follow the centuries-old traditions of using burdock in liquid refreshments.

My introduction to burdock drinks occurred many months ago at Il Cane Rosso in San Francisco’s Ferry Building. On their reasonably large menu of non-alcoholic drinks was a soda from the UK-based Fentiman’s company called “Dandelion & Burdock.” With odd-ball headline ingredients like those, I couldn’t pass it up. But that night I also didn’t really enjoy it, as the flavor was too weird.  In recent months, however, I have come to like it quite a bit, enjoying its fruitiness (a good amount of cherry) and overall flavor profile — but not enjoying its price of over $10 for a four pack at Andronico’s.

Intrigued by this burdock and dandelion soda, I started rooting around on the internet to learn more.

Wikipedia was an early stop on the research journey, where I read that a dandelion and burdock drink was mentioned in documents written in the 13th century (the citation is Thomas Aquinas’ Summa Theologiae of 1274, but I haven’t seen the reference myself).  A few months later, at the Expo West trade show in Anaheim*, I asked a representative at the Fentiman’s booth about burdock soda. Burdock might seem odd at first because we usually think of it as a vegetable, he said, but if we think of it like other roots such as sasparilla and ginger that are used to make drinks, it’s not so unusual.

Next up was Google Books, a massive information source that is the result of Google digitizing thousands of books, old and new, across a range of topics.  Thanks to the highly usable search engine, I found some great information.

The Herbalist in the Kitchen by Gary Allen (2007), has this in the entry for “Common Dandelion: Taaraxacum officinale“:

Dandelions have been used, in place of hops, in herbal beers. In Canada, dandelion stout was popular. In England, the roots of dandelion and burdock flavor a root-beer-like soft drink called, not surprisingly, Dandelion and Burdock.

Burdock and dandelion also make appearances in the medical literature of the late 19th century, as in the The Era Formulary. 5000 Formulas for Druggists (1893), where the ingredients appear in various recipes for “Blood Remedy” or “Blood Purifier.”

A much better find was the May 11, 1889 issue of Good Housekeeping, a periodical that is “Conducted in the Interests of the Higher Life of the Household.”  Like today’s magazine of the same name, the pages are filled with tips for better living, as well as poetry and short fiction.  What brought me to those pages was an article about summer beverages by Ada Marie Peck that included a few recipes using burdock and dandelion.

But before getting to recipes, I’d like to appreciate the first letter in the article, a delightful rendering of a W rising from a bowl like a wisp of steam (such creative initials appear all over the periodical): 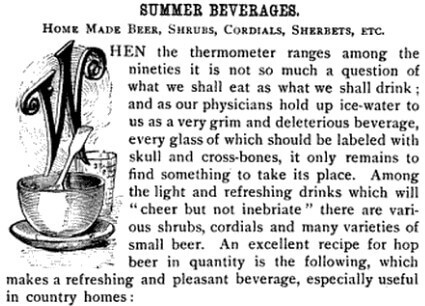 Peck shares two recipes that use burdock and dandelion:

Hop Beer. 1.
For one barrel of beer, use one pound of hops and one-half pound each of ginger and allspice. Put in a keg and boil for half a day, then pour the liquid in a barrel or keg and add one gallon of molasses and a pint of good yeast.  It is improved by adding sarsaparilla, dandelion and burdock roots.  If these are used chop them and boil a long time to extract the strength, then add to the other ingredients.  This beer requires a beer-keg or barrel to hold it and it should stand for about two days before it is ready for use.  It is better to make a half barrel at a time.
…
Root Beer.
For one gallon – a handful of hops, some twigs of spruce, hemlock or cedar, a little sassafras; roots of various kinds – plantain [Ed. note:  plantago major?], burdock, dock [sorrel?], dandelion and sarsaparilla.  Boil and strain, add a spoonful of “ginger molasses” to make it pleasant, and a cupful of yeast.

These are way beyond my kitchen skills, and made even more difficult by the relative lack of detail.  So, for now anyway, I’ll be getting my liquid burdock exclusively from Fentiman’s.

Peck’s article concludes with some intriguing recipes for “Soda Water” that seem to be bases for other drinks, as the high ratio of sugar to liquid implies:

Soda Water. 2.
One ounce of tartaric acid, one pound of sugar, one pint of boiling water, the white of one egg, two tablespoons of lemon, vanilla or pineapple [Ed. note: extract? juice?].  Stir the ingredients briskly, and put in a bottle.  Shake before using.  Two tablespoons are required for one glass, and a quarter of a teaspoonful of soda.  A teaspoonful of sweet cream to each glass is a great improvement.

The second one actually looks feasible, and might be worth a try someday.

* A write-up of my visit to the Expo West natural products trade show is over at the Ethicurean.

The “Summer Beverages” snippet is from page 172, Good Housekeeping, Volume 9, 1889 on Google Books