The Joys of Spring Dancing on Snow (Updated, 12/2/16:  fixed broken links)
The vegetables of Spring have shaken me up and caused some unusual behavior. For my big weekend cooking night, I actually cooked the same main course two weeks in a row. That’s virtually unheard of in my kitchen. But it was so good and so seasonal that I could not resist.

The dish poetically described above is essentially a bed of rice with a vegetable topping. It combines Spring’s best flavors–asparagus, sugar snap peas, fava beans–with the richness of soft goat cheese and heartiness of rice. A bit of lemon zest in the rice adds some bright contrast. 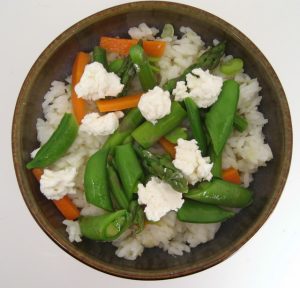 Soon after I made the first batch and long before I started writing the post, Tea (of Tea & Cookies) wrote about a similar dish in a beautiful and useful post about hana-mi, the Japanese tradition of flower viewing. Her post has a recipe for chirashi-zushi, a traditional Japanese dish in which seafood and vegetables are scattered across a surface of seasoned rice. Since my recipe is somewhat similar, I’ve taken the term chirashi-zushi for this treatment.

I used a pilaf/risotto method for the rice to infuse it with flavor and keep the grains separated during cooking. This method involves sauteing aromatics (onion or leek, perhaps some herbs) until soft, adding the dry rice, stirring for a minute so that the grains are lightly covered with oil, and then adding the water. The first time I used an Italian long-grain rice and cooked it without a cover. The second time I was trying to stay local and so I used a California short-grain white rice. The long-grain rice provided a better, less gummy, result.

The scattered sushi concept can be adapted to provide deliciousness throughout the year. In the summer, the rice could be infused with some rosemary and basil, then topped with pieces of tomato, roasted eggplant, and other summer vegetables, with dollaps of ricotta cheese on top. In winter, perhaps a sage-infused rice with pieces of roasted squash, roasted carrot and a hearty cheese.

“The joys of spring dancing on snow”

Method
The first two groups of tasks can be performed more or less simultaneously.

Blanch the vegetables
Set a medium-sized pot of salted water over high heat.

Fill a small bowls and a large bowl with ice water (they will be used to cool the vegetables).

When the water comes to a boil, cook the vegetables by type so as to obtain the ideal doneness. For example, I dropped carrot sticks into the water, let them cook for one minute, added the asparagus and sugar snap peas and waited another minute, then scooped the vegetables into the large bowl of ice water to stop the cooking. The fava beans were already cooked as part of their two-step shelling procedure.

Cook the rice
Heat a few tablespoons of oil in a sauce pan over medium heat. When the oil is not, add the leeks and cook, stirring occasionally until they are soft. Add the rice. Stir for a minute or so to coat the grains of rice with oil. Pour in 3 cups of water and some salt. Stir a few times, then cover the pot and turn the heat to low. Cook until the rice is done.

Assemble the dish
When the rice is done, carefully fold in the lemon zest.

Serve topped with a few small spoonfuls of goat cheese and extra salt and pepper if needed.