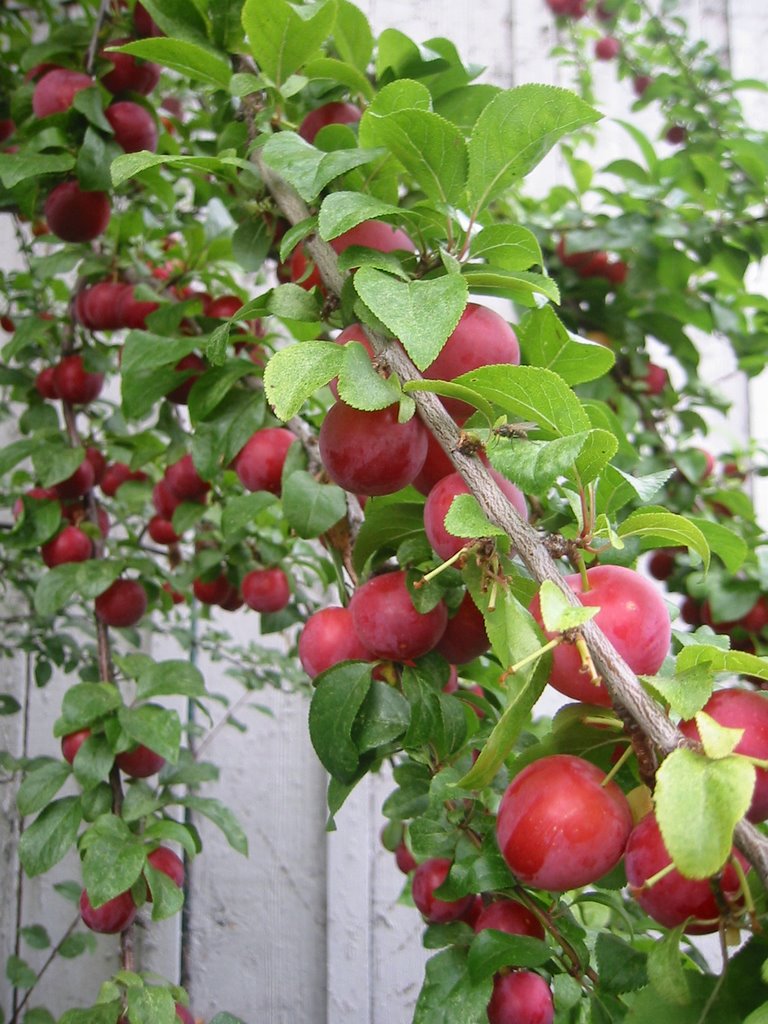 [Updated below]
The edge of my driveway is graced with a plum tree that bursts forth with pinkish-white flowers in the spring and a bounty of fruit in the summer. The fruit is weak in flavor with thick skin and a huge pit. But it can make great jam.

The plum tree is tall and I only have standard size ladders, and thus many plums are out of reach, destined to drop down onto the driveway, where they will deteriorate (or be squashed underfoot).

Necessity is the mother of invention, they say. So last Sunday I got into an inventing mode, scrounged around in the basement, and created……[drum roll] [a frenzy of spotlights on a velvet curtain] [whoosh! the curtain drops]……the depluminator.
Looking at the picture below, one could argue that “inventing” is a probably too grand of a word for the depluminator. “Kludged” might be a better description because the device made from a rake, a box with a hole in the bottom, and a bungee cord (the red band below the box). Operation of the depluminator is simple, but requires some dexterity: you find a bough that is loaded with fruit, position the rake above the fruit, then pull down, all the while keeping the box below the probably trajectory of the falling plums. The rake strips the plums from the branch; the box catches many–but certainly not all–of them. Those with soft heads or expensive hairdos might want to wear a helmet during this procedure…

With the depluminator and a ladder, I collected a few pounds of plums from my tree that were otherwise unreachable. They are currently sitting in my refrigerator, waiting for next weekend’s jam adventure.

Update
In a comment, Anita jokes that I should patent the device and work on marketing it. Just for the heck of it, I did a quick patent search and found that I’m over 100 years too late. U.S. Patent 425,299, “Berry-Picker”, by Charles H. Carpenter and Isaac Briggs, issued on April 8, 1890, shows a fairly similar device: