Rising Income Inequality during the Golden Age of Whaling

If you worked on a whaleship during the Golden Age of Whaling (ca. 1820-1860), you wouldn’t have known your salary. From the lowliest “boy” all the way to the captain, the salary wasn’t a fixed daily amount, but something distinctive to the whaling industry known as the “lay.”  When you a contract to work on a whaleship, you were promised a certain fraction of the net proceeds from the voyage to be paid after your ship finished the voyage. The “lay” was the reciprocal of your share, so a lay of 20 meant 1/20th of the proceeds, a lay of 100 was 1/100th and so on.

Whaling was one of the few industries that had this type of labor contract. Its use has been documented as early as the 17th century, but it is not clear exactly why whaleships adopted the practice — perhaps because it transferred risk from the owner to the worker from loss of the vessel and commodity price drops; or it offered the chance of a big pay day to those who were willing to risk it; or because it strongly promoted teamwork and thus higher productivity.

For a voyage that might last several years, most whalers received two payments along with free (uncomfortable) lodging on the ship and (mostly terrible) food.  The first payment was an advance before the voyage—to go on one last shore-side bender, buy personal supplies for the voyage, to give something to your family, etc.  The second payment only happened if you survived the voyage and didn’t desert (like Hermann Melville did twice). Soon after the return to the home port, the owners of the ship would sell the goods, calculate the expenses from the trip, deduct the advance they gave you at the voyage’s outset, and finally pay you. So the variation in your wages could be huge, depending on how many whales your ship killed and processed, as well as the quality of the oil, the current market price, and how rigorous the owners were with their expense calculations. You might end up with nothing.

As I was researching my earlier posts about whaling, I ran across a remarkable resource, a 500+ page book prepared for the National Bureau of Economic Research about the American whaling industry between 1816 and 1906 (full reference below). In Pursuit of Leviathan: : technology, institutions, productivity and profits in American whaling, 1816-1906 (hereafter referred to as “Pursuit”) was prepared by a team of three authors in academia (CalTech and the University of North Carolina, Chapel Hill). The researchers analyzed thousands of 19th century records to document the economics of the whaling industry. I haven’t read the whole book, but the sections that I read are often mostly comprehensible to a non-economist (I got a little lost, i.e., went into skim mode, in the sections about regression analysis).

While browsing “Pursuit,” I ran across some data that reminded me of today’s discussions about widening economic inequality in the United States and worldwide. This dataset listed the lays for various occupations on whale ships between 1840 and 1858. Since the lay can be a little confusing (a lower numerical value is better), I converted the lay to share of net earnings (1/lay) and also calculated the shares relative to 1840 to see the evolution over time. I then used the Tableau Public tool to make two charts, which are shown below. The first one shows how the share of earnings for each occupation changed over time. With such a wide scale, it’s pretty hard to see what is going on, especially at the lower end for the semi-skilled and unskilled seamen (perhaps Tableau allows y-axis zooming).  Much more revealing is each occupation’s share relative to 1840, which is shown in the second chart.

Several occupations saw a major rise in share, one was relatively flat, and three occupations saw their shares decrease over time. What’s interesting about this — and an analogue to today’s discussions of income inequality — is that the biggest increases went to the officers (first mate, second mate, third mate), while the lower ranks saw decreases. It’s a little surprising that the captain’s share didn’t keep pace with the mates, but not all of the captain’s income was covered by the lay:  he often had a supplemental contract that provided the possibility of a bonus for a profitable voyage, and also received some of the profits from the on-board sale of clothing, tobacco, and other items from the “slop chest.”

What Caused the Divergence?

“Pursuit” gives several explanations for the wage divergence for officers and the less skilled hands.  A wide variety of technological improvements were probably the chief causes.  During the 19th century, sailing ships underwent countless changes. From 1820s to 1870s there was a near complete change in rigging and sail technology: better materials (more iron meant better durability), lighter sails (required fewer crew to raise and lower), replacing hemp rope with more durable chain cables and metal wire.  On deck and below deck the crew had pumps that were easier to operate, and winches and cranes that could be worked with fewer crew.

Interestingly, the most primal and horrific operations — converting a dead whale into oil and other marketable products (like baleen) — were nearly untouched by technological advances.  There were improvements in stoves and tool materials, but while the sailing operations were becoming more and more mechanized, the dirty work like slicing blubber was still manual labor. To be sure, many tried to invent mechanized slicers and other tools, but they were not effective and not adopted. (Advanced technology to kill whales, such as rocket harpoons, didn’t appear until late in the 19th century.)

Improved ship design was a major factor:  whereas early whaleships were converted from the merchant fleet and therefore not optimal (difficult to adapt to whaling’s special requirements, lacking appropriate storage space), as the whaling industry grew, whaling companies started ordering ships that were specially designed for whaling. These purpose-built ships required a less skilled crew, but potentially placed more responsibilities on the officers.

Advances in oceanography and cartography were also important. Remember that this was the era of sail, and so an efficient voyage depended on using the prevailing winds and currents — you couldn’t simply say that you are going to sail to a given location and expect to get there in a reasonable time without favorable winds and currents (in ancient times, traders abroad would often need to wait for months until the prevailing winds shifted to return home).  The U.S. government funded many expeditions, sought records from current captains, and produced many reports to further national commercial and military objectives.  So whereas “gut feelings” and experience might have been the key navigational tools in the early 19th century, more formal skills were needed after detailed charts and other tools were available, thus potentially requiring more educated mates, and therefore higher compensation. The additional responsibilities of managing a less skilled crew might have also pushed up their mates’ wages.

Another parallel with today was the replacement of U.S. citizens with workers from other nations to cut costs.  Whaleship officers tended to be American, but as time went on, the crew became more and more foreign. Wage data from the period show that land-based occupations offered significantly better wages than whaling, so it’s possible that Americans decided to forego whaling in favor of jobs in bakeries, textile factories, blacksmith shops and other 19th century workplaces.

In the end, both capital and labor seem to have found some peace with the new conditions. The owners were satisfied with untrained labor because of low wages, and because they had confidence that the competent and often brutal mates could train and pacify the unskilled hands during the many months at sea. Ships were still fully staffed because there was always the chance of a big payday if the ship returned with a full hold and whale oil prices were high — whaling towns always seemed to attract enough risk takers who could go on years long voyages. 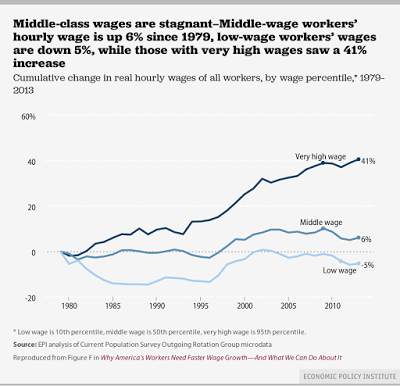 The whaleship drawing is plate 185 from History and Methods of the Fisheries: Section V, The Fisheries and Fishery Industries of the United States, George Brown Goode and a staff of associates, United States Commission of Fish and Fisheries, Government Printing Office (Washington, D.C.), 1884-1887. Public domain. Full text at Hathi Trust and Google Books.