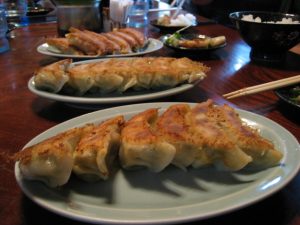 Last weekend, I went to a series of talks about Japanese food and culture sponsored by UC Berkeley’s Institute of East Asia Studies. The forum was held to celebrate the 50th anniversary of the Center for Japanese Studies at the University, with five distinguished scholars from around the world touching on various topics in Japanese food culture and history. Academic talks can easily veer into the obscure corners of a specialist, be full of impenetrable jargon, and require a significant foundation. These were not like that, but were clear, understandable, and fascinating.

Professor Katarzayna Cwiertka of Leiden University (in the Netherlands) talked about restaurants in Japan before, during, and after World War II. In 1944 there was a ban on most restaurants, and so, like speakeasies during the prohibition era, some restaurants went underground, drawing their curtains shut and hanging a closed sign on the front door, while preserving another entrance. Some underground restaurateurs suspected that their phones were bugged and used codes to indicate whether they would be serving on that day.

Gyoza are a Recent Addition to Japanese Cuisine

Cwiertka’s talk included this surprising item: gyoza (dumplings) — which are one of the most popular foods in Japan today — were virtually unknown in Japan before WWII. Until then, most of the Chinese culinary influence on Japan came from the southern China, where dumplings are not so prevalent. After the war, according to Cwiertka, three factors helped make gyoza part of the Japanese diet. First, repatriation of Japanese from the dumpling-eating areas of northern China brought dumpling making skills. Second, a shortage of rice made foods that used other grains — gyoza have wrappers made of wheat — more important. And third, all sorts of outside markets opened up, with most having food stalls that served simple food like gyoza. 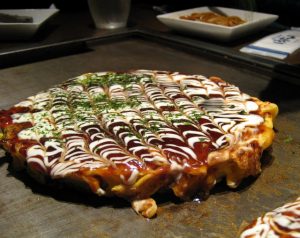 Another interesting post-war creation was the “show” style of cooking popularized in the U.S. by the Benihana chain. Although Japanese restaurants were theoretically off-limits to the occupying American soldiers, the rules were frequently ignored. Apparently, there was a place in Kobe called Misono where cooking was done on large griddles, the kind of place where such things as okonomiyaki (a pancake containing some combination of vegetables, meat and seafood, pictured to the left) and yakisoba (noodles cooked with various vegetables, meat and seafood) are made. American servicemen didn’t much care for okonomiyaki, yakisoba and other the standard offerings, but the owner of Misono created some recipes that they did like, recipes involving lots of beef cooked on the griddle. Soon, he had a hit.

Eventually the “show” part of the experience was added and the Benihana restaurant took off with the idea in the U.S. (These adapted restaurants were so strongly associated with Westerners that they were listed in the “Western food” section of Tokyo restaurant guidebooks in the 1950s and 1960s.) I think that Professor Cwiertka has written some of this history into papers or books, and I’ll need to look them up someday to get the full story (Professor Cwiertka’s webpage has quite a few publications about Japanese food).

The top photo is from my family’s visit to the Gyoza Center (written up in most guidebooks) in the Hakone region of Japan, a short walk from the outdoor museum. The second photo is from a teppanyaki restaurant called Botejyu, which has dozens of locations in Japan, one in China, and several in Singapore.