Gaining My Temper – Chocolate with Praline

In a moment of intense bargain-hunting brought on by the bulk bounty of Surfas (a long-established restaurant supply shop in Culver City, California, and which might be closing or moving), I bought an 11 pound block of Callebaut bittersweet chocolate on my last trip to Los Angeles. I bake a lot of chocolate things, so it seemed like a good idea, especially at their price. It’s pretty easy to run through a lot of chocolate, with one of my favorite cookies using seven ounces in a batch, another favorite using 10 ounces per batch, and so forth.

I decided that I should try to make my own chocolate bars, with my own favorite flavors. The first thing I needed to learn about was tempering. If you work with chocolate in the kitchen or watch food programming on TV, you’ve probably read or heard the term “temper”. Basically, the tempering process changes the crystal structure of the chocolate, resulting in a more attractive appearance, a “snap”, and a slightly higher melting point. Simply melting chocolate and pouring it into a mold will result in inferior properties like a dull sheen and more bending than snapping. Chocolate expert David Lebovitz has a brief explanation of the science behind Tempering Chocolate and a method for at his blog (his chocolate book probably also has even more). 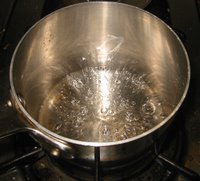 My first flavoring attempt was very simple. Make some almond-pecan praline, crush it, and pour tempered chocolate over top. Shuna of eggbeater has some great words and photos of the process of making praline, which is basically created by mixing nuts into molten, carmelized sugar.

Start by toasting some nuts, and then chop them roughly. Prepare the surface onto which the very hot mixture (definitely above 212 F) will be poured. A silicone mat, parchment paper, or foil on a baking sheet works nicely. 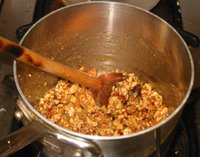 Stir water, sugar and cream of tartar together in a sauce pan, then cook until syrup is a light amber. To get an accurate view of the caramel’s color, carefully extract a small amount and put it on a white plate. Add the nuts, and stir until mixture is a deep amber color. Scrape the mixture on the parchment, silicone, or foil. Some recipes for this addictive sweet can be found at Epicurious: Almond Praline and Hazelnut Praline. After the praline cools, you can either break it by hand, chop it with a knife, or pulverize it in a food processor.

As the praline was cooling, I went about tempering the chocolate. The process is relatively simple, but requires patience and careful observation. A few degrees on either side of the targets can significantly degrade the final product.

Lacking a full kit of chocolate making equipment, I had to improvise to make the molds. I tried two approaches: free-form blobs and plastic biscuit cutters (shown below). Neither worked terribly well. The biscuit cutters were too deep for accurate chocolate pouring. The blobs were, well, blobbly and hopelessly irregular in all directions. The end result of using these methods were chocolate bars that were too thick for me, but the flavor of the pralines in dark chocolate and texture of the tempered chocolate was amazing. It’s hard to go wrong with chocolate, caramel and nuts. 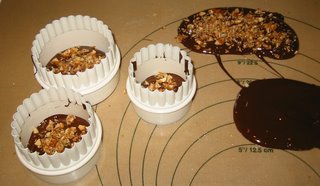