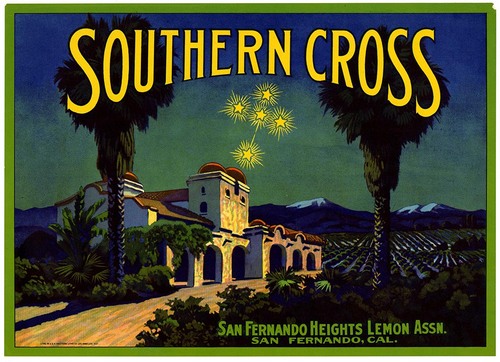 In the excellent Pat Jacobsen’s Millennium Guide to Fruit Crate Labels, the author calls fruit crate labels “accidental artifacts.” It’s a good description. They were never meant to be collected, put into price guides, or hung on a wall.  They were created to sell fruit, to build or maintain a brand, to be used to label a crate and then be discarded. Yet an active collector community has evolved, libraries build collections (some holdings in California libraries), and many websites and antique stores sell labels. They are actively sought by private and public collectors:  Jacobsen reports that in 1992 there were $250,000-300,000 in label sales (in 2016 dollars, that’s $428,000-514,000, via BLS Inflation Calculator); individual collections have sold for $250,000 (early citrus labels) and $51,000 (Washington apple labels).

Most of the spare or obsolete labels were destroyed: tossed in the trash, burned, used as scratch pads in the packing house or at the farm. But some survived. They were forgotten in the back of warehouses; or saved by employees because they looked nice or for sentimental reasons; or saved as a record of who you worked for or with. Some design houses kept archives of their label work, or had boxes full of extra labels. Discoveries still occur now and then: a box in the loft of a packing house, packages in the bottom drawer of a dusty file cabinet, a file folder in an attic.

For some farmers and packers, the idea that fruit crate labels could be collectibles with a dollar value was a surprise. Jacobsen recounts the tale of a pear grower who was on vacation in San Francisco and noticed one of his labels for sale in a shop on Pier 39. He remembered that he had a few pallets of old labels in his buildings so he decided to spare them from destruction: “If not for this,” he said, “I would have gotten rid of all mine.” (Jacobsen, page 36)

An accidental artifact is certainly not unheard of in the world of collectibles — the vast majority of restaurant menus weren’t meant to be saved, for example, but there are active collectors who will pay significant funds for old menus and libraries around the world have large collections (like the the Buttolph Collection of Menus at the New York Public Library, which I have blogged about in the past* ).

Jacobsen calls himself an “agrilitholigist,” someone who seriously studies printed materials about agriculture (agri for agriculture, litho for printing). He sees labels as part of the historical record, showing lost locations, old ideas, and our ancestor’s lifestyles. One prominent example from Jacobsen is the township of Monticello in California’s Berryessa Valley. It was once a lush farming area with fruit trees and packing houses that produced many brands. Today, however, it is covered by Lake Berryessa, so labels are one of the (idealized) records of the lost valley.

Another example is from the Santa Clara Valley at the southern end of the San Francisco Bay, an area that was once called “The Valley of Heart’s Delight” and was renowned for its cherries and apricots (especially the coveted Blenheim variety). Today it is Silicon Valley, a badly planned sprawl of low-rise office parks and low-density housing (but, to be sure, plenty of backyard fruit trees, some perhaps from the original farming days). 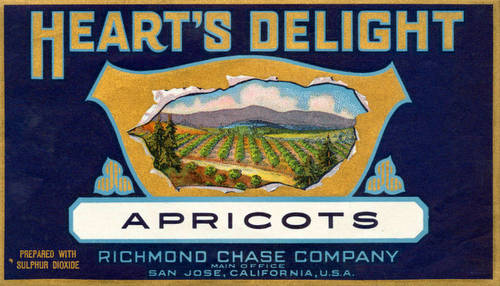 Collecting in the Internet Era

Jacobsen’s book was written during the days when the internet began to be part of everyday life for millions more people, and so he devotes quite a few pages to how to use the internet to buy or sell labels. Naturally, eBay gets a lot of ink, since it was a revolutionary new tool for collectors. It also changed the dynamics of collecting. Labels were far easier to buy and sell, the barrier to entry was significantly dropped. It also skewed prices: Jacobsen notes that some labels sell on eBay for much higher prices than are commonly accepted by collectors. These high prices aren’t because of a sudden reevaluation by collectors, but instead the result of non-collectors bidding up the price because they simply want the label: perhaps the Kardashian’s just adopted a greyhound and so greyhound label prices skyrocket for a few weeks; or the purchaser lives in Ventura County and was willing to pay top dollar for a Sespe label. (Or the purchaser lives in Berkeley and might pay a pretty penny for a Berkeley Apricots label.)

Both of the books I consulted (see references section below) defined three eras of fruit crate labels, which I’ll describe below with an example label chosen from the California Historical Society’s (CHS) label collection. The labels in the CHS collection are not dated **  and the definitions for each era are fairly general (I’m sure that fruit boards didn’t send out memos specifying design guidelines), so these choices might not pass muster with fruit crate label historians, but they’ll make the point.

The first era, running from the first labels (around 1885) to about 1920 is the “naturalistic era.” Popular themes were flowers, farming, children, geographic scenes, Native Americans, and cowboys. The (undated) label below is my guess for a “naturalistic era” label, a Native American in the Southwest making a basket (even though the orange farm is in Ventura County, California — it’s not uncommon for a label to show an areas far from the fruit, like Weaver or various labels showing San Francisco, such as Nob Hill pears, or Pacific Pride grapes). 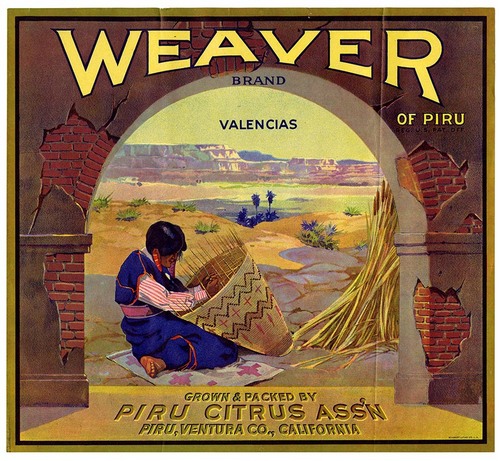 The “advertising era” stretched from roughly 1920 to 1935. The beginning of the era was the Roaring Twenties, and America was booming, so the labels on fruit crates had an optimistic feel with images of prosperity and eye-catching graphics. It was also an era of nutritional advances, so some labels tried to push the health benefits of their contents. Diving Girl Apples is a good example of this, as it shows healthy young people enjoying their leisure time at the water. The diving girl divides the frame, drawing the eye to the brand name and apples (the red slippers are an interesting touch, perhaps the “water shoes” of the era, or a taboo about showing feet). 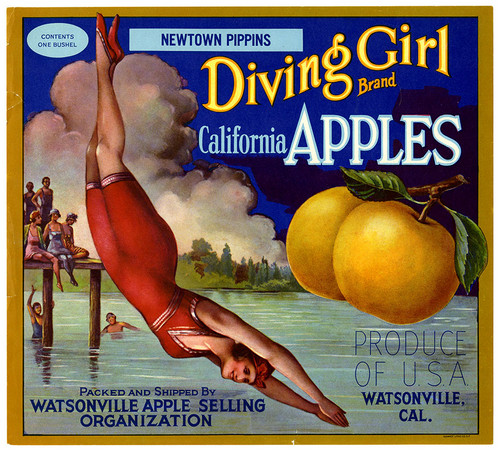 The “commercial era” ran from roughly 1935 to the end of the fruit crate labels (around 1955). One of the label design goals in this era was retention of current customers, so there was a trend towards simplification: bold lettering, stunning patterns, vibrant color. K-O Apples is a great example of this: it is simple and direct, the big shiny red glove reminds you of an apple, the K-O name is easy to remember. 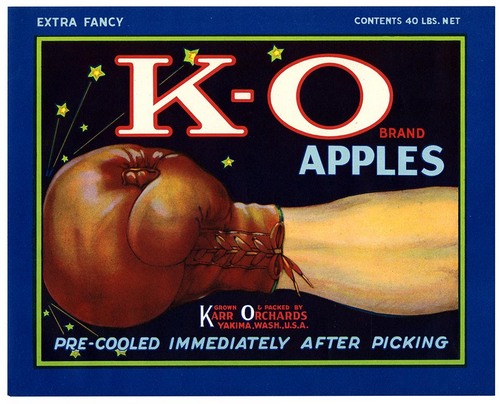 Jacobson gives two examples of labels having new lives in the post-label era: 1) a Congdon apples label morphed into a label for Congdon Cellars wine (Yakima Valley, Washington), with the Congdon Castle as the primary design element (I was unable to find a photo of the wine label). 2) A Bocce brand grape label was the inspiration for a Robert Mondavi label (see the grape label at the National Museum of American History, see the wine label at the Wine Lovers’ Page). Bocce grapes had a special meaning to Robert Mondavi:  it was a label used by his father, Cesare Mondavi.  Cesare Mondavi came to the U.S. in 1906 from Italy and first settled in northern Minnesota. In 1922, he moved to Lodi, California, where he started a wholesale wine grape buying business, sometimes shipping in crates with the Bocce label (even though it was prohibition times, wine grapes had a market because the Volstead Act allowed families to make up to 200 gallons of wine annually “for personal use”). Eventually, Cesare shifted from grapes to wine at the Charles Krug company. (Related: Margrit Mondavi, widow of Robert Mondavi, sometimes called the “matriarch of Napa Valley” for her work promoting the arts in the region, died this week at the age of 91).

Notes
* My previous posts about the Buttolph Collection of Menus at the New York Public Library: The Whale Steak Luncheon Menu, Food Conservation Messages during WWI, Menus from 1917 and 1918: Magicians and the U.S.S. Oklahoma. (Return to text)
** Some printers put a “bug” on their work — a small mark added by the printer for identification purposes — and this can be a clue for dating a label, though it often requires additional research since the bug is rarely something obvious like “1919” or “05/14”.  (Return to text)

Image credits
Although fruit crate labels are passed around the Internet with abandon, not all have passed into the public domain, and their creators (or current owners) still own the copyright. Sometimes this gets a little confusing or contradictory, like the Boston Public Library’s assignment of Creative Commons licenses to labels while also stating that “rights status not evaluated.” Therefore, the labels I’m using in this post are from a source which has declared that there a “no known copyright restrictions” or “public domain.”