Embracing Bitterness For A Day 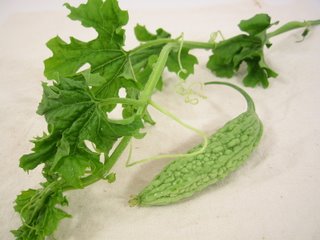 Bitter Memories of Momordica Charantia
My first three experiences with bitter melon were unpleasant. The first was before I knew anything about it and so I just tried a Thai recipe. It was inedible. The second was in a Bangladeshi restaurant in Los Angeles (New Pardes). A little better, but I didn’t finish the serving. And the third was in the form of bitter melon greens, which I added to a soup, raising the bitterness level beyond my limit.

But the bitter melon’s appealing green hue and my lack of shopping willpower at the Farmers’ Market made me try it again last weekend. This time I tried two relatively simple preparations.

Baked Slices
I thinly sliced the vegetable in rounds (thickness of 1-2 mm), removed the large seeds that I found, then tossed it with some salt. I let it steep for 30 minutes, then rinsed the slices in cool water and put them into a drainer. At this point, the vegetable had a pleasant aroma that reminded me of apples. The salting, steeping and rinsing process is theoretically a way to remove some of the bitterness. After draining, I tossed the rounds in some vegetable oil and salt. Finally, I arranged the rounds onto a Silpat non-stick sheet and then baked them in a preheated 450 F oven for a few minutes until they were golden brown.

The results were actually good. In the first hour after the slices came out of the oven, they were nicely crisp and not excessively bitter. The flavors are subtle, but the overall impact is not—it jolted my tastebuds and left behind a mild lingering bitterness like [insert trip down memory lane here].

Fried Slices
I sliced the bitter melon in the same way as above, but did not mix it with salt and steep it. Given salt’s propensity to remove liquid from objects, that would have led to trouble in the frying step. I heated some quite a bit of oil in a pan until it was hot enough (I’m a rookie at deep frying, and did not follow the temperature guidelines). I fried about 6 or 7 pieces at a time until they were nicely brown in the middle. However, because of the annular shape of the slices, the inside turned nicely brown before the outside was done.

The deep-fried slices were a textural disappointment, displaying crispness only on the inner edge, and a soft outer edge. But they tasted good (don’t most deep-fried things?) and the bitterness was not excessive.

Putting Bitterness Behind Me
Will I buy this vegetable again? I doubt it. The flavor of the bitter melon was pleasant enough, but overwhelmed by the cooking treatment. Furthermore, both preparations took a fair amount of time—time that I would rather be spending on other vegetables (especially this time of year).