The Spring vegetables at the farmers’ market again inspired me to cook a Japanese-style meal, using the same approach as the previous meals: preparing a variety of vegetables using several cooking methods. Most of the methods are well-known to me (simmering, searing, steaming) but my skills related to the “raw” method is currently limited to simple preparations like dressed greens. Therefore, to expand my horizons and add some zip to my meal, I made two Japanese-style quick pickles.

The word “pickle” brings to mind an immense range of flavors, shapes, and textures that spans the globe: the saucy, spicy, incendiary pickles of India; the classic deli cucumber pickle; pickled carrots and jalepeno chiles served in Mexican restaurants; the incomparable and varied kimchi; to name a few. (There is also that abomination known as the sweet pickle, but I try not to think of those.)

Japanese cuisine has a variety of pickles (tsukemono in Japanese) using vegetables such as daikon, cucumber, plum, and eggplant preserved in media like vinegar, salt, rice bran, and miso (fermented bean paste). Donald Richie, in A Taste of Japan, writes “The appeal of tsukemono is that they taste so fresh. They may have been put up the year before, but the taste is that of living vegetables. One is not eating mummified food, but rather, something close to the vegetable itself, as it was last summer….Even in the dead of winter, one bite and you are in full summer again.” (p. 88)

Somewhat counterintuitively, there exists a wide range of perishable pickles — pickles with a shelf life of just a few days, not months or years. For these, “pickle” might be the wrong word, and Elizabeth Andoh writes “It would be more accurate, perhaps, to describe tsukemono as ingredients that have been ‘transformed’ without cooking.”

Update: The Cultured Pickle Shop in west Berkeley makes two traditional tsukemono, daikon in rice bran and carrots in sake lees. I bought a jar of the daikon and find them to be delicious. The transformed vegetable is intensely flavored, so just a few small pieces can enliven a meal.

My First Attempts at Vegetable Transformation

The two batches I made did not rise to the culinary wonder that Richie describes, but they were certainly transformations. The first (daikon and carrot soaked in a vinegar-sugar mixture) were very easy to make. I just cut up the vegetables, mixed them with the liquid, and waited. They were delightfully crunchy, but had a musty, funky flavor — perhaps the daikon wasn’t of sufficient quality. Many other vegetables can be pickled this way, so when cucumbers arrive at the farmers’ market, I will try again.

The second batch was made using a recipe from the Washoku cookbook, charmingly titled “Impatient Pickles.” The recipe calls for cabbage and cucumber, but since cucumbers were not at the market, I used only red cabbage. To make the pickle, I thinly sliced the cabbage, tossed it with some coarse salt, and waited for 10 minutes or so. Then, after pressing and kneading it with my fingers, I needed to “weight” a while longer. That is, put the cabbage under pressure so that it would release its liquid and be transformed by the resulting brine. There is a special machine for doing this (called a shokutaku tsukemono ki, “tabletop pickle pot”), and Andoh gives an alternative of using heavy books protected by plastic bags. But I think I found an even better alternative, at least for small quantities.

The photo below shows my method of weighting down the pickling vegetables. A large sized working glass on the outside, a standard pint beer glass on the inside (filled with water), and a bottle of liquid placed inside the pint glass. The pickles sit in that configuration at room temperature for a few hours, or in the refrigerator overnight. 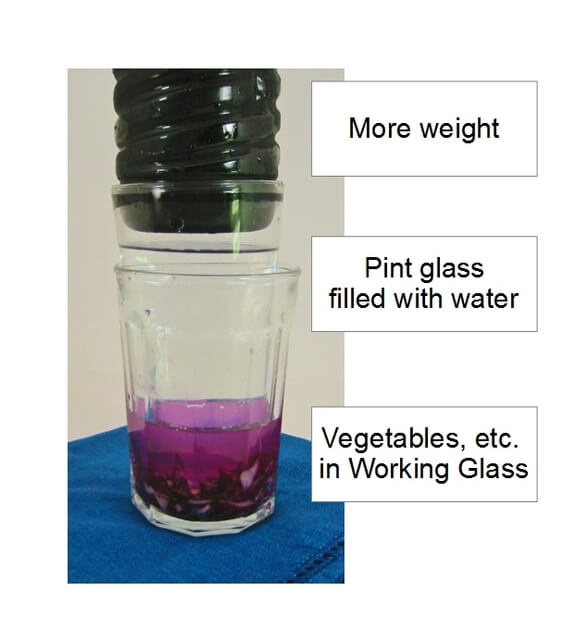 These pickles had a vibrant purple hue, a satisfying crunch, but a bitter and one-dimensional flavor. When cucumbers are in season, I will try again.

Despite the pickle disappointments, the meal that they were served in was quite delicious. It consisted of

The Sources of the Produce 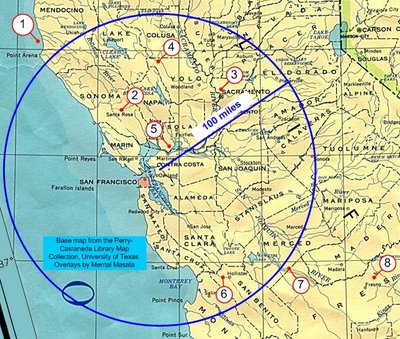