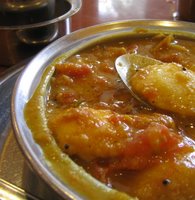 A Shock to the Senses
For someone used to the low-key, climatically mild, and well-sidewalked San Francisco Bay Area, Kuala Lumpur can be shocking. It’s hot, often chaotic, and pedestrians need to take a combined approach of aggression and defensiveness when trying to cross a street (even when the walk sign is on). The noise of zipping motor scooters and ancient buses assaults any sense of calm you might have.

Nonetheless, there are many reasons to like the city. For one, the food is great: fresh, skillfully prepared, clean, and interesting. Malaysia is positioned on a major Asian trading route, so there has a long history of cultural mixing, and it shows in the restaurants and markets, with influences from China, Thailand, India and elsewhere. And since many non-Malays have stayed in the country, relatively “authentic” versions of foreign cuisines are available. Like the mini-idli in sambar from South India pictured above (from Saravana Bhavan in Little India).

Bazaars and Lights
I was in Malaysia during Ramadan, a month of fasting and contemplation for Muslims. During the late afternoon, food and drink bazaars sprout up in various parts of the country to help families prepare for their post-sunset fast breaking and subsequent meal(s). I was not able to see any of the great bazaars in full swing and thus don’t have pictures or comments. If you are curious, I recommend visiting Masak-Masak for several great posts about the bazaars with plenty of pictures (one, two, and more).

A frequent offering at the Ramadan bazaars are kuih (also spelled kueh), which are little cakes and sweet things. The pink and white kuih pictured to the left was made from rice flour, coconut milk, sugar, and water, and was steamed in several stages to obtain the layering (sort of like 7-layer Jello, one of the desserts of my childhood). The yellow and blue item had a base of sticky rice that was cooked with coconut milk, and topped with a coconut custard.

Deepavali (the “Festival of Lights”, also called Diwali) was also celebrated during my visit, and although I was able to visit a few of the festival bazaars, I did not run across any notable sweet stands. You can find a nice treatment of the sweets of Deepavali in KL at Eating Asia (a must-read — and must-see — blog if you are interested in Southeast Asian food and culture).

Putting Instant Noodles on the Menu 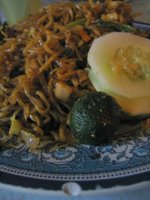 In some regions of Malaysia, instant noodles have become part of the street food scene. One of the stars is “maggi mee goreng” (literally: Maggi-brand noodles fried). It consists of the instant noodles with spices, vegetables and other items. On my previous trip I did not try them, but this time I was sure to try “maggi mee” (as part of my first meal in K.L., at Devi’s Corner, a Bangsar landmark). It was OK, but I don’t really see the point of a restaurant using pre-fried instant noodles instead of normal noodles. I would have rather eaten another masala thosai or roti canai.