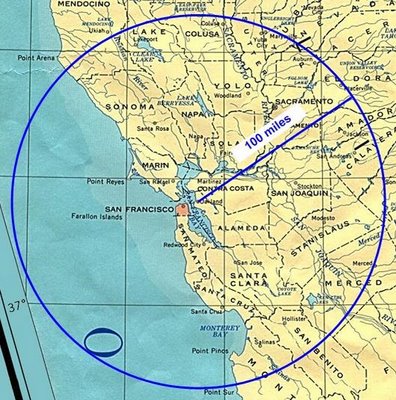 USGS map downloaded from the Perry-Castañeda Library Map Collection,
University of Texas at Austin, found via Wikipedia:Maps.
Post-processing with Microsoft Visio and the tools at pixoh.com

An Alternative to Petro-Eating
The American food system is powered by an immense amount of petroleum: raw materials are transported across the nation, converted into a product, sometimes wrapped in layers of plastic and shiny cardboard, transported somewhere else for sale, and then carried home for consumption, generally with fossil fuels powering each step. The Oil in Your Oatmeal, an article in the San Francisco Chronicle, described one eater’s investigations into the far-away origins of his breakfast, which included oats from Europe, coffee from the tropics, and organic raspberries grown in South America. One of today’s most eloquent thinkers on food production is Michael Pollan, and you can find an audio stream of an interview on NPR’s Science Friday, a Q&A session at the New York Times, and an interview at Truthdig magazine.)

One way to partially lessen the impact of eating is by choosing foods that were grown close to where you live. This act–which is often not easy and requires old ways of thinking–can also lead to an appreciation of seasonality and more enjoyment at the table. For example, local vine-ripened tomatoes taste substantially better than those grown on an endless industrial farm and trucked across the country, especially after you have been waiting months and months for the season to begin (I think I had a dream about tomatoes last night). Eating local can also help keep farming as a viable alternative to shopping malls, office complexes, and housing subdivisions. And eating local can assist the survival of traditional foods andculinaryy techniques, such as varieties of apples or tomatoes that have been grown in a particular region for generations because of their flavor and compatibility with the local conditions (see Raymond Sokolov’s Fading Feast for the story of several disappearing foods).

The Challenge
To help stimulate discussion and explore creative solutions about local eating, a group calling themselves the Locavores started an Eat Local Challenge, which this year will be in May (for California residents, at least). I will be devoting my month to cooking and eating local, and will, of course, post some of the results at Mental Masala.

In the Announcement for the May 2006 Eat Local Challenge, Jen asked three questions, which I answer below:

1. What’s your definition of local for this challenge?

I will be using the Locavore’s 100-mile radius as my “local” definition. The region is shown in the graphic above.

2. What exemptions will you claim?

In my cooking, I will exempt salt, black pepper, soy sauce, and vinegar from the challenge, and stretch the circle a little bit to include ginger root from Vang Farms in Clovis, California (160 miles away, but a vendor at the Berkeley Farmers’ Market). Soy sauce and vinegar are important exemptions because I plan to make several Japanese-inspired meals, including some pickles to eat with rice from the Sacramento Valley. Regular readers of Mental Masala know that I use a lot of spices, imported lentils, and other Asian products, so my cooking will undergo quite a change in May.

In everyday eating, I will continue to drink coffee and tea, and use a little bit of refined cane sugar with them.

3. What is your personal goal for the month?

I would like to have every one of the meals that I cook this month be made using local ingredients subject to the limits in #2 above. It won’t be practical to have all of my meals be from local ingredients (business meals, travel, and so forth), but since most of what I eat is what I cook–and little of that is from a mix or pre-made, my local fraction will end up to be fairly high.

What is in the “Pantry”
The above-average rainfall of 2006 has led to a delay of many crops, especially fruit. My “local pantry” currently includes