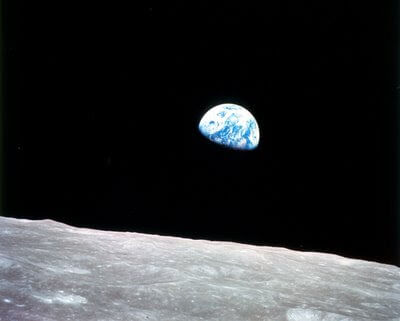 On December 21, 1968, three NASA astronauts in a small space capsule were propelled out of Earth’s atmosphere by a 363 foot tall, 3350 ton Saturn V rocket. It was the Apollo 8 mission, and it was ambitious: the astronauts would be the first humans to orbit the moon while also performing numerous tests of equipment in preparation for a moon landing in 1969 (including the lunar module). As they orbited the moon, astronaut Bill Anders took the photo shown above, which was the first photo of the entire earth from space. Satellites and previous missions had photographed parts of the earth, but none had covered the whole planet. Because of this photo and others from that mission, some have we ended up discovering the Earth on our mission to the moon.

Although later photos and video, like the bootprint, astronauts walking on the moon, or the moon landing itself, were also iconic, this photo might have had more long-term significance because of the way it gave humanity a new perspective on our condition. Some have even argued that the photo was one of the critical stimuli that made the first Earth Day happen.

Living on Earth recently had an interview with Robert Poole, the author of Earthrise: How Man First Saw the Earth about this photograph.  You can read the transcript, stream the audio, or download an MP3 of the segment here. At the New York Times, the Dot Earth blog by Andrew Revkin has some comments on the photo and a much more recent video of an earthrise; the on-line archives of the Times have an appreciation of the photo from 1998. NASA, of course, also has plenty of commemorative material.

With a new year just around the corner, it’s worth remembering this photo as we think about how we might try to lessen our impact on our fragile home.

More coverage of Apollo 8
The Apollo 8 mission has also been covered in documentary form by portions of the feature film In the Shadow of the Moon (I wrote very positive things about the film here) and an episode of the American Experience called “The Race to the Moon.” The mission was dramatized in episode 4 of From the Earth to the Moon (a miniseries that offers a new look at the people that made the space program happen, including the engineers who designed the lunar module, the wives of the astronauts, and the journalists who covered the space race).

Random link from the archive: Ocean Park through my Own Eyes