Not a Free Lunch, but a Good Deal: Comparing Crickets to Other Livestock 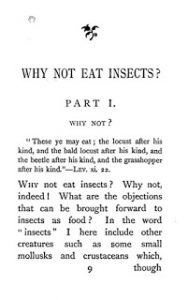 In “Crickets Are Not a Free Lunch: Protein Capture from Scalable Organic Side-Streams via High-Density Populations of Acheta domesticus,” the results clearly supported the “no free lunch” title: feeding “free” waste food or crop residues to domestic crickets leads to high mortality and low weight gain.

A free lunch is great, of course, but wouldn’t we also be happy with a lunch that is a great deal?  Crickets might offer just that:  a source of protein that can be raised on food waste and offers top-tier protein conversion efficiency.

My previous post on the study focused on Lundy and Parrella’s feed quality results and added some of my own proposals for potential food waste streams (most were not very good). The paper also contained another important component that I didn’t write about: how crickets compare to other livestock in terms of feed conversion. With concerns about how a growing world can be fed, it is important to efficiently use our limited resources.

Extending the Comparison
I extracted the results for the crickets on the high quality feeds from Lundy and Parrella and then dug into my literature collection for some additional results, with special focus on aquaculture. Aquaculture has been booming in the last few decades and holds great promise.  However, because it is often an exercise in feeding little fish to big fish, there are concerns about damage to aquatic ecosystems (the little fish are an important part of the food chain for other fish, seals and other mammals, and sea birds).  In addition, aquaculture can have trouble with waste disposal, parasites from farms crossing over to wild fish, and problems related to all large monocultures (like dealing with disease).

The chart below (built with the Tableau Public tool) shows the protein conversion efficiency results. The results need to be taken with a grain of salt, since there is a fair amount of variability in these calculations, especially on the edible weight fractions and different performance for different breeds or husbandry practices. Each item in the chart is followed by a parenthetical note that defines the source of the data, which is explained in note [2] below (and also below the chart).

Crickets fed on commercial poultry feed are in the first tier of conversion efficiency along with farmed Atlantic salmon and broiler chickens, with efficiencies of around 30%. That’s somewhat interesting, but since the crickets were fed a premium formula of industrially-farmed grains and legumes, the result isn’t nicely aligned with the hype about insects. Insects are often advertised as magical food generators, so let’s focus on the efficiency for crickets on the food waste diet [3].  Those crickets fall into the second tier along with several species of farmed fish. And that’s a lot more in line with the hype — in this case, “crickets fed on food waste are as productive than many popular farmed fish.” 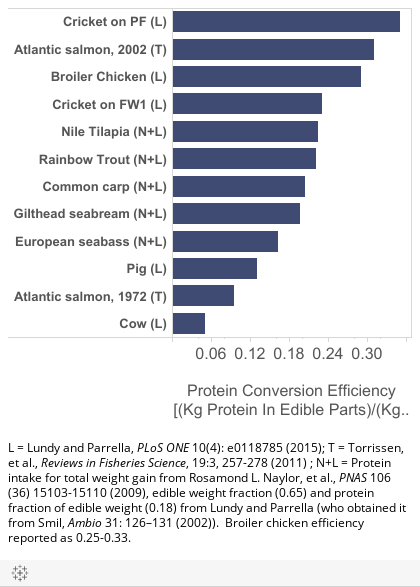 The protein conversion efficiency results above make a good case for crickets — on paper. But when the product hits the plate, it’s another matter, as few people are going to replace their salmon steak or whole seabass with a cricket-based dish (manufactured cutlet of processed cricket anyone?). Or, to look at the comparison from the other direction, you don’t hear people talking about using tilapia flour in protein bars or as a protein supplement like they talk about cricket flour. So food visionaries will need to do lot of thinking about how crickets will fit into the future of food — it won’t be a direct swap-out situation. I can easily see insects as a “sustainability extender” for ground beef, meat-glue-enabled chicken nuggets, or sausage [4]. Or replacing the soy or wheat gluten in a meat substitute [5].

As food technologists and chefs work on uses for crickets and other insects, the microranchers will be working on their own issues, like improving efficiency. Between 1972 and 2002, the protein conversion efficiency of farm-raised Atlantic salmon rose from 10% to 30%, thanks to changes in feed formulation, breeding and other practices. Could crickets and other insects see similar major gains? Insects are much simpler than salmon (or dairy cows or pigs), so I don’t know what kinds of biological boundaries exists, but if insects take off as a food source, the companies raising them will certainly work to get more output for less input.

Notes
[1] FW1 is “the solid, pasteurized, post-process filtrate from a proprietary, aerobic enzymatic digestion process [29] that converts grocery store food waste into 90% liquid fertilizer and 10% solids (the portion used in the experiment),” where [29] refers to “California Safe Soil. Fertilizer from food: H2HTM. 13 May 2014. Link”
[2] L = Lundy and Parrella; T = Torrissen et al.; N+L = Protein intake for total weight gain from Naylor et al., edible weight fraction (0.65) and protein fraction of edible weight (0.18) from Lundy and Parrella (who obtained it from Smil). Note that these estimates are used for all of the fish (actual values might vary across species and even for different sources of the fish, e.g., Scotland vs. Chile vs. Norway).  Note also that the broiler chicken results were reported as a range from 0.25 to 0.33 in Lundy and Parrella; I plotted the average.
[3] Recalling the first note, the food waste conversion process creates two valuable products: liquid fertilizer and solids. The cricket feed was only the solids, so the fertilizer can go to growing more crops.
[4] The LocoL restaurant that recently opened in the Watts neighborhood of Los Angeles (and soon to open in San Francisco’s Tenderloin) is keeping burger costs by supplementing the ground beef with grains. Hear co-founder Roy Choi talk with Evan Kleiman about the restaurant at KCRW’s Good Food
[5] On the subject of meat substitutes: 1) I recommend pieces by Tom Philpott and Mark Bittman about fake meat and its role in improving the sustainability of the food system, 2)  At Food52, examining if insects are an option for vegetarians (My personal “vegetarian line” is drawn above insects, so I have no ethical qualms about eating them. I am hardly a philosophical purist on the subject).

This work is licensed under a Creative Commons Attribution-NonCommercial-ShareAlike 2.5 Generic License.
Secured By miniOrange