Or are you worried that kale’s recent entry on to some McDonald’s menus, will make it totally uncool?

Broccoli leaves and cauliflower leaves could be the alternative you are looking for.  They are nutritious, tasty, and offer extra karma points since they are often considered waste. 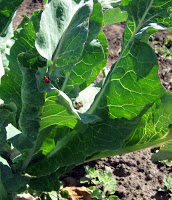 On her Adventures in Yogaland blog, Heather Haxo-Phillips (one of my yoga teachers at Adeline Yoga in Berkeley) was writing about her “fairy godparents” in Jordan who were hosting her while a massive international bureaucratic logjam was being cleared.  In a recounting of daily life at the house, she wrote that “One highlight was stuffed leaves of cauliflower. The cauliflower here is HUGE and so are the leaves. Mary went in the fields and carefully cut dozen of leaves. She stuffed them with rice, vegetables and spices. Then steamed them and served them to me.”

A little while later, I was listening to the May 30, 2015 episode of Good Food from KCRW and the market report (from the amazing farmers market in Santa Monica, California) featured a chat with Bruce Kalman, chef at Union in Pasadena. Kalman has a bit of a reputation as a warrior against food-waste and much of the segment is about how his restaurant uses things that most people think of as garbage.  At the beginning, he mentions cauliflower leaves in passing, but doesn’t say exactly how he has used them. Here is a page with the audio embedded as a SoundCloud player (the cauliflower leaf part is at the beginning).

Update, 8/23/15:  The Trendspotting section (“What’s Hot Now”) of the August 2015 issue of Food & Wine has a sidebar with “5 Fixes for Sandwich Fatigue” from Sara Kramer and Sarah Hymanson of Madcapra in downtown Los Angeles.   Item 1 is cauliflower greens:  “‘After a quick blanch, the stemmy leaves around the cauliflower head can be used wherever other hearty greens like kale would go.  Delicious and also economical — they’d otherwise go to waste.'” 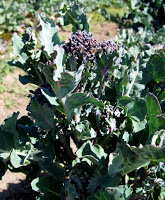 If Foxy Organic has its way, broccoli leaves will become a mainstream vegetable.  In a piece for the Wall Street Journal (sub. only, summary at janeblack.net), food writer Jane Black reports that Foxy Organic is starting to sell broccoli leaves as a stand-alone product (using the trade name BroccoLeaf).  Since you can’t have broccoli without a bunch of large leaves around the stem, the produce company finally decided to give them a brand name and start selling.  The BroccoLeaf home page has a series of news clips that include BroccoLeaf appearances on Rachael Ray’s TV show and two appearances on local news in New York City, so the Foxy marketing team has been hard at work.

Asking “…is garbage the new kale?”, Black also explores other examples of vegetable root to stalk cooking, like Dan Barber’s Blue Hill restaurant having a series of pop-up dinners that served “waste” foods and vegetables to stimulate discussion about the topic (Good Food had an interview with Barber about the dinners).

I have never seen cauliflower or broccoli leaves for sale at the farmers market or grocery store (even at places with huge selections like Berkeley Bowl or Monterey Market), which leads me to wonder about the economics.   Some questions that would be interesting to explore:

In any case, the overarching question that drives all of this is “Does anyone want to buy broccoli leaves or cauliflower leaves?”  If I see them at the farmers market or grocery store I will certainly give them a try.  Or, perhaps, I’ll try to grow some cauliflower in my garden.

Recipes For Cauliflower Leaves (that I haven’t tried)

Searching for recipes wasn’t as easy as it should be because some of the top recipe sites amazingly don’t allow quotes to enclose phrases, so a search for “cauliflower leaves” brings up myriad recipes about cauliflower or things with leaves. Google performs quote-bounded searches so I was able to find a few recipes that look promising: