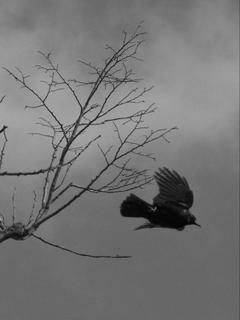 Update, 4/22/12:  Replaced two broken links to Ellsworth Kelly’s art with one that worked today and removed a link to “To Hell with the Birds.”

It was just another crow flying across the way until its wings and tail flayed out and it made a sharp turn to chase a huge fly. The fly escaped, and in an instant the bird had changed direction again, but the fly was too quick. Beaten, the crow gave up, and alighted to a ledge.
The scene almost sounds like it could be a Native America or European parable, doesn’t it? But the chase and escape occured above Sepulveda Blvd. in Los Angeles and reminds me the even the most banal situations can reveal beauty or insight.

A few days ago I was visiting the Christian Science Monitor web site for a news fix, and ran across an eye-opening book review. In Art Makes His World Go Round, Marjorie Kehe, reviewing Michael Kimmelman’s Accidental Masterpiece, wrote:

The evening after I finished reading The Accidental Masterpiece: On the Art of Life and Vice Versa I went to the grocery store, and – expecting only my usual Monday night shopping trip – had a transcendent experience instead.

Food had never before seemed so lovely. The gentle colors and curves of the apricots moved me profoundly and I bought eggplant we didn’t really need just because I couldn’t resist its dark-purple sheen and bulbous forms.

Back out in the parking lot I almost gasped at the dusky tones of the sky and was stunned to note – for the first time ever – the remarkable shapes that cars have.

Be prepared. This is the kind of thing that will happen to you when you pick up this book by Michael Kimmelman, chief art critic of The New York Times.

Your backyard will look like a museum and the subway platform will seem oddly inspirational. What you will find is that art is everywhere. And what could be bad about a discovery like that?

Kehe’s comments reminded me of an exhibit of Ellsworth Kelly’s art at the SF MOMA a few years ago. His work—large monocolored shapes, pairs of colored blobs, or simple sculptures (examples here)—was a bit mysterious and frustrating at first, but eventually I started to get a little bit of understanding. During the above-mentioned retrospective of his work at SF MOMA, there was a documentary about his life called “To Hell with the Birds” (I can’t find much about it on-line). In interviews in the film, Kelly relates that his art is sometimes inspired by the shapes of nature: the curve of a tree’s trunk, the sunlight gleaming on a wall, the shadow of the railing on a staircase (…or not, a future post will address this).

By keeping our mind, eyes and ears open and fresh, surprising vistas will be revealed, and new stories will unfold in front of us.