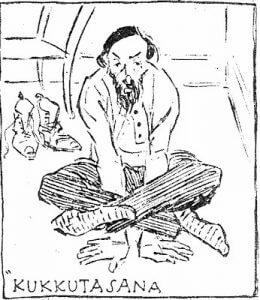 Your initial thought might be that I pulled the subject line from a recent newspaper, but would you believe that the line appeared in 1898? It’s true, there was a mini-boomlet of yoga in New York near the end of the 19th century, and the New York Herald devoted nearly a whole page to the “amateur contortionists” in a tiny subset of New York’s high society.

I learned of this article while reading The Subtle Body: The Story of Yoga in America, by Stefanie Syman, a readable history of the many incarnations of Yoga in the United States, beginning with Emerson and Thoreau, and ending with Bikram and Jois. Curious to see the whole article, I tracked it down in the newspaper microfilm room at the local university, and thanks to improvements in microfilm machines, was able to directly save images of the newspaper page. This post will give some background and the best drawings from the article. One or two posts in the future will share the full text of the two articles. (Note that this article and its images are in the public domain because it was published before January 1, 1923.)

Getting back to the mini-boomlet of yoga, why was this article published in such a prominent newspaper on March 27, 1898 (on Easter Sunday, actually)? It goes back to the 1893 World’s Columbian Exposition in Chicago.

Among the myriad attractions in Chicago was a “World Parliament of Religions,” where dozens of religious officials and scholars gave lectures about their view of the divine. Swami Vivekananda (given name Narendranath Datta), a Hindu monk who had studied with Ramakrishna near Calcutta, was one of the speakers, and was a major attraction. He was a striking figure, usually dressed in vivid scarlet or orange robes, wearing a yellow turban. He was fluent in English, with a voice “as rich as a bronze bell.”  In a dozen lectures during the exposition, Vivekananda talked about the foundations of Hinduism and Yoga while maintaining respect for other viewpoints, something that won him points with the mostly Christian American audience. He was so popular, in fact, that when organizers noticed that scores of people would leave the hall after his speeches, thus leaving lots of empty seats for his successors, they moved him to the ends of the program so that other speakers wouldn’t be talking to a room of mostly empty seats.

After the conference, Vivekananda stayed in the U.S. for many months, going on lecture tours, and instructing students in philosophy, with notable assistance from Sarah Chapman Bull and Sarah Jane Farmer, who also were running lecture series and retreats at Green Acre in Maine and the Cambridge Conferences in the Boston area. His teaching in America inspired the foundation of the Vedanta Society of New York in 1894. And so, there were a number of students of Yoga in New York, and somehow they attracted the attention of the New York Herald.

A detailed account of Vivekananda’s time in the U.S. and his legacy is in The Subtle Body, and an abbreviated history is in the 2004 film Yoga Unveiled. Many of Vivekananda’s writings and lectures in English are in the public domain, with full text at Google Books, for example (if the link doesn’t work, put the following in the search box at Google Books:  inauthor:”Vivekananda (Swami)” ).

Here are the first four paragraphs from the March 27, 1898 article in the New York Herald:

Yoga is the latest diversion of New York society.  It is a scarcely a diversion, either. Rather should it be termed a religion. Yoga comes from the Orient and it suggests all sorts of mystic rites. Those who have perfected themselves in this Hindoo practice claim that it is the quintessence of bliss and happiness. But to acquire this state one must go through the most ridiculous performance ever attempted by sane man or woman. A Swami treats of it in a manner which cannot fail to interest you.

Ever on the watch for something diverting, that portion of New York society which dabbles in metaphysics — and you would be surprised to know what a large portion it is — has taken up a new fad. It is Yoga. Perhaps I should not refer to it as a fad, for Yoga is taken too seriously by its adherents to be spoken of in so flippant a manner.

Yoga is occult. It is mystic. It is redolent of Hindoo temples, centuries old. It is perfect peace. It makes you forget all your troubles. It is a glimpse of heaven It is everything that is lovely and charming, and, to use a colloquialism, it is not a pipe dream. Those who have experienced its delights say it is the genuine thing.

“What is Yoga?” I fancy you are asking. No layman could answer the question with any degree of satisfaction either to himself or the questioner. It would take a Swami to do that. My part of the story is merely to show how the Hindoo cult has captured New York society. But on the same page you may learn about its wonders from Swami Kripananda, who knows all about Yoga and has practised it, and who strips it bare of all its charlatanism.

In the next week or so, I’ll post the entire article.

Below are some of the drawings from the article (these are scans of microfilm of a newspaper published over 100 years ago, so the lackluster image quality is unavoidable).

Image credits:  The article and its images are in the public domain because they were published in the U.S. before January 1, 1923. If you are going to share them, I think it’s good form to always include an attribution to the New York Herald, March 27, 1898 so that those interested in the original source can track it down.