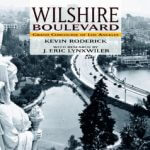 , by Kevin Roderick (with research by J. Eric Lynxwiler) has been on my list for many years and I finally read it last month.

On my handful of visits to Los Angeles, I have probably driven the  entire length of Wilshire Boulevard, covering a lot of the same territory and adding new bits and pieces on each trip. One evening during my most recent trip, I started near the western terminus at Rustic Canyon (the kitchen is currently run by the brilliant Jeremy Fox, who was formerly at Ubuntu in Napa), then drove east to see Michael Heizer’s Levitated Mass and Urban Light by Chris Burden outside of the Los Angeles County Museum of Art (LACMA)*. The next day, I happened to park underneath the building called One Wilshire (which actually has an address of 624 S Grand Avenue) before seeing the To Live and Dine in LA menu exhibit at the Central Library, enjoying some of the old buildings in downtown, and later having a great meal at BS Taqueria (beet torta!).

Wilshire Boulevard is one of Los Angeles’s primary streets, starting among the towers of downtown Los Angeles, eventually going through part of Beverly Hills, returning to Los Angeles, and ending up at the bluffs above the Pacific Ocean in Santa Monica. Wilshire wasn’t carefully planned to be like this. No group of planners sat in a room and said “we’ll put a major east-west street along this route from the city center to the ocean…” Instead, it grew as cities grew, absorbing whatever pre-existing road was convenient as it moved outward from its origin near Westlake Park (now called MacArthur Park). This growth pattern partly explains its highly irregular shape (another factor is the local topography, of course). The downtown street grid is tilted approximately 45 degrees from the N-S axis (to prevent the prevailing westerly winds from turning streets into wind tunnels). West of downtown it bends to be aligned with the N-S axis. This alignment continues through Beverly Hills. In Westwood and far west Los Angeles, the boulevard goes completely off-axis — probably to align with the topography and/or because it took over early roads from the Spanish and Mexican eras (see Curbed Los Angeles for more on LA’s grid). Finally, at San Vicente Boulevard, Wilshire connects to Santa Monica’s coast-aligned grid (originally Nevada Avenue), ending up in an orientation that is roughly 90 degrees rotated from the downtown orientation.  In other words, if you traveled the length of Wilshire from downtown to the ocean, your compass would initially read NW, switch to W at Hoover Street, vary between NW, W and SW around Westwood, and finally end up reading SW in Santa Monica.

The initial stretch of Wilshire Boulevard was the result of one man’s decision. Gaylord Wilshire had a good bit of land and decided that he wanted to build a wide thoroughfare that could be a promenade with grand houses on each side — and, of course, to make a lot of money. To this end, he deeded the land to the city with provisions that streetcars and trucks would not be allowed to use the street.

Roderick’s book begins with the street’s origin and traces the evolution of Wilshire into today’s hot-spot of commerce, culture, education and cuisine.  The book primarily moves from east to west, a direction that mostly corresponds with the chronological evolution of the boulevard (except for the western end in Santa Monica, which was an active street long before Wilshire made his grant).

With prose, vintage photographs — including what is claimed to be the first known photograph of the street — and vintage ephemera like postcards and advertising material, Roderick fills each chapter with detail after detail about the history of the people, buildings and businesses that populated the boulevard. He also keeps track of the larger cultural touchstones through each age, like its early days as a row of mansions owned by prominent Angelenos such as Harrison Gray Otis, the publisher of the Los Angeles Times (a large collection of photos of the grand houses — almost all demolished long ago — can be found at the Wilshire Boulevard Houses blog). Or its days as a shopping hub, when Bullock’s art deco department store was an anchor of a second downtown (notably, it was was built for the age of the automobile: its main entrance was in the back, facing a parking lot, with a curving driveway leading to an elegant porte cochere (carport) where attentive valets would take or return your car). Or the early days of Westwood Village, back when it was a quaint, human-scaled European-styled village, not the overcrowded urban canyon we see today, and when the location for UCLA was chosen to help sell real estate.**

A Detailed, Extravagantly-Illustrated Book without Any Maps

Reading Roderick’s book was an enjoyable experience and gave me a new understanding of the evolution of Los Angeles.  However, I often got lost in the numerous details about the notable buildings and people, and often ended up skimming a bit — some areas have or had so many important buildings that some paragraphs seemed like lists and it was hard to keep track of the who, what, where, why and when.   With so much detail, I often thought that this book could make an amazing multi-media experience (like a mobile phone app).  Or perhaps, a series of annotated maps or cards (like the San Francsico Bay Trail Maps)***.  With a little bit of work, you could make the book a DIY guidebook to explore Wilshire’s past and experience its present.

Despite the lavish illustrations, the book doesn’t contain any maps. None. Zero. Not even one. Had the book been one-hundred per cent text, that would make some sense from a cost standpoint, but in a book with scores of full-color photos and illustrations, how can the author not have any maps? I would have been interested to see how Wilshire grew — what did it look like in 1900, 1920, etc.? What streets did it absorb and when? I did some digging on my own to try and get answers, and future posts will present some historical maps that have helped satisfy my curiosity.

Despite the major flaw of going map-less, Roderick’s Wilshire Boulevard is essential reading for anyone who spends time on Wilshire Boulevard or has interest in Los Angeles’s history, architecture or urban development. I did not take careful notes on specific locations as I read the book, but I’m sure the my next extended visit to Los Angeles will have me looking at Wilshire Boulevard more carefully and with a better appreciation for its history.

Notes
* How long before Levitated Mass or Urban Light appears in a sci-fi or superhero movie or TV show? I can imagine Levitated Mass being thrown by a superhero at an invading alien spacecraft, or the streetlights in Urban Light used as fighting sticks or spears by super-strong heroes or villains. Or have they already appeared? Or does LACMA not allow its sculpture to be used in popular art?  In any case, are any sci-fi or superhero films or TV shows even set in Los Angeles anymore?  All I see seem to be set in fake cities but filmed in Vancouver (The Flash, Arrow), or set in San Francisco (they love to destroy the Golden Gate Bridge…) or New York (The Avengers).

** Richard Saul Wurman’s 1991 edition of Los Angeles Access contains this biting commentary about Westwood: “Westwood attracts property speculators as a stray dog collects fleas, and they have trashed what may once have been LA’s most charming village.  Banal apartment and office towers have turned Wilshire Blvd into a traffic-clogged canyon.  The Mediterranean-style shopping village, created by a single visionary developer 60 years ago, has been cheapened by a proliferation of undistinguished banks, shacks, and fast-food chains. Modestly-scaled houses on leafy side streets are giving way to filing cabinets of stunning mediocrity that strain at the zoning limits and erode the spirits of place.”

*** The Angels Walk LA self-guided walking tour information for Wilshire covers the stretch between Alvarado and Western.  Free downloads of maps and guides are available and if I remember correctly, there are signs along the street.