The skin of a lemon is such a cheery hue. I’m fortunate to have a mature lemon tree in my backyard, and so when I look out my office window, I can see a few lemons hanging on the tree, little yellow orbs amidst the green leaves, and they can brighten my mood.

For designers of fruit crate labels many decades ago, I’m sure the skin was a major inspiration. For example, in the Southern Cross label below, the designer put lemons into the sky to make a constellation. The Comet label, which I included in my second post about the History of Fruit Crate Labels is another example of a lemon becoming an astronomical object.  (My History of Fruit Crate Labels, Part 1 looks at the purpose and creation of fruit crate labels.)

The focus of this post is lemonade, so why look at the skin?  There is a good reason:  in my favorite lemonade recipe, the skin is the secret.

I follow the approach recommended by Cooks Illustrated in the late 1990s: instead of pressing lemon halves onto a juicer to extract the juice and then discarding the spent halves, the whole lemon is used. Thin slices of lemon are mashed with sugar to release the aromatic and flavorful oils from the peel while dissolving the sugar. This gives a far more complex flavor than standard lemonade.

The photo below shows one lemon after it has been sliced.  I cut the lemon in half, place it down on one of its flat sides to provide a solid cutting setup, and then slice thinly. The slices go into a bowl with the sugar. 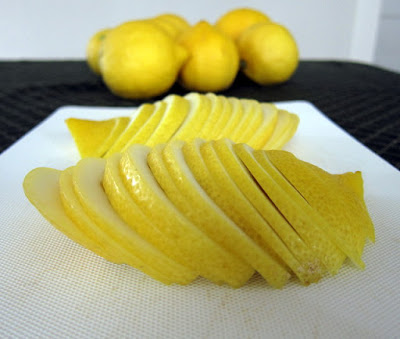 Measure the 5 cups of water into the pitcher or jar you plan to use for the lemonade in and place it in the refrigerator. For extra quick chilling, make your 5 cup measurement using a combination of water and ice cubes.

Wash and scrub the lemons very well to remove dirt and other garden residue. Slice each lemon in half length-wise, then cut into thin (1/8″, 3 mm) slices.

By hand: Put the sugar and lemon slices into a big bowl or saucepan that has a flat bottom and that you aren’t worried about damaging (e.g., don’t use a pristine Le Crueset or non-stick pot) Use a potato masher to mash the lemon-sugar mixture. Keep mashing until it looks like most of lemon segments are all broken (i.e., juiced).

Using a stand mixer: Put the sugar and lemon slices into the bowl of the stand mixer (Do not put any ice cubes into the mixture! See note below.). Attach the paddle. Drape a kitchen towel or piece of newspaper over the mixer to contain any splattering. Turn the mixer on its lowest setting, and let it run for a few minutes. Remove the bowl from the mixer stand.

Pour the water into the bowl and mix lightly by hand. Set a large strainer on top of a pitcher or mixing bowl (preferably one with a pouring spout). Pour the lemons and liquid into the strainer; scoop out whatever doesn’t pour. Let it drain for a few minutes, pressing lightly to release more juice. Transfer the liquid to the serving or storage pitcher.

Important note about using a stand mixer:  Although it is tempting to put ice cubes with the lemons and sugar to cool it down faster, do not do this! I tried it once and one of the cubes became stuck between the paddle and the mixing bowl, causing the mixer motor to make a hideous sound (and perhaps some internal damage).