When the locusts swarm, can we feed them to fish and poultry? 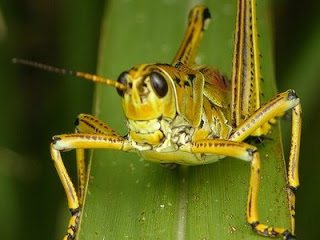 A few weeks before the Olympics started in Beijing, Northern China was hit by a enormous swarm of locusts that affected over 5,000 square miles of farmland and pasture. In response, the Chinese government deployed over thirty thousand workers and 200 tons of pesticide. This made me to wonder if instead of blasting the locusts with tons of poison (which will affect other creatures and ecosystems), could the locusts be captured and turned into food for farmed fish, poultry or other livestock?

Clearly, ‘harvesting’ locusts from a wide area presents major logistical problems. Could you use helicopters or ground vehicles to catch them? Or would it have to be done by hand? And the question of nutrient density would need to be answered. That is, for each unit of effort, how many units of nutrition can be collected? And how does that number compare to traditional animal feeds like corn, wheat, and fish meal?

While researching my first piece about insect eating, I ran across a study that had this to say about Mormon crickets in the American West:

Madsen also investigated the rate of return per unit of effort expended in collecting Mormon crickets (Anabrus simplex), another food of early Native Americans. Crickets were collected from bushes, grass, etc., at rates of 600 to 1,452 per hour, an average of nearly two and one-third pounds or, at 1,270 calories per pound, an average of 2,959 calories per hour. The crickets often reach greatest densities along the margins of streams or other bodies of water which lie in their line of march and which they will attempt to cross. In two such situations, they were collected at the rates of 5,652 and 9,876 per hour, an average of nearly 18 1/2 pounds of crickets or 23,479 calories per hour. The first number (2,959 calories per hour) surpasses the return rate from all local resources except small and large game animals, while the latter compares favorably even with deer and other large game.

Madsen places cricket collecting in a modem context by saying, “One person collecting crickets from the water margin for one hour, yielding eighteen and one-half pounds, therefore, accomplishes as much as one collecting 87 chili dogs, 49 slices of pizza, or 43 Big Macs.” He concludes, “Our findings thus showed that the use of insects as a food resource made a great deal of economic sense.”

The Food Insects Newsletter contains some news clippings from the Philippines about responses to locust outbreaks. After failing to control with locust outbreaks with toxic chemicals, the Philippine government tried to encourage people to harvest insects as food for people, cattle, farmed fish and even fighting roosters.

The next big questions are whether insects would provide the necessary nutrition for efficient fish or poultry raising and if they contain toxins that would injure or kill the fish or poultry. Not being trained in aquaculture or livestock raising, I haven’t read the classic textbooks and handbooks, nor do I know what sources of information are used in the industry, so I simply performed some searches of the biological databases at the UC Berkeley library. I didn’t find much, but what I find seems to indicate that the answer to the question of nutrition is “maybe.”

For example, in Animal Feed Science and Technology (volume 135, pp. 66–74, 2007), a trio of Chinese researchers examined the nutritional value of a Chinese grasshopper (Acrida cinerea (Thunberg)) as a feed for broilers (a class of chickens raised for meat). After analyzing the nutritional properties of the grasshopper and comparing it to a standard broiler diet, they concluded that about 15% of the standard diet could be replaced by grasshopper meal “without any adverse affects on broiler weight gain, feed intake, or gain:feed ratio from 8 to 20 days posthatching.”

Poultry Science (volume 66, pp. 1367-1371, 1987) contains an article by three researchers (including the legendary Professor Gene R. De Foliart (Emeritus) of the University of Wisconsin-Madison) that describes an experiment involving Mormon crickets (Anabrus simplex Haldeman) as a food for broiler chicks. They fed three groups of chicks different diets: corn and soybean meal (the National Research Council “standard” diet) and two diets with ground-up crickets making up part of the diet (unfortunately, my notes are rather incomplete — it was late in the day — so I can’t be more specific). The analysis indicated that although the cricket-based feeds were lacking in certain amino acids, the two cricket diets caused more weight gain for a given input of feed than the standard diet.

While a locust swarm could be a great feed source for a fish farmer or chicken raiser, they are probably too unpredictable. And so it could make more sense to try to raise insects specifically as fish and animal food (there are already many operations raising crickets and other insects as pet food) — “micro-livestock” or “mini-livestock.” Although I can’t find the reference at this moment, I have seen reports that some insects are far more efficient at converting plant matter into protein than mammals or birds. Of course, if mass rearing of insects ever takes off, it will be necessary to think carefully about their feed and living conditions — although I personally don’t have much concern about treating insects humanely, they may act as concentrators of toxins like heavy metals or become breeding grounds for pathogenic bacteria.

Photo of grasshopper from touterse’s flickr collection, subject to a Creative Commons License.