When “Emergency” Filmed in San Francisco

As a child, I sometimes watched the TV series “Emergency”, which ran from 1972 to 1979. Even though it featured crises and injuries that could easily happen to me or my friends or family, the show must have had some kind of attraction. Perhaps it was all of the heavy equipment or the explosions.

With the launch of Cozi TV and other channels that specialize in vintage television, “Emergency” has new life. While channel surfing one day, I happened upon an episode where the two main characters — paramedics John Gage and Roy DeSoto — pay a visit to San Francisco to see how the local firefighters and paramedics operate (the “Emergency” team was based in Los Angeles, the paramedics’ base seems to be around Marina del Rey, the fictional “Ramparts Hospital” appears in aerial shots but I don’t know Los Angeles well enough to place it). At the time I surfed to the Cozi TV channel, the emergency was a major fire on Pier 5 along the Embarcadero, just north of the Ferry Building.

Now I needed to watch the whole thing. Streaming services don’t have it, so I resorted to buying it on DVD in a package called “The Final Rescues.” It turns out that the San Francisco fire episode was part of a batch of made-for-TV movies after the series ended, not regular episodes, and that might explain why they don’t appear in steaming collections.

In “What’s a Nice Girl Like You Doing…?”, Gage and DeSoto ride along with local crews, observing or helping with rescues and injuries, like a worker on the Golden Gate Bridge who is injured above Fort Point when he falls (and is fortunately wearing a safety harness), or a visiting businessman who has a heart attack in a club with exotic dancers.

The episodes are highly unsatisfying: forced backstories (if you are dating one of the firefighters or paramedics, you will be caught up in a disaster); ignoring huge pieces of the story (e.g., letting the death of a governor in a plane crash happen without any reaction by local officials or the press in “Survival on Charter 220”); plodding and unexciting direction of the rescues and fires (somehow fighting a fire becomes dull); a lot of talk around policy and the law, e.g., the medical duties of paramedics, some of which is valuable, like the exploration of gender roles in this episode (one of the plot lines revolves around whether women should be paramedics, or if it is too dangerous. In the end, the women all perform superbly, putting to rest most concerns). Whatever the faults, though, you can’t deny that at times the show really brought the boom.

In this episode, like in many other episodes, poor housekeeping led to disaster. As a decommissioned old ship is being disassembled with cutting torches, loose sparks ignite a pile of oily rags below deck. The flames spread to nearby flammable liquids and soon it’s a full-blown conflagration. Unfortunately for the fire crews and those in the area, the pier was storing dozens of drums of flammable liquids and other hazardous chemicals (“enough to level half of San Francisco,” says one character).

The filmmakers did not hold back, setting sizeable fires on Pier 5 that created fireballs and turbulent plumes of black smoke. First, a shot from the air or a nearby building: 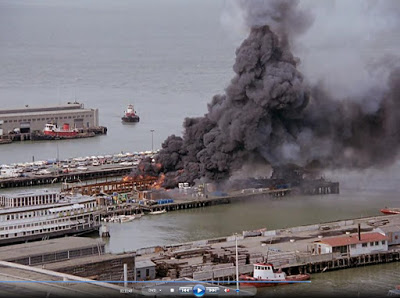 Here’s one of the explosions after the fire spread from the ship to the pier: 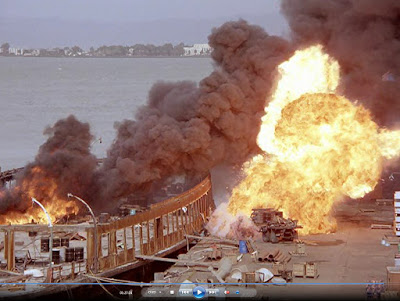 Next is a long shot of the fire — note the now-gone two-level Embarcadero Freeway between the City and the waterfront (For contrast, two pictures of post-freeway Embarcadero from Flickr: day and night). In the lower right you’ll find the northern edge of the Ferry Building. 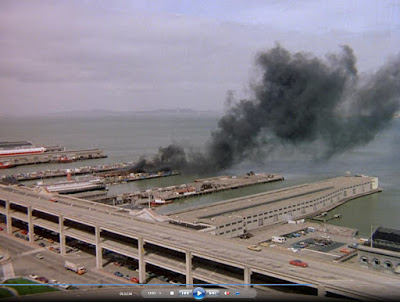 Some of the shots capture the disaster along with scenic views of San Francisco, like the next photo, which I annotated. In the background you’ll see the Ferry Building, One Market, a Hyatt hotel (the setting of key scenes in Mel Brooks’ High Anxiety; it also has spectacular Christmas lights in the atrium). There is also a 55 gallon drum flying into the air — I don’t know if that was intentional or accidental (there are several flying barrels during the fire sequence). Other shots have Treasure Island in the background (sometimes with a commuter ferry sailing by). 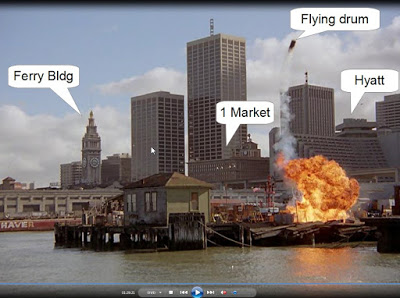 When I first saw the show on TV, I wondered if the local newspapers had any coverage of the filming. So I went digging in the newspaper archives at the San Francisco Public Library. After a painful search through bound indices made of paper (gasp!), I found an article in the San Francisco Chronicle from Saturday, March 11, 1978, page 8. This short piece, “An ‘Emergency’ on the Wharf” notes that the production company was cited for violating local air pollution rules. “It’s an illegal burn, no question about it,” said a spokesperson from the Bay Area Air Pollution Control District, noting that open burning is only allowed for a limited set of agricultural purposes. “Nothing in our regulations say you can burn to add reality to a TV show.”  (A still unanswered question: did the filming make it into Herb Caen’s column?)

Was the fine worth it? Could the Emergency team have effectively created high drama on the San Francisco waterfront without lighting huge (controlled) fires? I think the answer is yes: sticking with piers and ships, a structural collapse on a ship that trapped a few people in the hold could have been a dramatic situation that required calling out a variety of rescue crews without major fires.

In the second movie in the Final Rescues collection (“Survival on Charter 220”) a small private airplane clips the wing of a passenger jet, causing both to crash in Los Angeles. The pilot of the small plane and his passenger/lover/business partner had been fighting about money and infidelity during the flight — a bad idea — leading to a loss of concentration and thus a failure to see the charter jet. I think they even turned off the plane’s radio so their fight wouldn’t be interrupted by air traffic control. Another bad idea.

The jet crashes into a residential area in what looks like central Los Angeles. And as I said before, the Emergency team knew how to bring the boom:  huge explosions from buildings and aircraft wreckage.  Naturally, Gage and DeSoto are on call in the neighborhood when the plane crashes and are temporarily trapped inside an apartment.

Although the setting is generic medium- to low-density housing that covers much of central Los Angeles, in some shots there is a landmark in the background: a tall white building. I didn’t recognize it, and there are probably a dozen similar buildings in the Los Angeles area, but thanks to an internet coincidence, I learned its identity.

In March 2016, the KCRW Good Food blog had a post about a trio of women who are training for the Hollywood Half Marathon by designing training runs around the metropolis. Their runs have two key benefits:  varied scenery and a prominent restaurant destination. One of the runs was in Compton, with the food goal being Bludso’s BBQ. Along the way, they stopped at a Martin Luther King, Jr. Memorial in Compton. A photo of their visit shows a tall white building in the background — the building in the Emergency episode. It’s Compton City Hall (E. Compton Blvd near S. Willowbrook Ave.) and since the fire was on the opposite side of train tracks, I am guessing that the fire scenes were shot in a location that currently hosts a shopping center. This guess is confirmed by footage at 58:43, where a street sign makes it into a shot: LAUREL and LOWBROOK. The left side of the LOWBROOK sign is covered with black tape, probably covering up WIL.

Perhaps the fires were used to simultaneously earn some money for Compton, destroy buildings to make way for the shopping center, and provide live-fire training for local fire crews. Someday I might go digging into the Los Angeles newspaper archives to see if there was any coverage.  Perhaps the film crew was cited by the local air quality district like they were in San Francisco. Or, perhaps, the air quality district in Los Angeles issues permits for television- and film-related open burning. (Update:  the answer was in a Los Angeles Times article, as I explain in another post, TV as Demolition: When the TV Show “Emergency” Filmed in Compton.

Here are a few screenshots from the episode (starting at around 57 minutes).  The last one shows  Compton City Hall with the railroad crossing in the foreground. 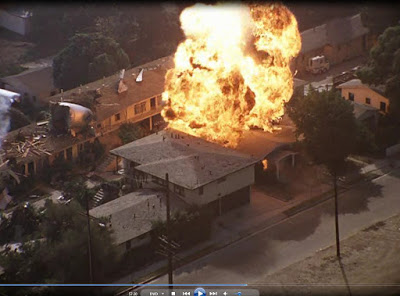 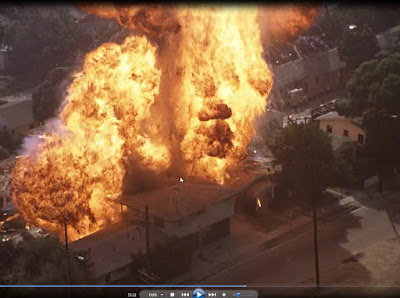 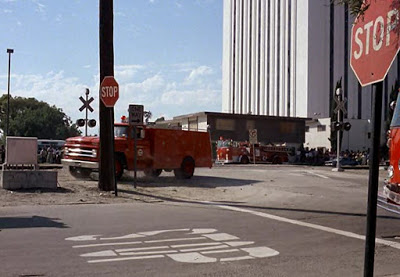