Fun with a Victorian Slang Dictionary 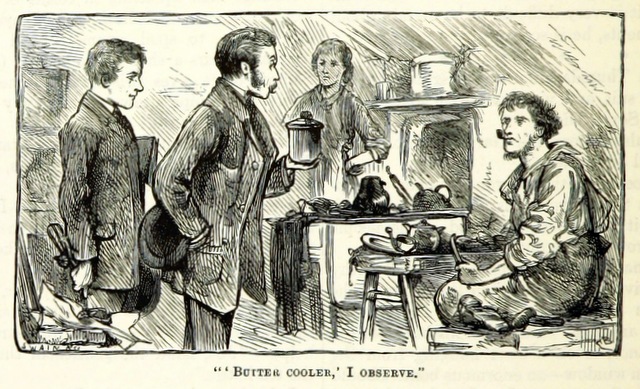 I was out walking the other day, and it was hot, so I was really feeling the collar. As I rounded the corner onto Kings Lane, I spotted my old crony George. And so I says to him, “I’m headed to the Lion’s Pub, why don’t you come and have a pickle?”

Once we got there, we ordered some steps, the house bags o’ mystery, and, against my better judgment, a few fourpenny cannons. Of course, pints of foot-rot were quickly acquired.

In 2016, much of the passage above might not make sense. And for good reason: it was sprinkled with slang from the Victorian era (late 19th century, early 20th century).

Here it is again, with some translation:

I was out walking the other day, and it was hot, so I was really feeling the collar (sweating as I walked). As I rounded the corner onto Kings Lane, I spotted my old crony (friend) George. And so I says to him, “I’m headed to the Lion’s Pub, why don’t you come and have a pickle (join me for a quick meal)?”

Once we got there, we ordered some steps (thick slices of buttered bread stacked on the plate to look like steps), the house bags o’ mystery (sausages), and, against my better judgment, a few fourpenny cannons (low-priced beef-steak puddings). Of course, pints of foot-rot (low quality ale) were quickly acquired.

These slang terms are all from a book published in 1909 called Passing English of the Victorian Era: A Dictionary of Heterodox English, Slang, and Phrase, which I learned about from The Public Domain Review’s Twitter feed (@publicdomainrev).

With several thousand entries, there are quite a few great bits of slang on all subjects.  Here some of my favorite food- and drink-related items from the book (these are all direct quotes, with the suspected origin of the term in parentheses): 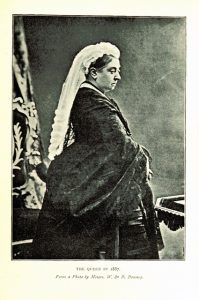 Fourpenny cannon (London Slums). Beef-steak pudding price, a groat. Named possibly from its shape, that of a cannon-ball (cut down to cannon), but possibly referring to the cast-iron character not only of the beef, but its integument.

Mops and brooms (Peoples’). Drunk probably suggested by the hair getting disordered and like a mop. From a time when hair was worn long.  ‘ Mops and brooms ‘ doubtless express a sense of confusion. Daily News.

Copper-rattle (Navy) . Irish, generally Irish, or other stew from the hubble-bubble of this boiling delicacy called in London city restaurants, ‘French Pie’. 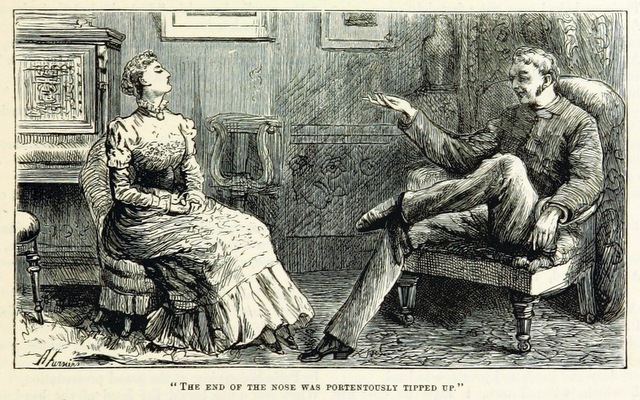 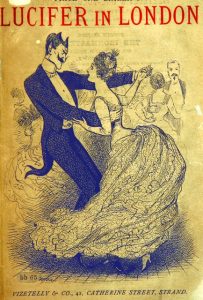 Spotted dog (Street Boys’). Plain plum-pudding spotted dough. The dog here is one of the pronunciations of dough the ‘h’ being removed and the ‘ g ‘ made hard.

Stir-about (Peoples’}. Pudding or porridge made by stirring the ingredients generally oatmeal or wheat- flour when cooking. (See Hasty pudding and Turn-roundpudding.)

Liqueur of four ale (City, satirical). Precisely as the common folk make fun of cheap food and give it impressive titles such as calling sheep’s head broth turtle soup ; so middle – class young city men chaff their drinks. The most expensive liqueur, green Chartreuse would be eighteenpence while four ale (City sherry) is the cheapest. Phrase really means, *a glass of bitter’ beer understood.

Clove-hunters (Amer.- Eng.} Frequent nip-drinkers, especially between the acts of a play, when the nibbled clove vainly sought to hide the higher perfume of the alcohol. Came to be used (1884) for the refreshment itself.

Butter upon Bacon (Household English). Extravagance resulting out of the condemnation of eating bread and butter with bacon, instead of the plain loaf. ‘ What are you going to put lace over the feather isn’t that rather butter upon bacon ? ‘

Call it 8 Bells (Nautical). Early drink. It is not etiquette in good nautical circles to have a drink before high noon ; 8 Bells. So the apology for alcoholics before that hour takes this form : ‘Come along I fancy the bar is this way. Call it 8 Bells.’ And they do.

Beer and Skittles (Peoples’). A synonym for pleasure; e.g., ‘Ah, Joe, if a bloke’s life was all beer and skittles we shouldn’t be doing time.’   [Example:]  But life on a yacht is not all beer and skittles, nor is it always afternoon. There is the dreadful morning time, when the crew begin to stir on deck, and earthquake and chaos seem to have come. D. N., 22nd August 1885.

Beerage (Soc., 19 cent. ). A satirical rendering of peerage, referring to the brewery lords, chiefly of the great houses of Allsopp and of Guinness.   [Example:] Dr Edwards as a temperance worker had some very strong things to say a few months ago on the subject of the ennoblement of rich brewers. Of course he opposed it on moral grounds, but some of the old nobility would be inclined to agree with his denunciation of the ‘beerage’ for other reasons (Newsp. Cutting.)

And a few other good ones that aren’t related to food or drink: