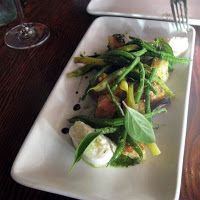 Update 3/8/17:  Ubuntu closed in late 2011.  Details about the fates of the two chefs who led the kitchen (Jeremy Fox and Aaron London) are at the bottom of the post.

Although the S.F. Bay Area is close to being a vegetarian paradise — with its glorious bounty of vegetables, fruits and cheeses, and vegetarian items on almost every restaurant menu — I’m often disappointed with my restaurant experiences. Perhaps it’s a lack of interest in vegetarian cooking in restaurant kitchens, or possibly the financial realities of running a restaurant, or maybe even the tyranny of Alice Waters, but it seems that most places offer vegetarian options that are generally well executed but usually not very interesting — like a risotto with seasonal vegetables and classic flavorings, pasta with seasonal vegetables and classic flavorings, or something along those lines.

Not so with Ubuntu in downtown Napa.

While generally following Northern California’s focus on local and seasonal, the kitchen staff manages to create amazing and innovative combinations. Or, they explore a single ingredient, like cauliflower, presenting it in roasted, pureed and “couscous” form (i.e., the tiny florets around the edge of the vegetable) in the same dish. 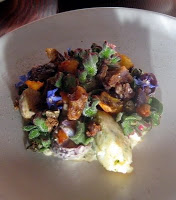 On a visit in September, my companions and I shared olives marinated in carrot top puree; panzanella with grilled peaches, peach leaf and basil oil, green beans, and burrata (pictured above); the famous cauliflower in a cast iron pot; a potato salad (pictured at right) consisting of quenelles of smoked potato, roasted blue potato, crisp fried potato slices, borage flowers, and ficoïde glaciale (a type of ice plant that I’ll describe below); and polenta with 3-day sofrito, padron peppers. The potato salad contained a variety of contrasting and complementing flavors and was also an experiment in texture, bringing silky, crispy, sour, smoky and crunchy.

Dessert is not to be missed. Our first choice was the justly lauded cheesecake in a jar. The layers of a rich, slightly tart creamy base with fruit and a crunchy topping provided plenty of pleasure. Our second dessert that night consisted of dollops of rich chocolate ganache, roasted figs, coffee-chicory ice cream, and a disk of crispy chocolate. This disk was something between a cookie and a piece of chocolate, not like anything I’ve had before.

In this excellent meal, one ingredient stood out: ficoïde glaciale, a succulent that has somewhat of a following in France. Ubuntu grows their own in their biodynamic gardens (ingredients grown in Ubuntu garden are highlighted on the menu). Ficoïde glaciale is crunchy, slightly sour, a bit salty and full of moisture. Unfortunately, I forget what the crystals covered with salty crystals tasted or felt like. Pim has a good photo of young plant growing in the Manresa restaurant garden.

Living in California for a long time, I’m quite familiar with another kind of ice plant, an imported succulent that sprawls across coastal dunes and alongside freeways, choking out native plants and creating biological deserts (and also, I must admit, displaying gorgeous magenta flowers which add to the beauty of the Californai coast). This plant, sometimes called the “freeway ice plant,” is probably Carpobrotus edulis, and apparently both the fruit and vegetation are edible. I don’t plan on trying it, and if you think about taking a bite of the freeway ice plant, it’s probably a good idea to double-check that it is edible before doing so.

Novel November
I went back to Ubuntu a few weeks ago. For a starter, I had a piece of burrata with wild fennel crackers and 3 slow-cooked condiments: caramelized fennel (with chunks of lightly-cooked fennel), a remarkable green tomato marmalade, and stewed greens (chard and mustard). For a main course I considered the carrot: homemade carrot gnocchetti with tarragon and mimolette cheese, topped with carrot pulp and a spiced “crumble” of freeze-dried carrot, almond and mace.

For dessert, I chose the rice pudding (which also happened to be vegan). On a large plate, the pastry department placed two scoops of the pudding, a cylinder of fuyu persimmon sorbet, some slices of fuyu persimmon, a few dabs of date puree, and a few translucent jellies. It was a stunning presentation, a far cry from much of the Bay Area’s dessert offerings of a one-dimensional creme brulee or fruit crisp. And it was delicious: the rich pudding screamed ‘coconut’, the persimmon sorbet was subtle and lightly acidic, the date puree a new way to experience that fruit. The jellies were beautiful, but I found them to be somewhat flavorless (they were intended to be rum-flavored).

Also on the menu that night was fregola (pearl-shaped pasta) with quenelles of sweet onion and leek ash; local grits smoked with hickory, fried brussels sprouts, kohlrabi and lemon, and apple bbq sauce; and a pizza topped with house-made sauerkraut, vegetarian boudin noir sausage and an egg (the S.F. Chronicle printed Jeremy Fox’s recipe for vegetarian boudin noir sausage, but since I didn’t have it at the restaurant I don’t know if it is the same).

Not everything at Ubuntu is perfect, of course. Service on my first visit was substandard. The polenta with sofrito in September was somewhat pedestrian. The crepes in a dessert on my first visit were cool and rubbery (but accompanied by a divine bay laurel ice cream).

I hope that Ubuntu has a long run, never rests on its laurels as the “go to vegetarian restaurant” in the wine country, and inspires other chefs to be more daring with their vegetarian offerings. [Update, 3/8/17:  Extremely Ron Howard voice:  “It didn’t.”]

Ubuntu closed in late 2011. Opening chef Jeremy Fox bounced around for a little while and eventually settled in at Rustic Canyon in Santa Monica, California and is receiving excellent reviews. Fox has also been writing a cookbook for Phaidon called On Vegetables that hit the stores on April 17, 2017.  He has received significant media coverage in April 2017 because of the release of the book and his James Beard nomination — for example, at NPR in ‘Vegetable Whisperer’ Chef Plants The Seeds Of His Own Reinvention.

Ubuntu’s second chef, Aaron London, opened AL’s Place in San Francisco’s Mission District and has received positive reviews and press, including a spot on Bon Appétit’s top 10 best new U.S. restaurants for 2014-2015 and a spot on the San Francisco Chronicle’s Top 100 List in 2016.