After the jump, short reviews of A History of the World in Six Glasses, by Tom Standage and Jack Turner’s Spice: The History of a Temptation.

Pour Me a Glass

I don’t remember when I first heard about A History of the World in Six Glasses, by Tom Standage, but I remember that I was skeptical. How could a book about six drinks — beer, wine, tea, coffee, spirits and Coca-Cola — have anything significant to say about world history? How could those drinks change the course of human events? I changed my mind when I heard Mr. Standage on the KCRW Good Food radio program (the July 16, 2005 episode). Beer, it turns out, was a fuel that powered the ancient Egyptian labor force. Being a pathogen-free source of hydration as well as a source of carbohydrates and some vitamins, it helped build one of humanity’s greatest civilizations. Wine led to the creation of international trading networks. The coffeehouses of 17th century England were dynamic markets of ideas and innovation (Lloyd’s of London, for example, started in a coffeehouse). Tea helped make possible the industrial revolution in England (before tea arrived, workers would start the day with a glass of weak beer) and later caused the Opium Wars with China. Spirits (especially rum) were a critical part of the slave trade (slaves would harvest and process sugar in the West Indies, the molasses would be brought to New England and converted into rum, the rum would be used as currency to buy more slaves in Africa). These examples are just a few of world-changing events that Mr. Standage connects to the six drinks.

The Coca-Cola chapter, however, is the weakest and least important. Sure, Coca-Cola is one of the most well known brands around the world and is a symbol of globalization, but I don’t see how its existence changed the world. Unlike tea, which is a way to safely drink water and also has caffeine, or spirits, which are highly portable and valuable forms of grain or sugar, Coca-Cola does not have similar unique qualities. Except perhaps its high sugar content and complete lack of nutritional value — but that is a story unfolding over the next few decades in the coming obesity and diabetes crises.

I highly recommend this book. If you don’t have the time for the book, check out the Good Food interview (linked to above). 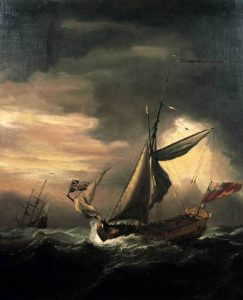 Jack Turner’s Spice: The History of a Temptation starts out with a spellbinding tale of the daring explorers from Europe who traveled across unforgiving seas to unknown lands. The goal of much of this exploration was spices, the exotic products that were critical in the kitchen, the hospital, the church and just about anywhere. In a quest for spices — or more precisely, a quest to cut out the Muslim and other non-Christian middlemen — Portugual sent ships to the East. The initial contact with the rulers of the Malabar Coast somewhat shocked the Portuguese. Instead of finding a primitive subsistence society, they found a sophisticated and wealthy empire that had been trading across oceans for centuries (with the Roman empire, for example). However, the empire did not have guns or cannons, and so the Portuguese were able to ‘negotiate’ a lopsided trade treaty and gain control of the critical spice trading cities.

…each of which is barely larger than a speck on the best modern map. Needless to say, no such maps existed in 1500. To locate them among the sixteen thousand or so islands of the archipelago was to find a needle in a haystack.

The northernmost of these specks is the home of the clove, in what is today the province of Maluku, in the easternmost extremity of Indonesia. Each of the five islands of the North Moluccas is little more than a volcanic cone jutting from the water, fringed by a thin strip of habitable island….Ternate, one of the two principal islands, measures little more than six and a half miles across, tapering at the center to a point more than a mile high…A mile across the water stands Tidore, Ternate’s twin and historic rival…Together they represent a few dozen square miles in millions of miles of islands and ocean. At the start of the sixteenth century and for millennia beforehand, they were the source of each and every clove consumed on Earth.

The story of how clove trees were spread beyond the two islands is a great one, with international intrigue and danger.  (To see where Ternate Island lies, check out this Google satellite image.)

There are many other revelations, like the extent of the trading networks between the Roman Empire, Arabs, India and the spice lands. But after a few chapters — right around the Medieval period — the book slowed down to a crawl, and became much less interesting to me. If you are fascinated in dining habits in the Middle Ages, of course, you might think otherwise.

Bonus spice link:   A look at a clove packers in Bali at Eating Asia

Image Credits
Photo of Kerala tea plantation by nibujohn, from the morgueFile.   Shipping in Heavy Seas by Willem van de Velde the Younger from the Web Gallery of Art.