The first is clafoutis;, a dessert of fruit embedded in a custard, a dessert I make a few times during the cherry and apricot season in the spring. Although it can be adapted to fall fruit like apples and pears, I haven’t tried those variations. The second is torta verde, a savory pie from the Liguria region of Italy. In this torta, a thin olive oil crust holds a mixture of Swiss chard, feta cheese, onion, potato and eggs.  I probably make it once a month, all year round, especially before long domestic flights because it is superbly portable and has robust flavors that stand up to taste-killing aircraft cabins.The torta was born out of necessity, according to the Saveur article. Its home region — the rural areas of Liguria north of the Italian Riviera (like the town of Triora) — is a place where wheat flour has historically been quite expensive. And so the torta, with its thin crust enclosing a wealth of vegetables and cheese, was created so families could stretch their flour budget. Although this torta uses Swiss chard as the green, I’m sure that tortas are made with wild greens foraged from the countryside, various thinnings from the garden, and so on.  Like all pies, there are countless filling possibilities (I include two variations in the recipe notes, as well as a reference to another variation) .

Here are a few notes about making the torta that I have learned over the years: 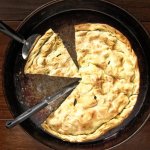 Roll the Crust and Fill the Torta