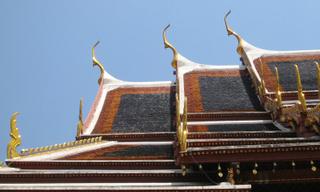 Some of my favorite architectural features of Thai buildings are the creatures on the roofline: birds and serpents that guard boundaries of the sacred structures. The chofas (sometimes spelled chofah, cho fa, or cho fah) are bird guardians and live on the peaks of each gable. In areas with many religious buildings, like the Wat Phra Kaew complex or the Wat Pho complex, the elegant silouettes of the chofas are everywhere, gleaming in the smog- and humidity-filtered Bangkok sun. Unlike much Thai art and ornamentation, which can be distractingly ornate, the chofa is a simple, yet sublime, object. The shape of a bird is suggested with the minimum of detail.

The Arts of Thailand, by Steve Van Beek and Luca Invernizzi Tettoni, gives the following definition of chofa: “variously translated as ‘bunch of sky’ or ‘tassel of sky’, the slender finial like a stylized bird’s head graces either end of a roof peak of a bot [the monks’ congregation hall] or vihan [worship hall]. It is thought to signify the garuda and may originally have been intended to render Buddhism more appealing to Vishnuites, the garuda being Vishnu’s mount.” (p. 241)

In some buildings, the chofa “grasps two nagas [serpents] in its claws…”, with the nagas sloping down the edge of the roof. The chofa has significant import ance, and some buildings are not considered consecrated until chofas have been fixed in place.

The naga is a snake, sometimes with many heads, and one particular naga (the serpent king Muchilinda) played an important part of the Buddha’s path to enlightenment (photo of a sculpture). Ornate and fierce-looking snakes are on the sloping edge of many roofs in Thailand as part of the protection around the holy site. Visit Khandro.net for much more about nagas. 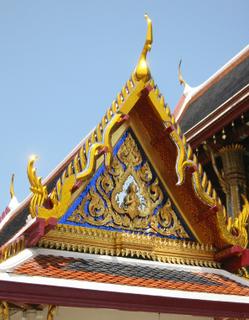 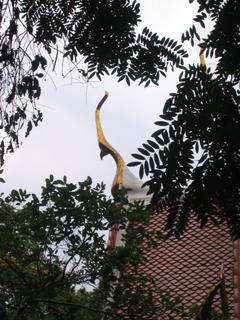