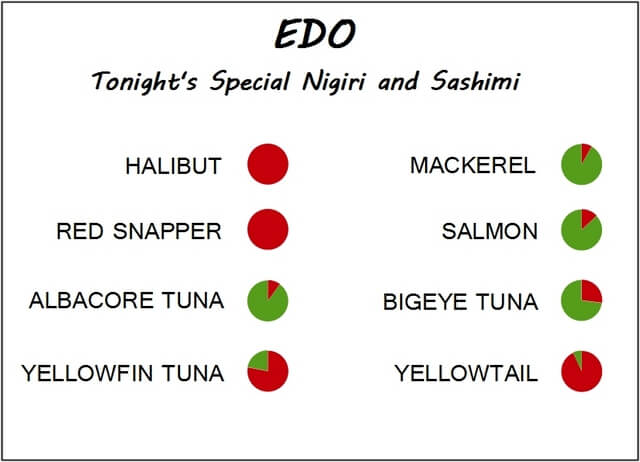 You’ve just arrived at your favorite sushi restaurant, Edo, and the greeter takes you to your table and gives you the menu and a sheet with the nightly specials. The specials menu looks different. Instead of what you’re used to — a list of fish that are featured that night — there are also little red and green symbols that look like pie charts. When your server stops by, you ask “What are these symbols?”

“Those are our confidence ratings for each fish,” she replies, “The more green in the symbol, the more likely that the fish we serve matches what’s on the menu.”

A recently released research study collected fish samples from sushi restaurants in Los Angeles, then ran them through DNA analysis to find their true identity. They found that 47% of the samples were mislabeled, with some of the fish mislabeled 100% of the time.  My mock menu above shows results for 8 of the fish, with the green/red split indicating the probability of correct or incorrect labeling.

The Hazards of Mislabeling

Mislabeling is a serious issue for several reasons:

Students Dining on Sushi for Science

Over the course of four years, the team — which included students in an undergraduate course (Introduction to Marine Science Laboratory) — collected 364 fish samples from 26 sushi restaurants in Los Angeles that had been rated high or good on two on-line rating services. Sixty-nine percent of the restaurants were sampled 2 or more years so the researchers could confirm if mislabeling was long-term issue (it was).

The team chose nine popular fish: albacore tuna, yellowfin tuna, bigeye tuna, bluefin tuna, red snapper, yellowtail, halibut, mackerel, and salmon. They also sometimes ordered fish labeled only as “tuna” when it was on the menu.  (The complete list with Latin names for each is in the note below.)

At each restaurant, team members placed their order, confirmed the identity with servers, then cut off a small sample to bring to the lab for analysis. Using DNA barcoding, 323 of the 364 samples were successfully analyzed to obtain a species identification.

Forty-seven percent of the items were mislabeled.

Each fish was mislabeled at least once, with some fish always mislabeled, except for bluefin tuna (which you shouldn’t be eating anyway, because it’s Seafood Watch Avoid fish, in part because we are fishing it to the edge of extinction).  The most reliable fish were salmon (only 13% mislabeled), mackerel (8%), albacore tuna (< 10%) and ‘tuna’ (less than 10% of samples weren’t a tuna species).  Slightly less off-target was bigeye tuna with 25% mislabeling.  At the inaccurate end of the scale were yellowfin tuna (78% mislabeled), yellowtail (93%), halibut (100%) and red snapper (100%).  They found that mislabeling was frequently repeated year after year:  if a fish was mislabeled one year, there was a 61% chance that it would be mislabeled later.

Unfortunately, the study’s scope was limited to analyzing fish served at restaurants, and so the team wasn’t able to answer these big questions:  “Where in the supply chain does the mislabeling happen?” and “Did the sushi restaurant intentionally mislabel the fish?”   For much of the seafood served in sushi restaurants, it’s a long supply chain:  fishing boat(s) far offshore, shore-side purchasers, import-export companies, regional wholesalers, local distributors, and finally the restaurant staff.   Each step in the chain offers a possibility for intentional or unintentional mislabeling. The authors suggest that a promising follow-up would be to work with sushi restaurants to compare their wholesale receipts with the menu labels. In other words, are they getting what they asked for? (Another good idea would be to work with regional distributors to see if they are getting what they ask for.)

Other unfortunate — but less reasonable — omissions are related to economics.  First, do higher priced restaurants have better reliability?  Will a $$$$ restaurant have more accurate labeling than a $$$ or $$ restaurant? Second, do more expensive items have more accurate labels?  The answers to these questions might help infer if the mislabeling happened at the restaurant or somewhere up the supply chain — lower priced restaurants might have more incentive to substitute high-priced yellowfin tuna with lower-priced albacore at a low price to improve their prestige rating and attractiveness.  (This theory, however, is contradicted by the absence of bluefin tuna mislabeling.)

With today’s complex international seafood market, underfunded inspection agencies, the challenge of telling similar-looking fish apart, and restaurants struggling with high costs, there will be plenty of opportunities for future work on seafood mislabeling.  Until some future when there is perfect labeling, today’s sushi eaters need to think “buyer beware.”

In the second part of this series I’ll be looking at four of the fish in more detail and share the researchers recommendations (and some of my own) for reducing seafood mislabeling.