Many of us have old recipes that we love to cook — perhaps they have been passed down through the generations on index cards, or are from old community cookbooks with frayed corners and well-worn covers.  But few are as old as this post’s recipe for carrots simmered with cumin, mint and vinegar.

This recipe is really old:  it’s derived from a book written more than 1,700 years ago, around the days of Caesar, Augustus, and Tiberius.

In fact, it was the recipe’s age that first attracted my attention as I was browsing through Deborah Madison’s The Savory Way. I’m not usually a big fan of carrots, but after I tried it once, it was on its way to becoming one of my kitchen standards. The background of cumin and mint, a hint of sourness from vinegar, and the sweetness of the carrots meld into something delicious. And knowing that it might have been enjoyed by Caesar, Cicero, Augustus, Livia, and other Romans makes it even more exciting.

In her recipe notes, Madison wrote that the recipe “derives from chronicles of Ancient Rome.” Looking at her bibliography, I guessed that Madison’s likely inspiration was a book called Ancient Roman Feasts and Recipes by Jon and Julia Solomon (1977). That book led me to an ancient text by someone named Apicius.  So I looked it up and found an interesting story.

Who Was Apicius? And What Do We Know about His Book?

When food historians say “Apicius,” they are almost certainly referring to De Re Coquinaria (On the Subject of Cooking), the most complete manuscript about food from the Imperial Roman era, with notes on almost 500 dishes. Although other ancient works have bits about cooking — a treatise on agriculture, for example, has some recipes — none have the breadth of De Re Coquinaria (which I will call “Apicius” for the remainder of the post).

Joseph Vehling (the first to translate Apicius into English)1 argues that the manuscript originated from old Greek works about cookery and medicinal by several authors. As Rome eclipsed Greece, they were adopted and adapted by Romans over the years2.  What survived the centuries might have been a small part of a standard reference book that was originally much more comprehensive, with sections on medicinal uses of food, for example.

We know of two prominent men named Apicius who could be the namesake of the book: a Marcus Apicius who lived around 100 BCE (during the Republic), and the more likely candidate Marcus Gabius Apicius, who lived during the reigns of the emperors Augustus (27 BCE – 14 CE) and Tiberius (14 CE – 37 CE). The second Apicius was a legendary gourmet, with ancient books telling of his exploits (like spontaneous trip across the Mediterranean to purchase some famous shellfish) and death (committing suicide when he realized that his financial resources were far too meager to support his lavish diet, a story that is probably not true).

Somehow, long after the end of the Western Roman Empire, the name Apicius was connected to the manuscript in honor of his gastronomic fame.

For an entertaining fictional view of Apicius’s life, I recommend reading Crystal King’s 2017 novel Feast of Sorrows, which tells the story of Apicius, from the viewpoint of one of the people he enslaved, Thrasius — an exceptionally talented cook. Apicius’s wants to be the culinary advisor to the emperor. Purchasing a top-notch kitchen staff, collecting great ingredients from across the empire, and throwing lavish parties is how he hopes to secure the position.

Not Quite a Cookbook

To modern eyes, Apicius is not a “cookbook” because it rarely has quantities or detailed instructions. Instead, it’s more like an ‘inspiration book’ or quick reference guide — ingredient groupings for particular dishes that would be useful in the hands of a skilled and experienced cook. For example, an enslaved person who cooked in household kitchens for many years would likely know the relative quantities of herbs and spices, when to add each one, the cooking times, and so on.

To address Apicius’s vagueness, there are a number of books for today’s cook that supply quantities, timing, and replacements for hard to find ingredients3. The above referenced book by the Solomons is one example, as is A Taste of Ancient Rome by Ilaria Gozzini Giacosa (1992) (which inspired my posts about tossing shells on the floor and bringing your own napkin to banquets for leftovers).

What does Apicius tell us about ancient Roman food?

The carrot recipe in this post shares a few of the above characteristics, but is relatively restrained in its use of herbs and spices, and also doesn’t use fish sauce.  The original ‘recipes’ for the dish5 have many more flavorings:

The carrots are boiled and sliced, stewed with cumin and a little oil, and are served. At the same time, make a cumin sauce for those who have the colic.

The recipe in this post has cumin, fresh mint, vinegar, and pepper, while the original cumin sauce adds lovage, parsley, and honey, and uses dry instead of fresh mint. The original also calls for “broth,” which could be any number of things.  My guess would be that the broth was garum based:  perhaps garum diluted with water or wine.

Whatever this recipe’s history, it’s a less common approach to carrots that you should try. Preparation takes only as long as you need to peel and cut a few carrots and grab a few bottles from your pantry.  And once the carrots are simmering, there’s not much to do.  If you want to watch Gladiator, Spartacus, Demetrius and the Gladiators, or any of Hollywood’s Roman epics (“Sword and Sandals” films) during or after you enjoy these carrots, that’s up to you… 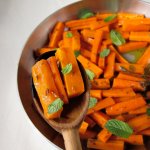 A simple and delicious side dish that might have been served in Ancient Rome.

Adapted from The Savory Way, by Deborah Madison. Her recipe is probably based on one in De Re Coquinaria (On the Subject of Cooking), (a.k.a. “Apicius”), the most complete manuscript about food from the Imperial Roman era.

Ancient Romans didn’t use the black pepper that we use today (Piper nigrum), but instead most commonly used used “long pepper” (Piper longum), which can be found at specialty spice shops.  An article at Leite’s Culinaria has more details on ancient Roman ingredients.

Portrait of Julius Caesar by Johann Friedrich Leonard, after Peter Paul Rubens, in collection of the Rijksmuseum, the Netherlands, via CC Search, CC0 1.0