These days, kale’s most iconic role is in kale salad — one of this era’s hottest salad trends (though they were also making kale salads 100 years ago). Massaged with salt, dressed with a sharp dressing, tossed with all manner of vegetables, nuts, and other tasty items, it is often delicious and nearly always healthy (kale might even be a superfood).

But on a chilly autumn or winter night, you want something warming, something hearty and nourishing. Something like a bowl of soup. Something like a soup with kale, beans, a touch of warm spices, and perhaps some toasted bread at the bottom of the bowl.

With a thick broth, plump beans, and pleasingly bitter kale, this is one of my favorite soups. And it’s probably one of the most nutritious dishes that I make, full of healthy ingredients like beans and kale, light on fat, heavy on fiber. I first discovered the combination of ingredients in a recipe called “Tuscan Kale and Bread Soup” in Paula Wolfert’s excellent Mediterranean Grains and Greens.

A first glance at the recipe looks like a fairly standard vegetable soup: onions and garlic — check; a bunch of vegetables — check; some legumes — check. But what’s this? What are small pinches of cinnamon, clove and nutmeg doing in my vegetable soup? They are a reminder of Tuscany’s proximity to the spice trade  and North Africa, and they bring some exotic flavors and high notes to the soup.

If you are in a hurry, a can or two of white beans works fine, but you’ll be happier if you can cook your own beans (this could be done a few days ahead). With fresh-cooked beans, the beans can be deeply flavored with rosemary and bay leaf while they cook, and the liquid — a.k.a. “bean liquor” — is delicious and will bring body and flavor to the soup (unlike that mysterious goo in cans of beans).

The ideal kale for this soup is one of the more recently popular “Tuscan kale” varieties, which go by names of lacinato, black, cavolo nero, and dinosaur. Like many other ‘new’ vegetables, it’s actually an old heirloom variety: Elizabeth Schneider, in her indispensable Vegetables from Amaranth to Zucchini writes that it was developed in Tuscany, probably in the 18th century.

Although I haven’t tried making the soup with curly kale, I expect that it would be fine, though you might need to cut back on the kale a bit because, according to Schneider, curly kale leaves don’t lose much volume during cooking.

As I was researching this post, I ran across some interesting historical kale-related items:

In her book, Wolfert calls this “Tuscan Bread and Kale Soup,” with the bread part referring to the serving method:  rub a piece of toasted or grilled country bread with a clove of garlic, place it in the bottom of the bowl, then ladle the soup on top. The broth breaks down the bread, further enriching the soup, and bringing some new flavors (the darkest parts of the crust offer especially interesting flavors).  I typically don’t follow the bread in bowl instruction, but instead toast a piece of country bread, then cut or tear the crust into pieces and put them into the soup to soften. 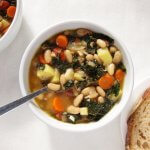 With a thick broth, plump beans, and pleasingly bitter kale, this Tuscan classic is one of my favorite soups. And it’s probably one of the most nutritious dishes that I make, full of healthy ingredients like beans and kale, light on fat, heavy on fiber.

The preparation time for the soup depends on whether you use dry or canned beans.  The cook time below is for canned beans because the cooking time for dry beans is so unpredictable.

Prepare the beans (if not using canned beans)

Adapted from a recipe in Paula Wolfert’s excellent Mediterranean Grains and Greens.

This recipe works best with varieties in the Tuscan kale group (lacinato, black, cavolo nero, dinosaur). Curly kale should be fine, but needs to be cut into smaller pieces and cook for a longer time.