A Rare Sighting of cooked Cucumbers 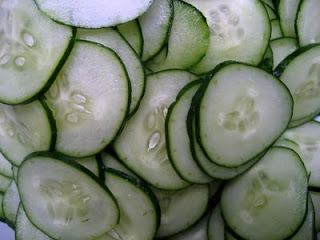 Cucumbers are one of those vegetables — like lettuce — that are almost never heated. And so, when I ran across a recipe that calls for sauteing cucumbers in oil, I had to give it a try.

The recipe is in New Salads: Quick Healthy Recipes from Japan, a thin book that contains a wide variety of Japanese approaches to salad making. Although only 124 pages, it is packed with useful background information to go with the recipes, like diagrams of how to cut vegetables, explanations of the ingredients and techniques of Japanese cooking, and much more. Following chapters titled “Beautiful Salads” and “Healthy Salads,” the author presents “Simple Salads” organized by the main vegetable ingredient.

The recipe was designed for Japanese cucumbers, which have thin, edible skins and minimal seediness, but I imagine that other varieties with similar characteristics could work also, like English cucumbers and perhaps even the pale green Armenian varieties.  In my mind, the finished recipe is a side dish that serves the purpose of a small bowl of Japanese pickles as a meal enhancer rather than a full-fledged salad or side dish.