Port Size Perspective: How Big are the Ports of Long Beach and Los Angeles?

In my review of The Box, I noted that containerization required ports to cover much more ground to support cranes, container storage, roadways, and so forth. To illustrate the size of major modern ports, let’s take a look at the Ports of LA and Long Beach. These are the two largest ports in the United States, handling approximately 6.8 million TEU at Long Beach and 8.3 million TEU at Los Angeles in 2015. (TEU is the standard benchmark in the container port world, and stands for twenty-foot equivalent unit, which represents a container that is twenty-feet long.  A thirty foot container, therefore, would be 1.5 TEU.)

I have driven around the port areas a few times (once even getting lost on the peninsula west of downtown Long Beach and almost getting stuck in a lengthy line of trucks waiting to get into the port).  The port complexes seemed endless:  crane after crane, vast expanses of stacked containers, roads going every which way, scores of trucks.  But how would the ports’ size compare to well-known geographies?

One way to check would be to draw an outline around the ports on a map, then drop that outline onto a map of a well-known place.

The first map below shows my rough outline of the ports’ boundaries on a map from the U. S. Geological Service’s National Map project. The word rough should be emphasized, since I don’t know the exact boundaries of the ports and it’s possible that there are other entities that own some of the land. Nonetheless, it’s a good enough estimate for this simple exercise. 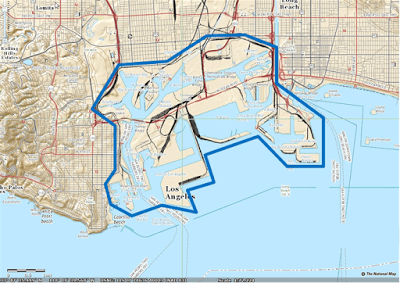 To give some regional context, I dropped the outline onto a map of southern Los Angeles County. On this map, the ports loom large, covering a pretty big area on the southern boundary that is about the size of city of Santa Monica. 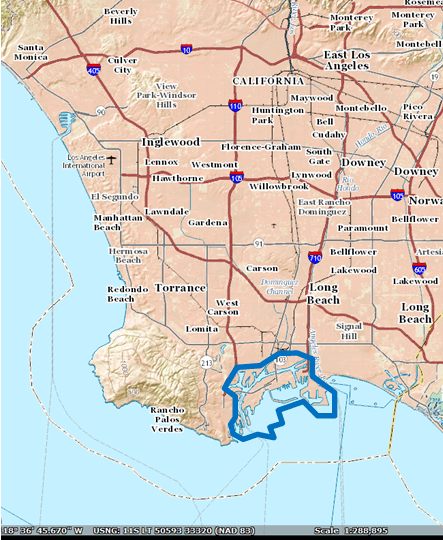 Next, let’s compare the ports to something a bit smaller than southern LA County: the City of San Francisco. The outline covers almost one-half of the city:  from the outer Richmond and Sunset to the eastern bayshore, from the Marina to Twin Peaks. 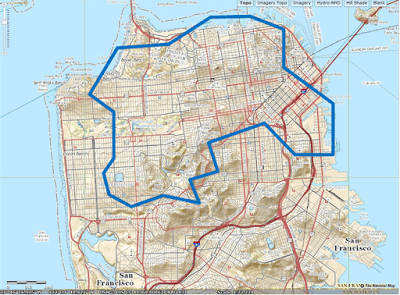 The next map puts the ports on top of parts of New York City, showing that they would cover Manhattan below Central Park, as well as the neighboring East River and a small section of Brooklyn. 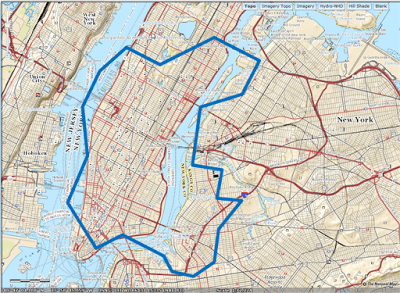 Of course, some caveats are in order. 1)  The ports are two separate entities that just happen to be next to one another, so perhaps a fairer look would consider about one-half of the outlined area.  Even in that case, each port is quite large, covering almost one-eighth of San Francisco or Manhattan below Central Park.  2) There is a lot of water within the boundary that I drew, which perhaps shouldn’t be included in port area.  On the other hand, these are shipping ports, so a significant amount of open waterways are necessary to bring ships in and out.  It would probably not be hard to find official statistics on port acreage and then create some equivalent size boxes (I’ll put that off until another day).   3) This post is a follow-up to my review of “The Box,” and the two ports handle more than just shipping containers. They also import and export bulk goods, odd-sized items, vehicles (via “roll-on, roll-off” ships), oil, and other non-containerized items.

All maps are from the USGS’s National Map project and are in the public domain.  Top and bottom photos taken by the author during a tour of the Port of Long Beach.